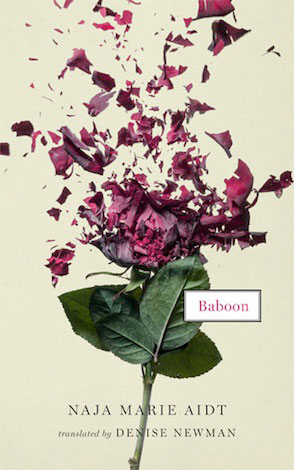 Bestiality, child abuse, love, depression, heartbreak: these are among the many subjects brought to life in Naja Marie Aidt’s story collection, Baboon. Aidt, born in Greenland, a resident of Brooklyn, writes in the intersection, the most dangerous part of the street. Her stories stand boldly in the overlap of the ordinary and the absurd, between the wondrous and the vile. Brave and masterful, it’s no wonder Aidt has won both the Pen Literary Award and the Nordic Council Literature Prize.

In the story “Candy,” Aidt puts everyday absurdity on fantastic display. A woman accidentally steals a at the supermarket, only to end up stolen herself. Things go from bad to worse when her husband, our narrator, fights to get her back from the store detectives; in the process, he’s injured, robbed, belittled, and jeered. Still, he fights for her, knocking over display cans of clam chowder and shouting at the manager, who only belittles him further:

“Sir, I’ll have to ask you to leave at once. The customers are disturbed. We can’t take responsibility for that.” “Responsibility!” I shook my head and clenched my jaw. I made a show of taking out my phone and calling the police. “Police!” I hissed so that he’d know I wasn’t pretending.

It’s only when he finally has his wife back that he realizes she’s no longer quite so worth the effort. And in this moment our valiant hero curdles into a petulant child. No longer is he the man who fought for his wife, but the child who wailed at having his candy taken away only to lose interest in it the moment the sugar’s dissolved.

Your face reminded me of an old ball that’s been kicked to death and left at the edge of a large green field. Misshaped, gray, and flat. I left you standing there and got in the car. I suddenly had no desire to touch you.

Aidt’s style, as translated by Denise Newman, is at once dreamlike and shockingly concrete. The story, “The Green Darkness of the Big Trees”—about a man obsessed with a garden, depressed and deep-feeling, who tumbles into a tortured non-relationship with a young botany student—embodies this energizing combination from title to last word:

It got darker, rainier, colder. I was stuck. A panic attack took hold of me. I woke up in the middle of the night with my heart in a wild gallop, terror-stricken, certain that my end was near. I sat at the edge of the bed in the dim light, feverishly checking my pulse, convinced that I was dead, that there was no relief, that eternity was here, on this planet, in this damp apartment, and I imagined that your last moment alive turns into eternity. The way lightning is materialized in a piece of glass. 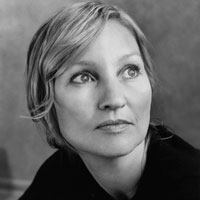 Again and again, Aidt proves that she is fiercely unafraid of the ugly and sticks her fingers eagerly into the depressed, the sexual, the scatological.

In “Conference,” a woman spots a former lover sitting nearby at a lecture and suddenly all the pain of their broken relationship comes hurtling back. Where other authors might linger in the narrator’s memory to show such pain, Aidt draws only sharp, swift connections between past and present—a hand clutching bedsheets in a moment of ecstasy, a hand clutching a luncheon tablecloth in a moment of nausea. And where other authors might focus on the moment of direct confrontation between the narrator and her ex to form the story’s climax, Aidt leaves our protagonist sitting isolated and alone, unable to think clearly as her ex doles out meaningless small talk before ignoring and shutting her out once more. Nor does Aidt feel it necessary to leave us with a moment of triumph when the protagonist might learn to move on or gain some modicum of closure. Rather, she only dives deeper and deeper into the pain:

And that’s what made me so desperate and angry. There’s only you. And I vanished. It’s physics. It’s like a tree that moans when the branches rub against each other but they can’t move away. One of them wears out and it falls down, only to decay on the ground. It’s physics that determines which branch must surrender. I fell long and hard.

But even as our protagonist works up the courage to finally “shout something hurtful and inappropriate,” to give a bit of voice to all this painful decay, what comes out isn’t a biting insult or cutting accusation. What comes out is a humiliating rush of vomit.