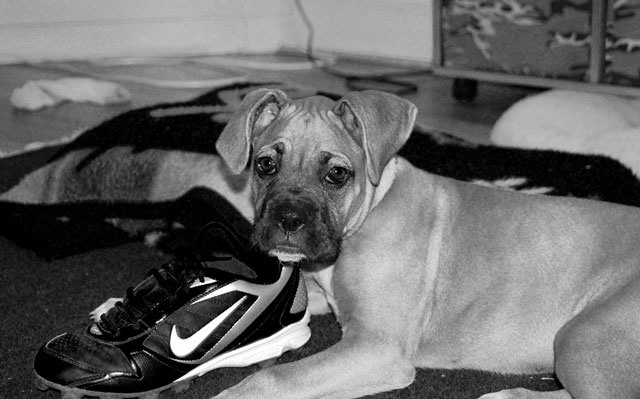 The vet returned my call as I was rolling the last wineglass in bubble wrap. In counterpoint to my curt hello, he sounded upbeat, even jovial. He explained that when Mags had been spayed last month, the operation had sent her hormones haywire. “That’s why she’s behaving like she’s pregnant,” he summed up. “It’s a textbook case.”

The “textbook case” was curled beside the stove in a cardboard box she had commandeered during my week of packing. She’d stuffed it with laundry from the overflowing hamper. Each time I approached, she whined.

“It’s all in your head,” I told her, shoving the phone into my pocket. “Snap out of it.”

Her eyebrows twitched. Then she sighed, wriggling deeper into the mound of dirty tees, her silky muzzle resting on her paws.

Alex returned with the U-Haul around one. After much hemming and hawing on both sides, I was making the move to his place. I updated him on Mags’ condition. In the several hours since the vet’s call, she had whelped. At her swollen teats were Alex’s favorite Nikes that she’d dragged from under the bed.

“Sorry, girl.” Alex crouched beside her, stroking her head. “I’m going to need those.” He reached into the box. Mags whimpered.

He swiveled on his heels. “They’re my only pair.” He spoke in the measured “let’s be adults” tone I no longer found in any way adorable.

He gazed up at me. His wary expression mimicked my own, each of us thinking: Last minute moving jitters or a bona fide fight?

A fly bumped repeatedly against a closed window. Then Alex freed a Nike from under Mags. “To me,” he said, “they’re sneakers.”

By the time Alex’s friends arrived to load the van, we weren’t speaking. It seemed absurd to break up over whether size ten Nikes were puppies or footwear, but apparently we were.

Alex returned the U-Haul, his friends trailing him, no doubt swearing their allegiance to bachelorhood. I left a voicemail on my landlord’s phone requesting to reinstate my lease and began unpacking.

Mags refused her kibble that night, leaving the box only to go outside for a quick pee. I left her plenty of water and climbed into my empty bed.

In less than a month Mags was back to sleeping by my feet, the sneaker pups long abandoned in the tangled nest.

I held one in each hand, debating what to do. Dump them? Donate them to Goodwill? In the end, I flung them into the deep reaches of the closet.

Sometimes, in the early morning hours, I hear them yapping. 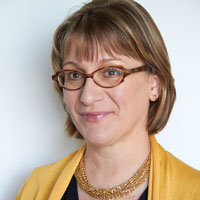 Catherine Nichols is a writer and editor whose stories and articles have appeared in a number of journals, includingVestal Review, flashquake, Every Day Fiction, and Monkeybicycle. Her most recent book, Alice’s Wonderland, explores the many adaptions inspired by Lewis Carroll’s classic. She lives in the Philadelphia area with her husband and their much-pampered pug.