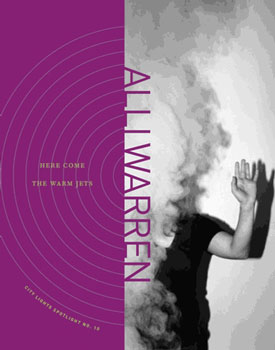 Diving into Alli Warren’s Here Come the Warm Jets is at once exhilarating and slightly overwhelming. Warren pulls no punches with this collection. The reader is at once plunged into Warren’s intricate linguistic code, and she does not wait for or expect us to get used to her from the start. The only comparable experience I can call to mind is seeing a Shakespeare play: the language is difficult to follow at first, being at a slight remove from our everyday speech, but by the end of the first act—or the first several poems, in Warren’s case—this wall has dissolved, and we are left free to absorb as much wonderful language as possible.

The collection shares a title with Brian Eno’s 1974 album, and this gives an immediate clue to how much cultural cross-pollination Warren plays with. I am sure I have missed more than a few references, but Warren gleefully includes rappers, fashion labels, social networks, and frequently sexual slang, sometimes turning on a dime from more high-minded language: “You look out on the estuary/and it is gross/full of sentiment/did she suck it or did/you just bang her…” This rapid hop-skip between stylistic codes makes reading the poems collected in Jets a frequently exhilarating experience, sometimes almost addictive, as each poem only confirms Warren’s cracking skill with words, and it’s impossible not to want to see what she does next. 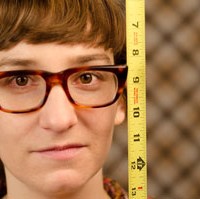 Warren also references social media with the most ease I have seen yet in poetry, mostly due to her decision to absorb its language to make her comments, instead of retreating to an ivory tower to proclaim doom from above. The lines in “Whose Rules Relate Regardless of their Names” begin with verbs that will be familiar to any Facebook user: “Join the group Work, Awareness of Death, & Sexual Conference…Become a fan of boat-like gliding…Poke the quadriceps/Poke the wild nettle;” in “Some Greater Social Sharing” we read about “two eyes fixed/on one profile / doing the pre-/emptive poke.” Such language is at once immediately familiar to a certain subset of readers, but seeing it in this context—printed on the page, not glowing on a screen—adds a layer of dissonance to that familiarity and asks us to think again about Internet-born language that has filtered offscreen and into our daily vernacular.

Gender and sexuality also wind like a thread through Warren’s tapestry of poems. In “Can I Prevent My Wages from Being Garnished?” we read about “a charming young thing/with big breathy icons”; elsewhere, “I stick my tongue in/and then I stick/my finger, forearm & mouth in/I venture all around,” “all private parts/precede and mislead/their patrons,” and “Terence and Will their concern/for purity of pussy.” The tone of these instances tends towards the slightly clinical, or maybe the skeptical; there is no sentiment about sex here, no romanticizing, and Warren frequently pairs these occurrences with meditations on class and monetary transaction (another overarching concern throughout the collection) which, to a certain frame of mind, is a perfectly natural pairing.

Although these observations bubble up in the reading of Jets it takes completing the collection to really get a fuller sense of cohesion, and this is because Warren closes the text with “Personal Poem,” a seven-page, glorious conclusion that immediately recasts all the poems before it and practically demands the reader return to the beginning and start again, for doing so lends a completely different feel to all the poem that came before it. It is difficult for me to articulate exactly why this is so, but “Personal Poem” takes the sort of poem children are often assigned in elementary school—Write a personal poem, about yourself, name things you like and believe—and turns it into a sometimes blistering, sometimes heartrending manifesto that exposes what forms the slightly messier underpinnings beneath Warren’s precision-cut earlier poems. There is no pretense of a “speaker” here, we see Warren herself, far more vulnerable than at any other point before: “Cultivate crushes and houseplants but not too many,” “If you lack confidence in your poetry don’t compensate with clothes,” “Astrology is real….Mercury retrograde will end.”

Such statements, delivered with the purity of belief that comes from learning after struggle, effectively deliver what might be called the abstract of the collection, the simultaneous summation and teaser, that clarifies while also enticing. It is at once a fantastic poem in its own right and also a superb decision about placement: at the beginning of a collection this poem would feel too obvious, in the middle, from out of nowhere. But at the end it allows all the poems before it to shed a little of their skin, to expose the softer parts beneath that are suddenly made vulnerable in any re-read, and this is a collection that begs to be read again and again, because Warren’s skill is one that only grows more apparent the more time a reader spends submerged in her poems.