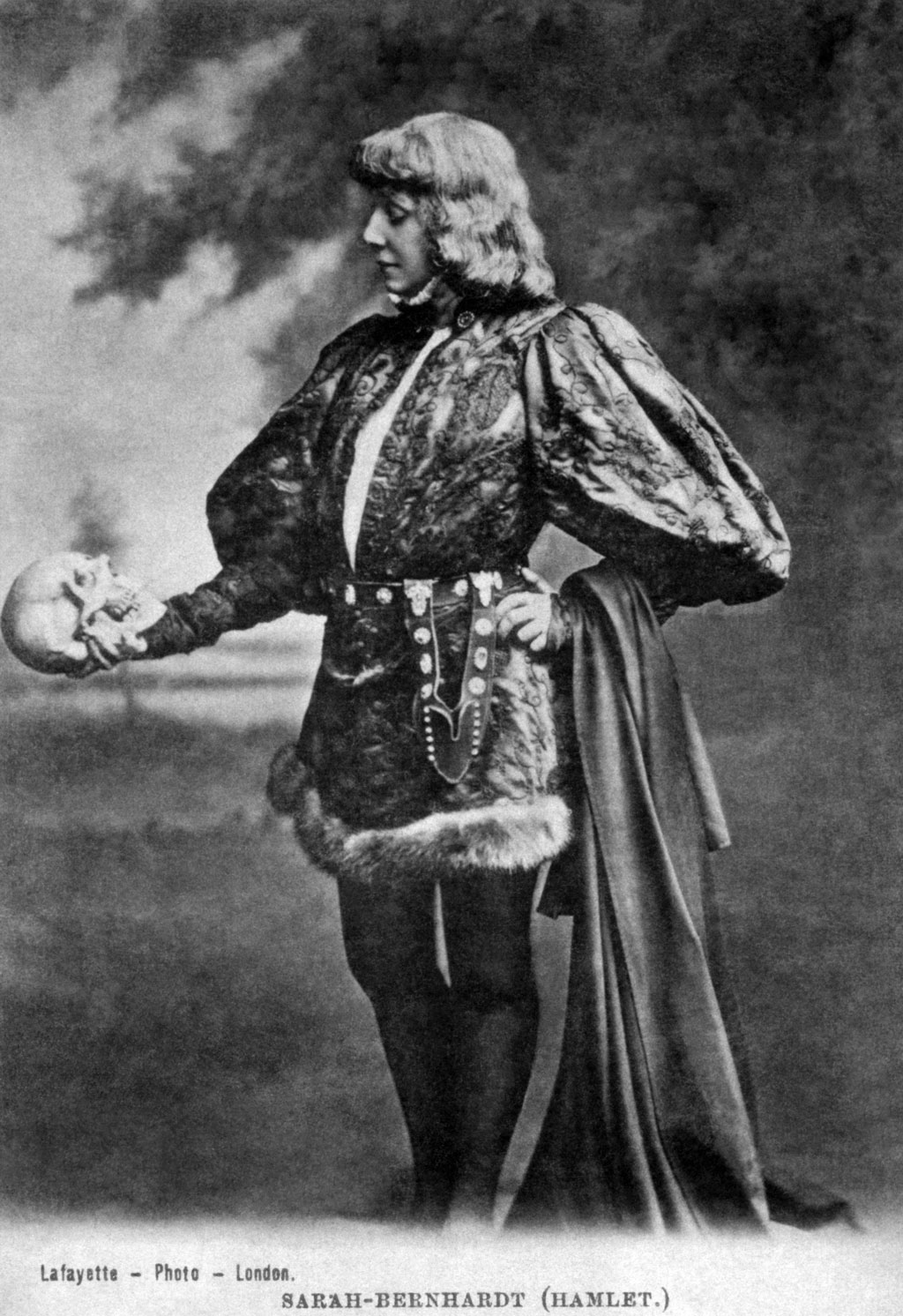 The last time I had seen a live production of Hamlet, I was a teenager, and I fell in love with the Melancholy Dane. He was beautiful and blonde and had one of those resonant voices, trained by the Royal Academy of Dramatic Arts. I learned all of Ophelia’s lines—this seems disturbing to me now, but then I played her over and over again in the privacy of my bedroom.

Nearly forty years later, I saw Hamlet again on the very same stage at the Canada’s Stratford Festival. This time, I saw a different play entirely. I was no longer in love with Hamlet, I was Hamlet. Watching the play from the dark shadow of my own depression, I recognized myself on stage. I could taste the flavor of Hamlet’s every mood because his moods were mine.

Just to be clear, the precipitating cause of my depression was not that my uncle killed my father and married my mother. It was more mundane and yet horribly painful: my husband of over 20 years left me for a much younger woman, with whom, I eventually learned, he had been involved for some time. Not tragic, just sad and disappointing and commonplace, and yet, because betrayal is betrayal, I felt what Hamlet felt.

The second Stratford production was both stylized and extremely naturalistic, especially when it came to how the actors spoke. No one declaimed, no one used British-y accents, the words were clearly and rapidly delivered in ordinary Canadian tones. The characters spoke as you and I do but using Shakespeare’s words, and thus those words gained an intimacy they all too often lack in stagier performances. And the lines of Hamlet’s first soliloquy, so familiar and yet so new in this plain delivery, went through me like an electric current:

Oh, that this too, too solid flesh would melt,
Thaw and resolve itself into a dew,
Or that the Everlasting had not fixed
His canons ‘gainst self-slaughter. O God, God,
How weary, stale, flat and unprofitable
Seem to me all the uses of this world.

Oh, I thought. That’s how I feel every single day. I wish I simply weren’t here, weren’t suffering what I suffer. People often call Hamlet suicidal, but he’s not; he’s perfectly clear that killing himself is not an option, and so, for different reasons, am I. To live in a world which has lost all its colors, flavors, and scents is constant pain, and he simply wishes to be out of it. There’s some critical debate around the word “solid;” some people think it’s a joke of Shakespeare’s at the expense of a presumably portly leading man, Richard Burbage. Some think it should be “sullied.” But “solid flesh” makes sense to me as I watch my own solid flesh diminish, ten pounds in six weeks because I have no appetite.

The speech ends when Hamlet hears his friend Horatio arriving: “But break, my heart, for I must hold my tongue.” And when Horatio, Marcellus and Barnardo enter to tell Hamlet about their encounter with the ghost, Hamlet is a different person. He’s energetic, enthusiastic, and affectionate. Throughout the play, the same transformation occurs. In the soliloquies, Hamlet is full of pain, crippled by it, but when others appear (the players, Rosencrantz and Guildenstern) he becomes almost manic:

You are welcome masters, welcome all! I am glad to see thee well. Welcome, good friends.—Oh, old friend! Why thy face is valanced since I saw thee last. Com’st thou to beard me in Denmark?—What, my young lady and mistress! By’re lady, your ladyship is nearer to heaven than when I saw you last by the altitude of a chopine!

He is courteous, jovial, friendly—and the players, who will become part of his plot to “catch the conscience of the king” have no idea what lies behind all of this bonhomie.

This too I recognize. I sit in my office, writing this, and I weep. And then I dry my tears and go downstairs and teach an absolutely kickass class on Antony and Cleopatra. I go to administrative meetings, and I am informed and competent and forceful and to the point. People ask how I am, and I say I’m fine. I perform fineness. I laugh I talk about ideas and books, about why I find King Lear disappointing, about politics, and I’m funny and I’m smart and no one can see the blank despair inside. Just like Hamlet, for whom the step from performing normalcy to performing madness is a small one, since both conditions are equally artificial. Hamlet is not insane. His mind works perfectly well, even if it works to his own perdition, as depressed minds do.

“The conscience of the king…” What Hamlet wants is to know that his uncle Claudius is truly guilty. Hamlet suspects but he doesn’t know. In fact, he suspects a great many things. How long have his mother and his uncle actually been sleeping together? The marriage of his mother to his uncle comes only two months after his father’s death. My husband’s new relationship started a few weeks after our separation. And before? Like so many depressives, Hamlet is obsessive. He can’t stop thinking about what might be happening between his uncle and his mother, in their bed, when it started, what conversations, what plans they might have made even while his father was living. He can’t look at poor, innocent Ophelia, because she reminds him of his mother. His mind runs always in the same patterns, and like Othello in a different play, he needs “ocular proof” which he gets when he observes Claudius’ response to the play within the play. He needs Claudius to recognize his own guilt and to recognize Hamlet’s recognition of it.

This too, I get. What did they say? When did they say it? What kinds of violations of a bond I thought secure were enacted? Around and around it goes, and Hamlet and I can think of nothing else. Everything turns back to this one thing. “The conscience of the king…” How I wish I could catch it, but to what end? What would it tell me to know?

And then the dreams, from the most famous speech of all: “To sleep, perchance to dream… Aye, there’s the rub! For in that sleep of death, what dreams might come?” Hamlet dreams of his father, of his uncle—in the recent production I saw, Claudius and the ghost were played by the same actor, a move so brilliant that I can’t believe it isn’t done more often. He dreams of his mother, and he dreams of Ophelia, but they all become interchangeable in the nightmare. I have dreams where my ex-husband presents me with a baby that is not mine, but is his, and demands that I take care of it; I dream that I’m with him on a ship, and he thinks he knows where we’re going, but the waves are crashing over us; and worst of all, I have dreams where we are together as we used to be, happy, laughing, walking together hand in hand, making love. These are the dreams from which I wake in tears.

Everyone knows how Hamlet ends, with a stage full of corpses: Claudius, Gertrude, poor innocent Laertes and Ophelia, and Hamlet himself. “Now cracks a noble heart. Good night, sweet prince, and flights of angels sing thee to thy rest,” says Horatio, the friend who has always loved him. But these days, I’m trying to imagine an alternate ending. In Act IV, the king sends Hamlet to England with Rosencrantz and Guildenstern, who carry letters that will ensure his murder upon arrival. They are attacked by pirates on the way. Hamlet is taken prisoner but ransoms himself, and the pirates bring him back to Denmark, filled with thoughts of revenge, while Rosencrantz and Guildenstern carry on to England and their own eventual deaths. I’m imagining a scenario in which Hamlet stays with the pirates, becomes their captain, and sails with them to the fabulous Indies (West or East, geography doesn’t matter here), living a life of bloody but satisfying adventure.

Or perhaps they maroon him on an island like that of Prospero, where “the air is full of noises, sounds and sweet music,” where he can reflect, like the philosopher he is, and walk on the silver sand and sleep in a bed of soft leaves and be quite alone and heal, and cease from dreaming. 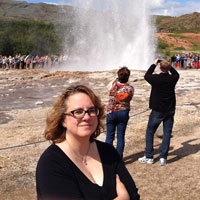 Born in Chicago, Maud Burnett McInerney grew up in Stratford, Ontario, Canada, where she had the opportunity to see nearly all of Shakespeare’s plays by the time she was twenty (exceptions: Timon of Athens, Henry VIII ). She teaches Medieval Literature at Haverford College but spends as much time as she can in in her house near Dijon, in France.