The main reason I drove four hours to be here was to sign a document giving me access to mom and dad’s security deposit box. Mom called it personal housekeeping. She said, you never know, Miles. What if something happens to your father and me? Somebody’s got to care for our affairs, and we all know your sister—. Well, you know what I’m saying, she said.

When we got to the bank, they couldn’t find the form we needed. The person who prepared it was on her way, but it would be thirty minutes. Mom suggested we go pick daffodils behind the old elementary school while we waited. I said we should forget the bank and flowers and go home and eat lunch. I told her I wanted to get an early start back to Richmond. But Mom said it was too important I sign the form. The school was right up the street and wouldn’t take long. Then she started in on how tall these daffodils were. They come right up to your knees, she said. Best daffodils in town and only a short walk away. Fine, I said. Let’s pick daffodils.

The sun warmed our backs as we walked through town, and Mom started telling me about Melanie’s latest mess. Her ex-girlfriend was pissed off because she stopped paying rent on the apartment they shared in D.C. Mom said the ex had called the house four times asking for the money, and that Melanie was hiding with another ex somewhere in Baltimore. Your sister sometimes, mom said. I just don’t know what we’re going to—. Well, you know what I’m saying, she said. It was her favorite way to end a Melanie story.

I hadn’t thought about Halifax Elementary since mom retired three years ago. For thirty years, she taught second grade at Halifax, and it was where I spent kindergarten through third grade. It was a grand old school. Three stories tall, with round, white columns across the front, and the whole building was dressed in dark, red brick. Mom’s last year teaching was the last year Halifax was used for a school. She said they couldn’t have kids going to schools with stairs in them anymore. They built a new, flat one across town, and Mom packed thirty years of teaching up in big brown boxes. They tried using it for administrative offices, but it didn’t take. Mom said it’s been empty for two years now.

Standing in front of the school I saw the toll the vacancy had taken. Dirty, white streaks ran down the brick façade, and the paint was peeling off the columns. The large boxwoods that framed the sidewalks were so tall they’d need a bucket truck to prune them back. They looked more like trees than shrubs. The place was just a mess. An absolute mess. But when I looked at mom, I saw something different. Expecting to see sadness or anger, she was smiling. It was like she was looking at something totally different. She still saw dozens of smiling, chirping little kids walking in straight lines with their backpacks and lunch boxes. She saw teachers huddled by the door, smiling and waving at the arriving children, telling stories about what this kid did or that kid said. She was unfazed by what the school had become.

There was one particular spot behind the school where the best of the best grew, Mom said. If we were lucky, they’d still be there, but we weren’t the only people in town that knew of them. We walked around the side of the school, avoiding the tall weeds growing up through the sidewalk and stepping over old twigs and limbs that had blown down from recent storms. It was funny. Somewhere between the bank and the school I got excited for the daffodils. I don’t know if it was all the decay and debris or something else, but I wanted to find these flowers. I wanted to find one thing that was still beautiful.

What we found was a long thick patch of green leaves and short, cut stalks. A couple daffodils were wilted and fallen over, casualties of the mass picking. There wasn’t one pickable flower. Not one. I was certain this would upset mom but again, she only smiled. And I knew that smile. It was the same one she had when she was teaching, the way she’d look at her students when they gave her a hug or said hello. Well, they sure got some beautiful flowers, she said. Looking at the size of these stalks and leaves, she said they were probably the tallest and fullest ones yet. I said nothing. I didn’t know what to say. The school was a wreck, mom’s cherished flowers were robbed, and we were waiting on a form that gave me access to my parents’ personal items in the event they died. Mom looked up at her old school, then turned and looked at me and smiled again. She asked if I had my phone on me. Why, I asked. She picked up one of the wilted daffodils, fluffed its yellow petals, and straightened its stalk. Then she walked over to the school’s brick wall and asked me take a picture of her holding the flower. 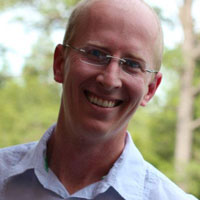 Daniel W. Thompson is an urban planner living in Richmond, VA, with his wife and daughter. His recent stories have appeared in Bartleby Snopes, Literary Orphans, and Jersey Devil Press.