“Dr. Zauze’s Xylophone” began as a postmodern prose piece in one of the many notebooks I kept while I was doing my master’s work at the University of California, Davis, back in the early 1980s. I was inspired by Sasha Sokolov’s A School for Fools, which I had read in Professor Daniel Rancour-Laferriere’s Soviet Literature course. Sokolov’s novella is told in the enjambed voice of a narrator who might have formerly believed he was more than one person—the entire narrative is characterized by multiple layers of reality and the malleability of time and identity. It had a profound impact on me as a writer, and so it was no surprise that “Dr. Zauze,” a name that comes up in Sokolov’s story, made it into my dream world nearly a decade later.

The comic book version of “Dr. Zauze” was inspired by my study of Chester Brown’s production method on his Yummy Fur comics. While I lived in Rochester in the early 1990s, I was working with James O’Barr and John Bergin, both very talented artists with remarkable and distinct styles. I was especially struck by their collaborative thumbnail sketches, and I decided to try my own hand at drawing a short comic book story for a journal called Brain Dead, which Bergin was editing at the time. I wasn’t very proficient as an artist, so I would spend weekend mornings practicing my drawing at the glass table in the huge dining room of the Victorian my wife and I had rented on Church Street.

I used a rubber-tipped brush pen, from which I could get incredible line variation, and I began to draw with the brush tip without doing any initial pencils underneath.

When I was drawing from photos, I could do a decent job, but I found myself to be a pretty dismal failure at doing anything resembling mainstream comic book art. That’s why Chester Brown’s idiosyncratic indie style appealed to me, especially when I learned that he would work on one panel at a time and then paste the panels on larger sheets of paper to lay out his pages.

The narrative of “Dr. Zauze” came to me in a semi-lucid dream. It wasn’t a cartoon, of course, but I couldn’t draw it realistically. Dr. Zauze, as a character, felt to me like a cross between Freud, a mad-scientist Einstein, a Gary Larson Far Side scientist, and Robert Crumb’s Mr. Natural, so I stylized him that way.

I finished around nine pages of the story, but then I got some paying freelance work adapting a movie into a comic book, and then I had no time to get back to it. “Dr. Zauze” was going to be the opening of a graphic novel about a character who lapses into a dream coma and has to make his way through a bleak dreamscape America to find his sleeping body and wake it up. I think I was going to call it Dreaming America, but those initial nine pages sat in my old portfolio until two years ago, when I used them as examples of Chester Brown’s production method for the comics course I teach at the State University of New York at New Paltz. Most of the scripting was gone—only a few word balloons had text in them, and I had largely forgotten what the fictional dialogue was supposed to be.

This fall I finally had the impetus to revisit the pages and resurrect them in their original form, not as fiction, but as a recollection of one of the many strange dreams I had had during the year I spent researching for Professor Aram Yengoyan. The Dreaming is very difficult to talk about, and I think the “Dr. Zauze” you read here will probably be the beginning of a book-length memoir about my experiences of researching dreams and practicing lucid dreaming.

Eventually, I would discover that lucid dreaming, the technology of remote viewing, and the phenomena of astral projection and near-death experience all converged in the same “place.” That would take me to a more sustained engagement with meditation practice and qigong, which I continue today. But in the meantime, I have this preliminary relic, a sort of souvenir of more naive times in the past filtered through my more current (and, I hope, more thoughtful) self.

And the xylophone? In the dreamscape, it was the distinct sound that would indicate the presence of the “Dr. Zauze” figure. Sometimes he behaved like the one in this story. Sometimes he was an archangel who threw me out of the world, and sometimes he was an old Taoist sage. The periodic refrain in my pomo novel would have been “The mellifluous madness of Doctor Zauze’s xylophone.” 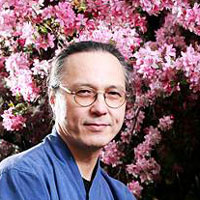 Heinz Insu Fenkl is a writer, editor, translator, and folklorist. His first novel, Memories of My Ghost Brother, was a Barnes & Noble “Great New Writer” selection and a PEN/Hemingway finalist. He serves on the editorial board of AZALEA: the Journal of Korean Literature & Culture, published by Harvard’s Korea Institute, and as a consulting editor to the internet translation journal, Words Without Borders. He is best known for his deconstruction of the Starbucks logo and his translations of North Korean comics. He teaches creative writing, comics, and Asian studies at the State University of New York at New Paltz.