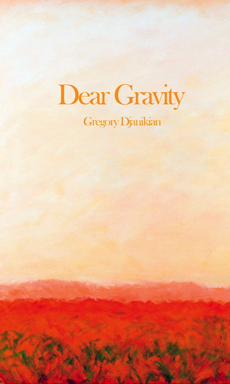 At the beginning of the fourth section of Gregory Djanikian’s Dear Gravity, in a poem titled “Beginnings,” the speaker, one of two “giddy / amnesiacs of the present” under the ‘disapproving glance of history’ gestures outwards:

Here’s a new window to turn to,
here’s a cloth to clean the mists (“Beginnings”)

Though the poem comes at the beginning of the penultimate section, it is in many ways a suggestion for how to read the entire collection: as one enormous room of infinite windows to turn to, an insistence on presence in each individual poem, and an acknowledgement that history, however disapproving, is unavoidable, in both poetry and in memory.

So many of those windows look out on landscapes and cityscapes, from Alexandria to Arizona to Philadelphia. Language preserves the memory and the feeling of those landscapes against one another and allows them to exist in the same poetic space. In “First Winter in America,” Djanikian’s speaker, experiencing the first snow and ice of winter, is suddenly afraid to forget the desert, and the language of the desert:

White eyelashes, white mittens,
I thought I could become
whatever I touched.

A year before, in another language,
I held the desert in my hand,
I tasted the iridescent sea. (“First Winter in America”)

The speaker has not only a new country and a new climate, but also a new language for the new set of experiences. The speaker is also anxious that the language is inadequate, incomplete, does not have the right words in either the old language or the new:

And I stayed where I was,
someplace I had no name for,
not for the snow or my standing still
and watching it fall. (“First Winter in America”) 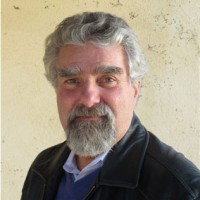 Language here is not just a communicative device, it is a forger of connections—connection as preservation and remembrance, connection as assimilation, and connection as the only cord between a boy sailing from Alexandria to Lebanon, a man reciting poetry to himself in the shower, and a man and his wife on a ranch in Arizona. The poetic impulse induces both anxiety when the words won’t come, and profound joy when they will. In “Why I Have the Radio On,” the speaker has forgone a family outing to stay in and work, only the expected “significant work” won’t come:

Djanikian lovingly writes of the “first efforts,” the early fumbling poems that want so much to say something but fail under the weight of language that takes itself too seriously:

And what about that immense
celebratory “Ode to Coffee,” the spoon
in its cup rising like a mast of insight
from the dark unconscious

Isn’t comforting to know
that the malarial cloud
of bad writing can linger anywhere? (“First Efforts”)

The ghosts of poems that didn’t work linger over “First Efforts” and “Lost Poems,” which ring with a pain just as acute as the pain of losing Alexandria. The anxiety of the “wrong words” isn’t a failure of poetic talent or work, it’s a failure of language to render memory “just right.” The wrong words, the failure of recollection, operate a little like the pivotal “My Uncle’s Eye,” in which a young speaker covers one eye in an attempt to see as his one-eyed uncle sees, but in fact can be read as an analogy for a preemptive linguistic recovery of the ‘hazy edges’ of memory, once those edges inevitably begin to blur:

And I was practicing how to move
the way he moved, skimming along
hazy edges, judging distances
by inkling, relying on some part
of the tangible world

without knowing exactly
what to hold on to,
what to let go. (“My Uncle’s Eye”)

But eventually, the speaker settles down, settles into language with an ease that comes only from letting go of the anxiety of the exact word:

Now the sky is roiling
into a storm which, I’m sure,
has a name, but “storm” is just
what I want to call it,

as large a noun as I have
to account for every unexpected turn
maybe veering my way. (“On a Nature Walk in the Southwest Desert”)

The poems of Dear Gravity are surprising, hopeful, heartbreaking, and clean. Djanikian’s poems reminds us that language is the gravitational pull between the furthest reaches of imagination and real experience and memory, and these poems exist in and push at the limits of that intermediate space. Ultimately, memory and experience can be rendered only in language, and all that matters is who does the telling—or really, the writing, as he writes in the most stunning, fluid, open poem of the collection, “The Book of Love”:

go ahead read it out loud even if several paragraphs
were missing even if all the pages were blank
and the story would have to be told
by heart as if I had written it. (“The Book of Love”)