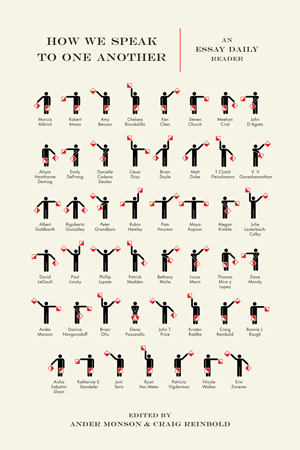 HOW WE SPEAK TO ONE ANOTHER: AN ESSAY DAILY READER
edited by Ander Monson & Craig Reinbold
Coffee House Press, 309 pages

The oldest post on the Essay Daily blog is from Monday, January 18th, 2010, by Ander Monson, who taught at the University of Arizona and teaches there now. It’s a list of essays included in the Indiana Review 31.2:

The next day—Tuesday—there are six posts, all by Monson, and some of them are lists. One of them is titled, “A word about the space,” which he defines as “a collaborative space to talk about some of the better (by which I mean more interesting) essays to appear in the literary journals that publish the majority of what we like to refer to as creative nonfiction, or literary nonfiction.”

“If you’d like to talk,” writes Monson, “about an issue, a journal, or an essay (or a trend in essaying) that you’re hot and bothered by, this would be a good space for that.” Essay Daily’s first anthology, How We Speak to One Another, is proof, seven years later, that plenty of essayists are hot and bothered and willing to talk about it. The names that appear in this collection are a testament to how successful Monson’s project has been: Robin Hemley and John D’Agata, Phillip Lopate and Brian Doyle and Rigoberto González, among many other notables.

How We Speak to One Another, which came out this month, is a book of essays on essays, on the Essay—that sprawling mountain of a form, reaching its roots into every fallow field. The reader sinks in to find Ander Monson digging his way: “I’d thought of my own essaying as mine work, a kind of solo exploration down here in the dark. But then one time I was chipping at a hunk of rock, watching my tool spark, and suddenly it broke through a wall and ran into another tunnel.” The tunnel is John D’Agata’s. This kind of encounter, told in one of Monson’s quirky conceits, is representative of the rest of the anthology. These essays are excavations in what the Catholic monk and writer Thomas Merton called (in his last address, just two hours before his death) the “interdependence of all living [and dying] beings.”

These essays offer conversation that skips the bullshit. “What ails you?” Asks Julie Lauterbach-Colby, author of In the Same Bite: Essays on Food and Death (Lulu.com, 2011). “How do you suffer in this life? If you are able to get to the heart of the matter, will you know why you are in pain?” When Emily Deprang talks back to silky-tongued Joan Didion (“Oh Joan”), she gives readers permission to question their idols: “Didion wrote that barricades are never personal, but as middle-class white women, it’s more accurate to say few barricades’ successes or failures touch us personally.” And speaking of back-talking, here’s what the twenty-seven-year-old Lucas Mann has to say to Phillip Lopate (who also appears in the collection): “I think we secretly love an essayist who writes young.”

Even simply from an organizational standpoint, the collection is remarkably well-curated as a conversation. González, who writes, “When they visited the after, they did so as strangers to the streets they no longer recognized and to the people who no longer remember them,” follows Fleischmann, who writes, “We have not yet let the past we didn’t have go.” Pairings (or groupings) like this one occur in the collection repeatedly as the essays, and essayists, speak to one another.

For example, D’Agata is (once again) teaching his critics how to read his work. Using Ansel Adams as allegory, he quotes: “‘Photography is really perception…As with all art, the objective of photography is not the duplication of visual reality, but an investigation of the outer world and its influence on the inner world….All my photographs are photographs of myself’.”  What Columbia University’s Meehan Crist writes in the following page, even though she’s talking about Oliver Sacks, reads like a translation of D’Agata’s Adams: “He has still seen what he has seen…Rules are only useful if everyone is playing the same game.”

As the conversation here is both broad and deep, there’s something for everyone: muscle cars and fencing, science-fiction and sex and sighing, some prose and some poetry and some playwrighting and some graphic narrative about feeling young and insufficient, about feeling old and insufficient, and of course there are lists upon lists. But maybe that’s missing the point, because what this collection says is that all of it belongs to everyone: “A thing never happens once. A thing happens all the time, is still happening right this instant—to us or to other people,” writes the medical essayist Katherine Standefer. The more of others’ stories I know, the more I begin to realize that all reality coalesces.

This collection confirms what Ander Monson suggests in the introduction: each essay is one in a network of intersecting tunnels, forming a landscape of ideas and experiences about what it means to be human. These essays offer, in the words of novelist V.V. Ganeshananthan, “the sensation of reading about myself.”

ON THE EDGE, a novel by Rafael Chirbes, reviewed by David Grandouiller

BETWEEN LIFE AND DEATH, a novel by Yoram Kaniuk, reviewed by David Grandouiller