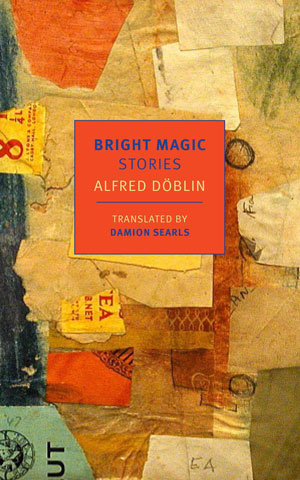 Bright Magic—a powerful concoction of black humor, harsh beauty, and dark fabulism—marks Alfred Döblin’s first collection ever to be translated into English (here by Damion Searls, a master of his craft who’s also translated the works of Proust and Rilke). Döblin (1878–1957), now a classic of German literature, was a pioneer of expressionist writing as well as a respected neurologist and army doctor.

His short stories show a tremendous bravery of form and a willingness to experiment with things that today would be called flash and micro fiction as early as the 1910s. He also demonstrates a deep desire to mirror the absurdity of all that surrounded him—the horror of world wars, the destructive power of ignorance—by wielding absurdity in his stories like a joke, a sword, a punishing assumption. In this collection, we see Döblin lift up fascinations with memory and things forgotten, with morality and violence, with descents into madness and those dizzying moments of painful, exquisite clarity.

In “The Ballerina and the Body,” Döblin explores the body’s tenuous relationship to the mind. Studying to become a ballerina, the young Ella “learned how to compel her elastic ligaments, her too-straight joints; she crept in, warily, patiently … kept careful watch over the play of her taut body,” until one day “a pallid and lingering disease” takes over, stealing not only her ability to dance but also her ability to “compel” or control anything:

She went to the hospital the next day. In the carriage she sobbed with rage beneath her blanket. She wanted to spit on her suffering body, she jeered at it bitterly; it disgusted her, this bad flesh whose company she was bound to. Her eyes widened with muted fear when she looked at these limbs now eluding her. How powerless she was, oh how powerless she was.

In the hospital, her body forgets everything she’s taught it, reverting to a whining, tantrum-throwing child that Ella cannot help but simultaneously resent and pity:

The body kept lying, a piece of carcass, under her; its pains were of no concern to her. When it stabbed and tormented her at night, she told it: “Calm down until the rounds tomorrow; tell it to the doctors, your doctors, and leave me alone.”

The story contrasts the theatrical tragedy and drama of a prima ballerina with the graceless routine of prodding doctors and praying nuns, the dramatic potential and expectations of the mind with the cruder, “base” demands of the body. It’s a story of realizing too late that you’ve been dancing a duet all along, that you’ve been responsible your entire life for the stewardship of something you never even truly acknowledged—and now it’s taking the lead. Now it’s stealing your light.

Though Bright Magic contains several lengthy stories, such as “Materialism: A Fable” and “Traffic with the Beyond,” the majority of the collection is made up of crisp tales that are at once deeply entrenched in the issues of Döblin’s generation while still holding a chilling relevance for today. “A Little Fable,” which we might call flash fiction, presents an unnerving, darkly comical scene of thoughtless citizens happily surrendering their rights and freedoms to governments who happily accept, all while singing a pretty tune to their people of freedom, respect, and honor:

And just as those in the country of Tongue-Tied respected the word and honored language so highly, the people of [the Duchy of Freedom] to the south celebrated freedom so much that they kept it locked up in an undisclosed location in the ruler’s own castle and never let anyone get near it. … [The Duke] always kept his jails and penitentiaries full in [Freedom’s] honor, for where can anyone learn to respect freedom better than there, he said, where they have to do without it.

However, it’s the final five short pieces in this collection, gathered in a section called “Incomprehensible Stories,” that most captured my attention. And, indeed, there is an air of the incomprehensible about these tales such that I could imagine any one of them finding a comfortable home in literary theorist ) anthology, Anti-Story—an anthology dedicated to exploring the merits, beauty, and strength of truly experimental fiction.

“The last thing we expect of a fiction,” Stevick argues, “…is that it will talk to us, mocking our banalities, or shift without preparation between a kind of lunatic fantasy and a precisely calibrated and perfectly credible realism, or stop after fifty words.” And maybe this is where so much of Döblin’s lasting power derives from: his ability to constantly give us the very last thing we expect from a work of fiction.

It’s fitting, then, that these “Incomprehensible Stories” continue to surprise. In “The Library,” a chimney sweep realizes he needn’t bother with actually reading any books; all he needs to do is linger within the library building itself, absorbing knowledge straight from the atmosphere, as a plant would do with sunlight. In “Max,” a girl’s mother gives her a dress made of glass before adopting a friendly hippopotamus to serve as the girl’s brother. Then, to button the entire collection, there’s “What People Mean by Cow’s-Cheese,” which is perhaps the funniest, most self-aware, most self-deprecating ending to a short story collection I have ever encountered: To learn what people mean by “cow’s-cheese,” Gregor Gregorovich opens a book and begins to read—only to discover that the book refuses to discuss anything but ancient Greece. Realizing the book will never be what he wants or expects, he slips it closed once more.