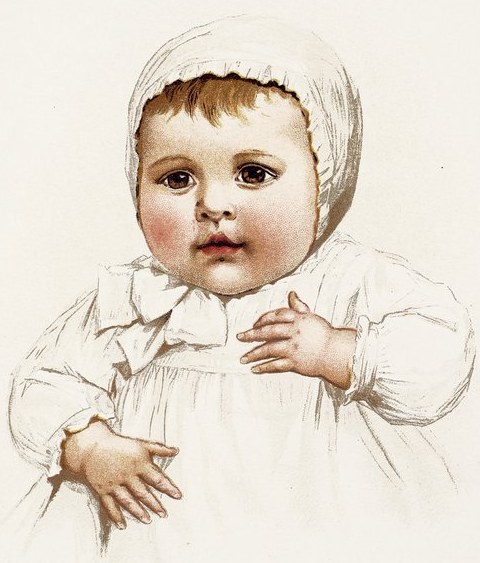 We are looking at pictures of my cousin’s new baby. My cousin is nineteen. I am thirty-two. My cousin is eight months pregnant with her second child. I’m on my period.

Everyone agrees that yes, it would have been better if Carly had finished college before having two babies, but my goodness, Damien is gorgeous. In every picture he’s grinning, exposing a row of short white teeth. At eleven months he already has a head full of brown curls that would resist being flattened by a wool hat. They’re so wondrous I imagine he could frolic all day in a pit of plastic balls and not one spark of static electricity would attach to them.

I have been married for three years, but we’re not getting anywhere, baby-wise. Our apartment is too small and full of pointed angles. Our credit card balances are bloated. And then there’s our red wine habit. My husband complains all the time that we’re too poor to have children, but I’m not sure I know what that means anymore.

Once as an experiment I replied, “Maybe we’re too poor not to have children.” He looked at me and said, “I can never tell when you’re being serious.”

“He’s not completely white,” says my grandmother, passing me another photo of Damien eating spaghetti, “but that’s all right.”

I mumble something about mixed-race people being more attractive than average, but later I think that might be just as racist.

Not many of us in the family have met Donald, my cousin’s boyfriend, so it’s hard to say “what” he is. I don’t think he’s black, at least not completely. Maybe Latino. Whatever he is, he can make a great-looking baby. He’s staying home with Damien while Carly goes to cosmetology school, so they’ll look great all the time, forever. He seems like a nice kid and they’ve made their bed so we’ve all learned to stop shaking our heads and saying, “what a waste.” I, however, continue to use Cousin Carly as a punch line at dinner parties, to prove what I’m not sure.

Carly and I aren’t actually related by blood. My aunt married her father when Carly was a little girl. Carly’s birth mother is a drug addict who left Carly and her father years ago. We don’t know much about her. My aunt has no biological children of her own, but we can all see she loves Carly like a daughter. It was my aunt’s dream for Carly to be the first in her family to go to college, and together they made it happen. She made it through one semester before she met Donald.

There are easier ways to make a baby. 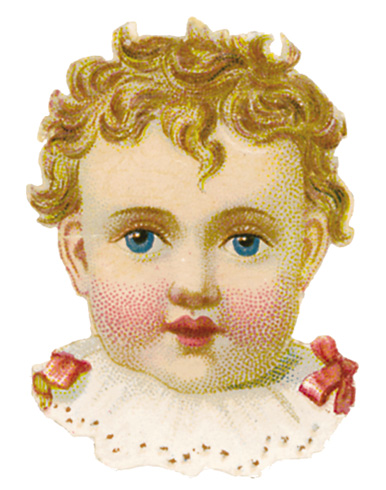 My husband and I have a plan to get me pregnant in a year or two. If we wait much longer we might have a baby that has, you know, needs. Needs we aren’t equipped to handle. Last week we bounced a check on his student loan payment, and my husband wondered aloud how we were even going to afford day care at this rate. He’s sensible, but it annoys me. I catch myself wondering if it would be easier to start over again. I got scholarships.

So far no one in the family has bothered us about it. I wait for them to eye my wine glass during dinner, but my aunt fills it nearly to the brim with Pino Grigio without even asking. I don’t really care for white but I drink it anyway, just to have something to do.

“When are you two going to have a baby?”

Sometimes it bothers me that they don’t ask. I wonder if they’ve given up on me already, like we’ve all given up on Carly and college.

“Look,” says my grandmother, pointing at the photo in my hand. I’ve passed a few along without really looking at them. “Doesn’t he look just like his grandpa there?”

And I have to admit, Damien does look just like my uncle when he laughs.

A few days later I’m standing in line at a kosher market behind a young Hasidic woman and her three children. There are children all over the store. Some of them are piling into minivans outside, some of them are clutching onto the sides of strollers like suckerfish attached to a shark as the mothers wheel through the aisles, sometimes as many as four children to a stroller. The young woman in front of me pays for her groceries with food stamps. I pay with cash. Before I have my change she and her children are out of the store and making their way down the sidewalk. A little girl with light brown curls — like Damien’s, but longer — runs to catch up, reaching her left hand out for the stroller. Four children altogether.

When I get home with the groceries there’s a card from my mother. It says “Spring Has Sprung!” on the front and inside there’s a check for fifty dollars. In the memo line she has written, “For a nice dinner.” I affix the check to the refrigerator with a magnet so it won’t get lost, and a photo of Damien and his curls that had been tucked behind bills and postcards slips to the floor. With the tip of my shoe I nudge it under the refrigerator. 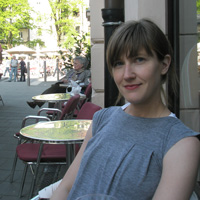 Kat Carlson is a Brooklyn-based writer whose work has appeared in Vol. 1 Brooklyn and Fiction Writers Review. After four years in the editorial departments of St. Martin’s Press and Viking, she moved to the other side of the desk to earn an MFA in Fiction from the NYU Creative Writing Program. She now teaches in NYU’s Expository Writing Program and is wrapping up work on her first novel. Follow her on Twitter:@katcarl.