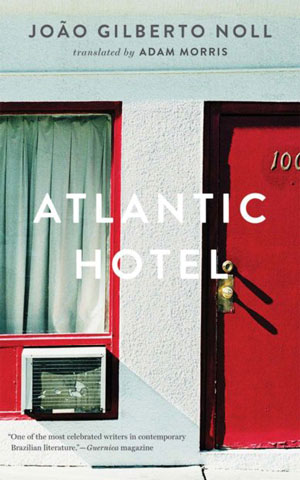 This is the closest that readers get to a name for the protagonist and narrator of João Gilberto Noll’s strange little book, Atlantic Hotel, recently translated into English by Adam Morris. The novel is set in Brazil in the 1980s, and over the course of the book, the unnamed narrator embarks on a beguiling and pointless quest through the country. At different points he will seem to be—or perhaps will be—an actor, a priest, an alcoholic, an invalid. Along the way, Noll will shade his experiences with touches of Don Quixote and Odysseus, hints of The Stranger and a taste of the pantomime and absurdity of Fellini’s early 1960s films (Noll’s unnamed narrator a believable stand-in for the existentially angsty characters usually played by Marcello Mastroianni).

And yet for all the interesting things that could be said about Atlantic Hotel, this review is written in shadow. On March 29, 2017, just a little over a month before the release of the new English translation of Atlantic Hotel, João Gilberto Noll passed away in his home city of Porto Alegre. He was 70 years old. He left behind nearly twenty books and a legacy that stretches from his home country of Brazil to Germany, the United States, Italy, and the UK—all places where he held teaching positions or residencies—and into the many other countries where his work has been published in its original Portuguese and in translation.

As the Center for the Art of Translation, where Two Lines Press is housed, noted in a brief article on his death, Noll was simultaneously an international author and one deeply steeped in his native Brazil. Many of his novels, such as Atlantic Hotel, one of his most famous, are set in Brazil, and rarely the Brazil of the upper classes, or of Copacabana Beach, rich tourists, and ex-pats. Instead, his integration of “lower class” language and characters has made some of his work controversial among critics in Brazil, but it’s also in part what has made his work so compelling.

Atlantic Hotel is no exception. The middle aged male narrator spends the book wandering Brazil from city to city, encountering strange individuals, visiting dive bars, having sex, and overcoming a series of obstacles, like Odysseus on his way back to Ithaca. Except, as far as the reader can tell, the narrator has no Ithaca, no Penelope, and no suitors to defeat. He is a hero without a quest. And, it would seem, without much of a moral compass. Without really any kind of compass.

The experience of reading Atlantic Hotel is a bit like flipping between a very literary, sparse short story and well-written genre fiction. The characters have a hint of the cartoonish about them. Take this bit of narration, “Nelson spoke in enigmas. But all the words he was saying, the house, it all seemed to me like something out of an old film.” I can almost hear Bogey’s voice reading these lines in voiceover, while on screen he walks through the fog filled streets of an ambiguous city. But somehow, the campy quality, the cliché, manages to come off as smart and sleek. The narrator, I feel, is a bit too smart for his own good. He makes the lurid, bizarre world he traverses feel symbolic and satiric instead of hackneyed.

And like many works of mystery and noir fictions, sex and the possibility of sexual violence, haunt nearly every page of Atlantic Hotel. As in a Henry Miller novel, the sex is described in explicit detail, but in a way that is not necessarily erotic. In fact it is often transactional, as in this early passage: “As soon as I had her undressed, she got down on all fours atop the dirty green carpet immediately. I kneeled behind her. My mission: to mount from outside her field of vision. No touching above the waist, just anonymous haunches seeking each other out pathetically.”

At times, Noll’s sex scenes verge on a terrible cliché: using sex to show a character’s “depravity,” and this is one of the most disappointing aspects of Atlantic Hotel. The other is the way that Noll handles the women involved in these sexual acts. Women seem to exist in the novel, or at least in the narrator’s mind, solely for sexual purposes. And in that way, it doesn’t seem like Noll, or his narrator, have come very far from the hardboiled stories of heartless men and buxom dames with which Atlantic Hotel has a strange kinship.

And yet, there is something light, almost effervescent, which hovers above the narrator and gives him just enough anxiety, just enough quirk, to complicate the story. The only other recurring appearance of a woman is in the narrator’s dreams, where he is often a woman. Of one such dream, he recalls, “Sitting atop some dunes … I was a woman from the twenties. But unlike the films of that era, nothing was in black and white. Almost everything was a shade of gold, but with pink splotches.” In the back of a cab, he apologizes to the driver. What for? the driver asks. “For being who I am,” he replies. The narrator’s sadness and humility make his wide-eyed, in-the-moment narration more compelling than it might be otherwise. It is the narrator’s perceived innocence—an innocence that the reader can tell is not wholly truthful—that allows the mystery in Atlantic Hotel to feel like it has some structure beneath it. Noll tells us next to nothing about the narrator’s past, but just gives us enough of a hint to convince us that he has one.

Atlantic Hotel, at its very core, was a book that intrigued me, and that, in unexpected ways, made me care about it, even though I’m not sure I would say I liked it. It reminded me of a comment that Roger Ebert made about director Werner Herzog, “He has never created a single film that is compromised, shameful, made for pragmatic reasons or uninteresting. Even his failures are spectacular.”

And while Atlantic Hotel is far from a failure, it is the kind of book that is unique enough, bizarre enough, that the words “good” and “bad” don’t seem to apply. Reading Atlantic Hotel gave me the sense that I would be willing to follow Noll to all sorts of possibly unsuccessful places. Because even if I wouldn’t entirely enjoy the experience, he’d make it worth my time. He will be missed.

QUIET CREATURE ON THE CORNER, a novel by João Gilberto Noll, reviewed by KC Mead-Brewer