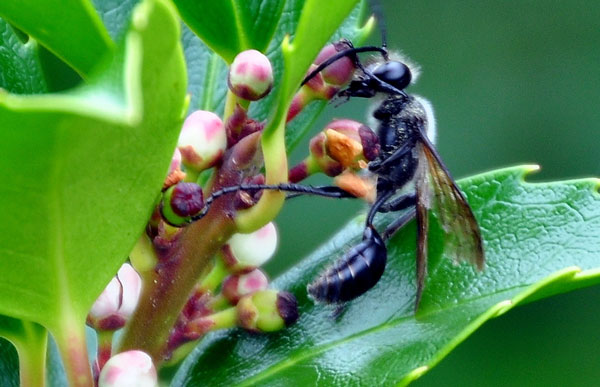 An organ pipe mud dauber is building a nest in the ornamental tin-roofed wren house Cheryl hung by the door. I hear her stridulating at her masonry work, and see her carry a small ball of mud into the bird house, a first for me, even though I’ve casually watched her predecessors for years. Our paths are bound, by simple proximity, to intersect before long. One day she emerges just as I step outside, rockets up, appraises me, hovers motionless at point-blank range. I freeze. She stares me in the eye. I gain a more mature understanding of “in your face.” Iridescent steely blue-black, she—an insect—has goddamn presence. Even though I outweigh her by roughly 343,000 to one, I’m the one who backs down. I inch my hand up to make the Vulcan “live long and prosper” sign and will my body to slide backward several centimeters. Appeased, she resumes her business. I breathe.

My wishes for her prosperity are sincere—anybody who feeds spiders to her young is OK with me. Sad to say, I see her only a couple more times. Though I easily could have missed her first appearance, her tenure seems too short. These wasps are supposed to be quick workers, but I still fear she may not have died in her sleep. Web sources say she abandons the nest when egg-laying is done, but are mute on her subsequent life. Does she die immediately? Live until the first frost, pollinating flowers and sipping nectar? Some weeks later I spot another of her species ravaging a stand of goldenrod. This one’s eating, I think, and she’s probably still laying eggs. My chance observation suggests that my girl, her work uncompleted, met her nemesis in a bird, a car’s windshield, or even a nasty microbe. Come spring, I’ll watch the wren house for her children, and tell them how I met their mother. 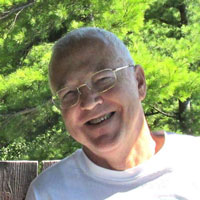 Ray Scanlon. Massachusetts boy. Has grandchildren. Extraordinarily lucky. No MFA. No novel. No extrovert. Not averse to litotes. His work has been published recently in Prime Number Magazine, Camroc Press Review, and Stymie. On Twitter: @oldmanscanlon. On the web: http://read.oldmanscanlon.com/.