My visual and textual work tends to be palimpsestic; layered, erased, meaning bleeding between frames and lines. I am interested in what is left unseen or unsaid, hidden in the density of image and language. I am also interested in construction and deconstruction as methods of visual and textual composition. I build from found audio, video, objects, and texts; disassembling and recontextualizing them, often using appropriation to resist or subvert asymmetrical power structures.

Active Conflict Zones is one such project, a series of visual poems constructed with language appropriated from Executive Order 13780, Protecting The Nation From Foreign Terrorist Entry Into The United States, and screen captures of digital video compression artifacts found between frames in Battle Beyond the Sun, an Americanized, English-dubbed, version of the 1959 Soviet science fiction film Nebo Zovyot.

I found hidden within the language of security in Executive Order 13780 the underpinnings of a xenophobic worldview that simultaneously aspires toward empire. In the text of the poems I sought to lay bare the underlying mechanics of power inherent such colonial impulses, and in the visuals I sought to subvert the legitimacy of claims to security from an administration compromised by foreign power. In attempting to hide the Soviet origins of the film Nebo Zovyot the American director of the retitled Battle Beyond the Sun replaced Soviet spacecraft with U.S. ones, obscured all text that appeared in Russian, and replaced the names of Soviet actors with those of English voiceover actors in the film’s credits; the screen-captured compression artifacts, the bleed through of data between the video’s keyframes and the P and B frames (usually hidden and containing only partial information from the surrounding frames), for me served as visual metaphor. —Francesco Levato, June 2018 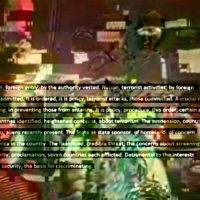 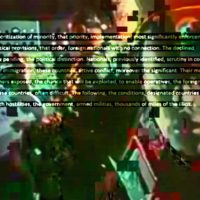 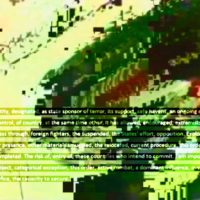 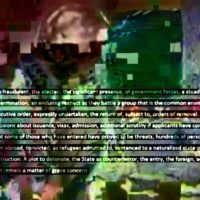 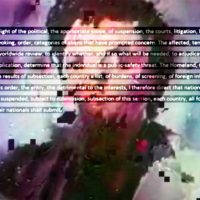 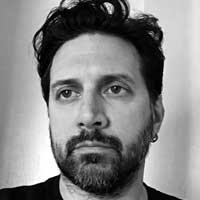 Francesco Levato is a poet, a literary translator, and a new media artist. Recent books include Arsenal/Sin Documentos (forthcoming 2018, Clash Books); Endless, Beautiful, Exact; Elegy for Dead Languages; War Rug, a book length documentary poem; Creaturing (as translator); and the chapbooks A Continuum of Force and jettison/collapse. He has collaborated and performed with various composers, including Philip Glass, and his cinépoetry has been exhibited in galleries and featured at film festivals in Berlin, Chicago, New York, and elsewhere. He founded the Chicago School of Poetics, holds an MFA in Poetry and a PhD in English Studies, and is currently an Assistant Professor of Literature & Writing Studies at California State University San Marcos.