I. Towards a New Empathy

A couple of years ago, Leslie Jamison and Francine Prose debated in The New York Times about whether or not it’s ethical to use your children as literary fodder. They discussed the demerits of transforming real life into words on a page in a pair of pieces titled “Is It O.K. to Mine Real Relationships for Literary Material,” and the conclusion seems to be this: that real people get stuck on the page, often one-dimensionally, trapped like mosquitoes in amber.

I know a few real people I’d love to trap. For all of its hardships, writing’s appealing in no small part because it allows one to pin down an idea like a butterfly in a shadowbox, to memorialize whatever or whoever you find worth remembering, in whatever state you might remember them. That prick you knew it high school gets his comeuppance, even if it’s only to an audience of several Facebook friends or readers of a literary magazine.

Tempting as it is to play God (albeit a fairly unimportant one, bound to the MLA Handbook), it was memoirist and poet Mary Karr who instilled in me an appropriate fear and reverence. In a piece for The Fix, she said, “Everybody I ever wrote about, including David [Foster Wallace], I talked with in advance and said, ‘This is what I wanna do.’… I wasn’t going to use his name, then after he died, I’d talked to him before he did it and included him enough that I was gonna give him a pseudonym—which he said he didn’t care about…” I puzzled over this in the back office of the bookstore where I was supposed to be doing other things. What do we owe the subjects of our work, especially those without masks? I’d always found Mary Karr brave for the way she broached her subjects, receiving the permission of her wild and alcoholic mother (with whom she’s reestablished a relationship).

Caught in this web of ethics, it might seem that the question of how and why we write about other people — especially people we love, or loved, or might have loved — could be sidestepped like a pile of dog shit in the street. It’s so easy to shunt these people out of a story; why bother?

There has also been a rash, in recent years, of confessional memoirs whose use of the pronoun “I” reads like the staccato, relentless sound of rain. I I I I I I I I. I thought, I felt, I sensed, I cried, I wondered. These books are an exercise and an exorcism, committing to paper every demon and insecurity that can be penned in so many words. As readers, we get to know one character, the ego at the center of the story, who is orbited by a few bare-bones personas, included for their impact on the narrator’s life and not much else. Oprah’s book club goes for these (see: Wild), as do hundreds of thousands of readers and bookstores that report to the Times’ bestseller list. They’re successful, despite what some of us (see: me) perceive as a dangerous self-centeredness, a vapid belief that the “I” at the center of a story will always be the most important and riveting thing.

I’ve thought about writing a lot since my first second grade poem, the one about the racist crayons who eventually came to celebrate their superficial differences. Until adulthood, those thoughts were fleeting and unimportant. In college, there were rules: “Write what you know.” “Show, don’t tell.” More recently, with my undergraduate fiction classes in the rearview mirror and 40 hours a week in a bookstore, the thing that I search for in novels and memoirs is an ability to escape myself. “Write what you know,” my favorite professors always cautioned. They weren’t necessarily wrong is steering me around the usual amateur pitfalls – over-ambitious trans-European epics, intimate short stories about divorces and adult things of which I was, then and now, ignorant. But is it the only advice?

In her MFA vs. NYC essay “The Invisible Vocation,” Elif Batuman argues that the classic maxims “Write what you know” and “find your voice” are sometimes damning, convincing writers that if they don’t know some sort of spectacular, novelistic trauma or oppression, their stories aren’t worth telling. She writes, “Although there is nothing intrinsically wrong with writing about persecution, for either the persecuted or the nonpersecuted, there is a genuine problem when young people are taught to believe that they can be writers only in the presence of real or invented sociopolitical grievances.”

Is it always good advice? Doesn’t it limit our empathy? Doesn’t it steer us relentlessly back to ourselves? If we limit a story by failing to insert ourselves into other people’s circumstances, or simply leaning back and watching the world outside ourselves, aren’t we narrowing the scope of literature (and memoir) to a dangerous degree?

It means that extending the focus outward, from ourselves to our friends, neighbors, and ex-husbands, is crucial. It’s what makes Mary Karr’s books so salient. In The Liars Club, she’s the narrator, but her parents are the main characters, personalities so large and intricate that you carry them with you like old friends. Her treatment always seems fair. Her remembrances are balanced between trauma and hope, and she employs them in near-perfect, equal measure. There’s no more crying at feeling broken than there is celebration at knowing how to surf on a piece of cardboard on the muddy Texas plain.

With its importance established, how do we form a metric for writing nonfiction that respects and explores subjects other than ourselves? The very language we deploy to talk about the people in literature wrests their identities away, like writers are a gang of playground bullies. We call them “subjects,” “characters,” “personas.” It’s a process of objectification, and as Jamison puts it in her New York Times op-ed, extraction.

In a metaphor that troubled me for days, Jamison writes, “But what if this process wasn’t necessarily one of extraction? Perhaps we could imagine it as alchemy, or confrontation — like coming upon one’s own life as something glowing and mysterious in the dark. What if these alternative models suggest not strip-mining but some kind of agriculture, planting what was in order to watch the growth of what might have been?”

It all comes down to semantics. Which is fine and good, unless the subject of the missive or doting essay doesn’t see that process in quite the same way. Jamison’s metaphors only work from the perspective of the writer; the reader will interpret as they will, and our lack of control over that reaction is the very crux of this issue.

For my part, I believe in the amber of the written word. I believe that the boundaries a writer sets should hew to their own ethics, as varied as they may be, and that it’s the job of the literary community to hold its own accountable for misrepresentation. When it comes to the individuals that commonly populate memoirs — parents, siblings, those powerless to counter whatever narrative their writerly friend or family-member might disperse — there is no way to universally patrol the veracity of their portrayals. The deadbeat father who abandoned you at age five probably won’t like the way he looks in print, but should that mean the story’s never written? The awkward sex you had at sixteen might make your paramour look foolish, but if you’re just as vulnerable there on the page, isn’t it worth taking that chance, with or without their explicit approval? Good narratives change lives, and if we restrict non-fiction to the verifiable and the permitted, we lose so many potential life-changing pieces of writing.

Nothing is foolproof, but in an age where self-centeredness and that ever-present “I” bob in the wake of best-selling memoirs like a buoy, narrative non-fiction should encourage its participants to lean on the side of exploring (not exploiting) the O/other. Let’s blur the line between subject and self, at the risk of pissing off a relative and stepping outside the narrow confines of your own psyche. Mine away, you spinners of truthful tales. In the words of Kurt Vonnegut, “There’s only one rule that I know of, babies—God damn it, you’ve got to be kind.” 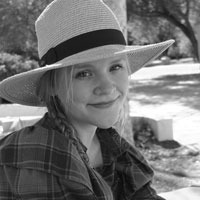 Linnie Greene is a writer in San Francisco. You can find her work in The New York Times‘ Modern Love, The Rumpus, Electric Literature, and Hobart, where her essay on Twin Peaks was a notable mention in Best American Essays 2015. She works as a Sales and Marketing Assistant at Stanford University Press.