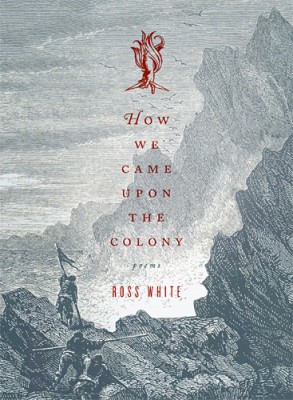 HOW WE CAME UPON THE COLONY
by Ross White
Unicorn Press, 24 pages

Ross White’s first chapbook, How We Came Upon the Colony, transports us to a strange world where the contemporary and the ancient commingle, and where nothing is ever quite what we first expect. Take “Downturn,” which opens:

What’s gone remains gone. When the Library at Alexandria
burned, scroll lit scroll. Whole languages died there.
The Colossus at Rhodes, felled by earthquake,
was eventually disassembled under the orders of the caliph,
carted off by camel, and smelted like scrap….

…It’ll take decades for the foliage
to find its way back, and what grows here on battered ground,
ground which was fused to glass in places, will wrestle
its green from gray. Meanwhile, a thousand miles away,
a distance Alexander might have marched in seventeen days
or a comet might pass in about two-and-a-half minutes,
fifty kids are sitting in a classroom, a few on the floor.
The teachers’ union says it’ll take decades to unlearn
what damage has harvested, likening the cuts to a crater.
They sound the alarm of the burning library, full of precious things.

Although at first the poem insists, “what’s gone remains gone,” we sense that this assertion is not entirely true. Though the Library at Alexandria has burned, the image (and the tragedy) of its burning resurfaces in the extreme loss of school funding. We sense that within the world of the poem, the past refuses to stay past, despite what the speaker may insist. Even the Colossus and the earthquakes push their way into the present:

The most recent Colossus fell during the tremors,
and we kept the pieces for a while, but eventually,
we couldn’t marvel at them without feeling some sorrow,
so we came with carts, so we melted those down too.

As in so many of White’s poems, this gut-punch ending forces to reevaluate everything that has come before it. Here the speaker, whose catalogue of loss began as almost-shrill complaint, has become a participant in exactly that which he has condemned. What’s gone will not stay gone: a new Colossus appears, loss repeats itself, and awareness of the pattern is not enough to stop it. Even more bitterly, this final loss is caused by the desire to escape from the pain of loss: to see the ruins of what has been destroyed is painful, so we destroy the ruins too.

White excels in such blending of reliability and unreliability, in the poignancy of bitter humor. Take “Upon Establishing the Colony, We Likened it to Paradise.” The poem begins in lush, paradisiacal description:
We found gold in the river silt,
we found beautiful iron in the ore.
The oily ink we made from turpentine,
walnut, and soot took beautifully to velum,
the velum rolled beautifully into scrolls….

…It hardly seemed overstatement
to borrow language from the Bible:
did we not have the vast array of stars
which had guided us here?
Did we not have trees that were pleasing
to the eye and good for food?

Something uneasy begins to intrude. The speaker, who had begun in praise of the bounty of nature, takes on a defensive edge: note the self-justification against implied criticism in “did we not…,” and the slight attempt at obfuscation through the use of litotes. As the poem progresses, the uneasiness builds:

But Eden, the paradise upon which
all paradise might have been conceived,
was sparsely described:
a few rivers, aromatic resins,
minerals whose plenty was dwarfed
by copper, opal, silver, and sapphire
which seemed to spring from our ground.

The speaker’s argument seems reasonable – we know little of Eden, so we must find new ways to describe the paradise before us. Yet the pride creeping into the argument—our paradise is better than Eden—is troubling, since the prideful hope to be like gods is what caused humanity’s fall and the expulsion from Eden in the first place. The trees that had been “pleasing / to the eye and good for food” now take on a sinister similarity to the Tree of Knowledge. And indeed, the colonists, too, fall from grace:

We found the few verses in Genesis wanting.
So we broke with God’s chroniclers
and began recording all that true paradise
might use to tempt a man,
and eventually we began to record
those temptations.
We took note of the bloodshed,
the salt and lime spread on the soil,
how man, like meat, inevitably spoils.

What was once paradise is now rife with violence and spoilage. The speaker recognizes this fall, of which he “took note.” And for a moment, it seems that this awareness might lead to a redemption:

I write today to ask you to burn the velum.
I have laid torch to the libraries we built.

Realizing the damage wrought by his pride, the speaker seems to wish to destroy the works that have brought and recorded the new suffering. But in another characteristic finishing twist, White pulls this hope out from under us and shows the speaker’s true motive:

The description of paradise is a trifle
before the inexorable description
of our expulsion from it.

The speaker has not destroyed his works out of remorse, but rather out of an even-more-prideful desire to reap aesthetic profit from the loss. A knife-twist ending indeed.

Even in shorter, quieter poems, White’s talent for surprise shines. Take “The Skunk,” which begins:

In the grieving house,
the hot tap water runs cold.
The mice quiet.

Immediately we enter the world of grief, in which nothing is as it should be. Hot water is cold. Though the mice grow quiet (a gesture toward the pathetic fallacy experienced by the mourners), the house is nonetheless still plagued with mice. The speaker then begins to expand into abstraction:

Dying appears sometimes as a dark man
on skis, a racing inevitability,
and sometimes as the spider Anansi.
But now, it is the skunk.

We are set up to expect the poem to explain its title, to show how Death has taken the form of a skunk. But instead, the poem concludes:

Once again, things are not as we feel they should be. Instead of explanation, instead of epiphany, we are given only the stifling smell of the house permeating everything—how true a representation of the feeling of grief. Though this ending surprises, it does so quietly: the mundane simplicity of the unexpected observation is what gives it such poignancy.

Surprising, precise, often bitterly funny, How We Came Upon the Colony shows what a chapbook can do. In only seventeen poems, White manages to build a memorable and uncanny world.

J.G. McClure is an MFA candidate at the University of California Irvine, where he teaches writing and works on Faultline. His poems and reviews have appeared or are forthcoming in various publications including Fourteen Hills, The Southern Poetry Anthology (Texas Review Press), Colorado Review, and Green Mountains Review. He is at work on his first book.