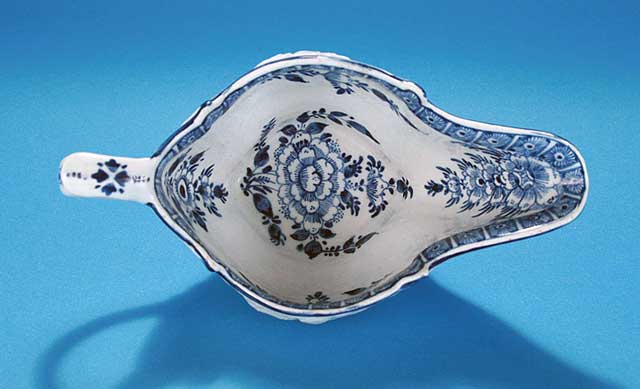 The sauceboat showed up in a bag of filthy artifacts dug up at the National Constitution Center site. To my untrained eye, it was just another dirty dish for a volunteer technician like me to wash, label, and catalogue. But judging from the buzz in the archaeology lab the day the ceramics collector visited, this piece was important, even precious.

The archaeologists believed they’d unearthed a Colonial-era treasure: an intact example of Bonnin and Morris soft-paste porcelain made by the American China Manufactory in the Southwark section of Philadelphia. Corroded and discolored, the sauceboat didn’t resemble the company’s 19 known surviving pieces (sauceboats, tiny baskets, pickle dishes, and stands) exhibited at the Philadelphia Museum of Art. Tests to determine its chemical structure were inconclusive and the underglaze blue-painted decoration was gone, but the sauceboat was the right shape and bore the right factory mark. If authentic, it was historically significant: a souvenir from the campaign to sell locally-produced ceramics to colonists, which lasted until Josiah Wedgewood flooded the market with cheap imported English porcelain in the testy years leading up to the Revolutionary War.

But history was only half of it; something else seemed to be at stake. As I inked field specimen numbers onto a seemingly endless pile of pottery sherds, the collector toured the lab. He boasted about valuable acquisitions and revealed his inexperience with mending artifacts to a team of archaeologists who routinely put together shattered vessels like a novelist fits words. His tone and swagger reminded me of an English professor who’d once told me casually—not expecting an argument—that creative work is validated by criticism. As if making meaning wasn’t the purpose of writing fiction; as if the point of archaeology was to display objects in a glass case, and not to learn about the people who used them. 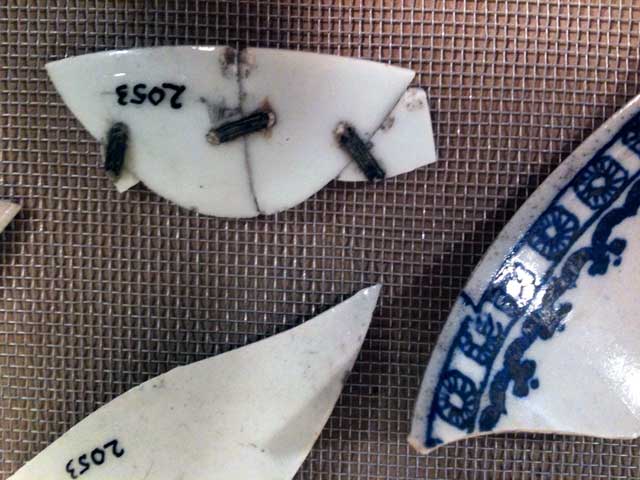 With an exasperated sigh, the collector dismissed treasure seekers who hoped against his expert appraisals that what they’d found in Grandma’s attic was worth something. “Believers,” he said. Bingo, I thought. With a word, he’d unmasked himself. Though the archaeologists might never know if the sauceboat was a true Bonnin and Morris, uncertainty wouldn’t change their work. And yet the collector had discounted these cultural stewards, who sift through our soil and process every last seed and bone and bead, who must temper the critic’s urge to curate with the creator’s habit of curiosity.  Believers, indeed: artists and archaeologists will spend our lives searching because the process of searching is valuable.

Like any object, the sauceboat means something different to every person who encounters it. For the collector, the thing itself is valuable, both for its scarcity and its arcanum, the trade-secret recipe for turning coarse elements such as glass and bone and soapstone into fine porcelain. For the archaeologists, the object’s importance is partly its provenience, which provides an important context clue. British-born Gousse Bonnin and Philadelphian George Anthony Morris were in business for only two years; the manufacturers’ narrow production window (1770-1772) helps date other artifacts found in the same strata, on a timeline moving backwards from the contemporary surface to the deep past.

For me, the object conjures Thanksgiving—not my elegant adult remake of the holiday, but the dismal childhood version: my family awkward in dress-up clothing, arguing and blasting aerosol cheese onto Ritz crackers while a turkey roasts interminably, filling the house with the sad smell of sage. My family of origin is my personal arcanum, an alchemy of resentment and grief that rendered me smooth and brittle. Memories are my material; writing is the way I keep myself from shattering. 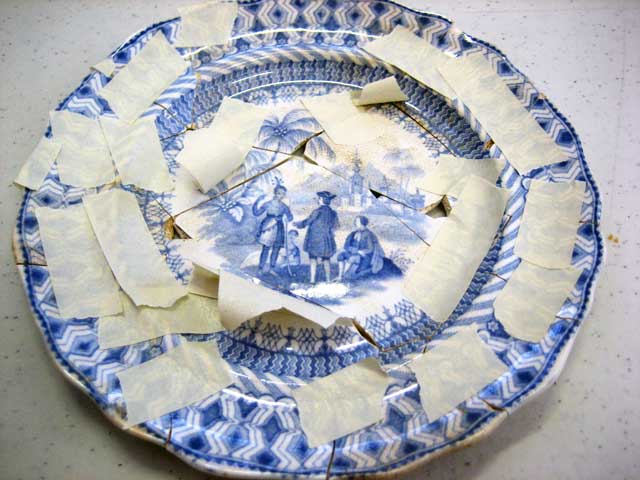 My point is that we value objects (or not) according to the personal meaning that we bestow. Perhaps it’s sacrilegious to say it, but in the months since the sauceboat’s discovery, I’ve often wondered if the pristine Bonnin and Morris pickle stand on exhibit at the art museum escaped the privy pit not because it was treasured, but because it is absurd. In life as in memory, what we don’t use is preserved intact. But the archaeological record is often created in crisis, with emotion guiding what we take with us and what we leave behind.

I speak from some experience. In six years, I’ve had to empty four houses full of objects collected by declining parents and departed parents-in-law—and though Thanksgiving dinner china was abundantly represented, it never once made any sibling’s must-have list. I gave away fancy serving pieces to the Goodwill in my hometown; I donated dishes, flatware, and pots and pans to the Nationalities Service Center, to help furnish the homes of refugees recently arrived in Philadelphia from all over the world.  For myself, I claimed items with personal value: my mother’s measuring spoons, the wooden doll cradle my father made for me, my mother-in-law’s trove of craft supplies. These small, forgotten things are like the fingerprints potters leave in the clay: evidence of the maker in what lost family members finished or hoped to finish one day.

When my beloved mother-in-law died, the apartment seemed even quieter with the noise of unstrung beads clicking together in drawers, and fat spools of colorful quilting thread rolling from side to side in wooden trays. There were boxes and boxes of fabric still scented with her drugstore perfume and permeated with the sadness of things left undone. Overwhelmed, I emailed my friend Marta Maretich in London, who quilts as brilliantly as she writes. I knew that Marta—whose own fabric stash she describes as “the size of a large, well-fed sow, packed in a plaid plastic bag with handles, the kind you see on the news in Asian refugee situations”—would know what to do. 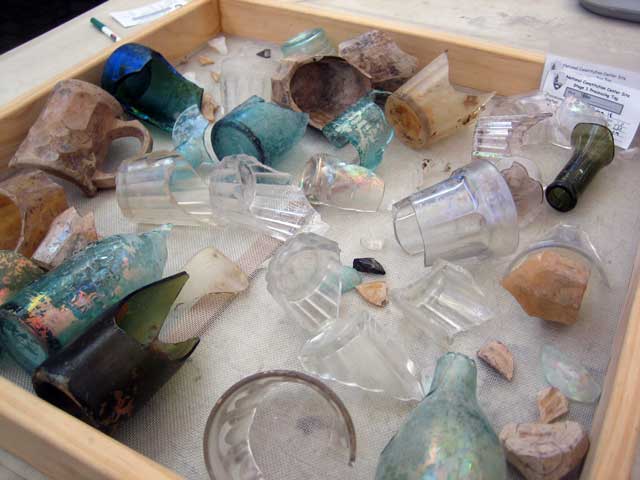 “What would I keep?” she responded, in a message I read in the wee hours with relief and gratitude. “This is the practical me talking: all pure cottons, all solids, even dull, muddy ones because they make a useful contrast with brights. Anything geometric, anything really vintage. Anything seasonal, because even when you don’t think you’ll ever use a poinsettia print, you find yourself needing one. Orange fabrics are oddly useful in many situations, not least at Halloween. Scraps from things she made for you, because you will use them in your own projects and think of her. Fabrics that remind you of her for any reason whatsoever. Green fabrics, because you love green—there should be plenty in the stash, because undoubtedly she knew you loved green, too.”

It was exactly what I needed to hear to get through the heartbreak of breaking ground. As I worked my way through the fabric, I mourned my mother-in-law, but I felt hope, too. The heirloom quilt I plan to piece together from her remnants will be a rare accomplishment given my meager sewing skills. It won’t be anything a collector would want, but it will comfort my daughters in incalculable ways long after I am gone.