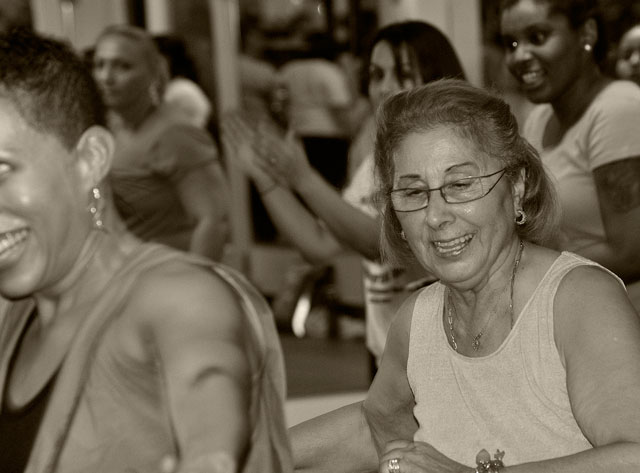 Saturday at Zumba there was a new song, one with a thumping electronic beat. Marie hated when there were new songs. She still had difficulty learning the routines they did every week, mastering such simple moves as simultaneously throwing her right arm in the air and kicking her left foot up. The instructor, Sierra, bopped around at the front of the room, clapping her hands together.

Marie could feel sweat sticking to her back underneath the big white t-shirt and loose black capris she wore. She’d found them on sale at Marshall’s, next to the racks of bright athletic clothing and spandex. Lenny had bought her a gym membership, insisting she stay active. She’d protested, but he used his trump card, said, “I want my kids to know their grandma for a long time, Ma,” and she gave in.

Now she watched the young girls dancing in their sleek running shorts and wished it were possible for her to feel less unappealing. She imagined them whispering about her, the fossil in the back row wearing all the clothing. Three rows of girls in front of her, and no one wore capris. But they were tan and toned, and she’d surrendered her legs to cellulite years ago. She eyed Sierra’s pink spandex tank top with envy.

“Get into it, ladies!” called Sierra, pushing her butt from side to side. “Let’s see those booties pump!”

Marie thought she might fall over, but she kept going, heaving breaths and trying to move her rear around. Sierra suddenly dropped to the floor to do push-ups. The rest of the room promptly dropped as well, with the precision of a neon spandex-encased pony-tailed army. Marie’s jaw nearly dropped. The room was chanting “one, two!” as they did push-ups. Marie tried to kneel to the ground and get in push-up position. She slowly started bending down.

“If you can’t drop to the floor just yet, don’t worry! You can stay on your feet, just keep bouncing from side to side!” called Sierra.

Marie looked around. She was the only person still standing in the room. A girl who looked like she was still in college smiled at her encouragingly and Marie suddenly felt the urge to slap her.

She wanted to slap all these young women, slap their youth and beauty right out of them. It wasn’t fair.

After Lenny was born, when he was old enough that she felt safe leaving him with a baby-sitter, she’d taken a Latin partner dance class at the local community center as a way of getting back in shape. She cajoled Tim into coming with her, and they laughed as they fumbled through the mambo and tried to salsa, chanting “quick quick, slow” with the instructor and stepping on each other’s feet. “Woman, you want to make me dance?” he exclaimed when she first brought up the class. “You can stay fat. You look good to me,” he said, winking, and she cracked up.

She felt an ache in her chest, thinking of Tim. When Lenny had taken her to this gym and given her a tour, she’d asked about a Latin dance class and been given a shiny Zumba brochure. She tried to “quick quick, slow” her way through the routines, but it didn’t work. The new rhythms weren’t the same.

Sierra leapt back to her feet and clapped her hands. “All right, ladies! Zumba fever!”

When class was over, she grabbed her towel and left, not bothering to listen to Sierra’s announcement about following her on Facebook and Instagram. Lenny was waiting for her outside, in the car.

“It was awful,” Marie was about to say, like she did every week. But she looked at Lenny, whose hair was starting to recede like Tim’s had and whose smile looked strained.

“It was fine, honey,” she said, looking out the window. Quick quick, slow. 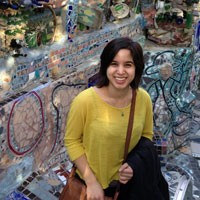 Nadia Laher is a senior at the University of Pennsylvania, where she studies political science and creative writing. Her work has received the 34th Street Magazine Annual Fiction Contest first prize and the Gibson Peacock Creative Nonfiction Contest second prize, and has appeared in Stamped Magazine. She grew up in northern Virginia.