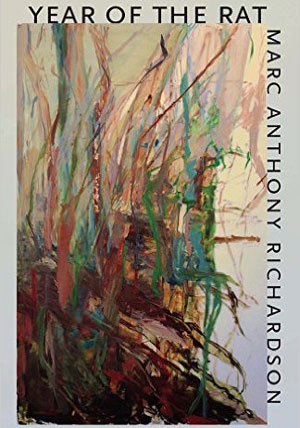 Marc Anthony Richardson is an artist from Philadelphia and this compact book, his first, which won the Ronald Sukenick Prize for Innovation Fiction, makes for a fine addition to the recent history of experimental prose by writers with ties to Philadelphia—from the late Fran Ross (whose 1974 novel, Oreo, was recently re-issued) to contemporaries like Samuel R. Delany, Sabrina Vourvoulias, Hilary Plum, Caren Beilin, and the West Philadelphia sci-fi collective Metropolarity.

An acute sense of the lethal and vital forces surrounding us seems to infuse the tremendous range of sentences colliding across the novel’s pages. Focused on the body and the anguish of grief, its style has shades of early Henry Miller and Lawrence Durrell, Sartre’s Nausea, and Ralph Ellison’s Invisible Man.

The novel’s unnamed narrator is a thirty-five-year-old black artist, a hard-drinking academic and talented, avant garde illustrator disillusioned with his future prospects. Having quit the art academy and now living in Oakland (“the cradle of the Panther,” he calls it, referring to the birthplace of the Black Panther Party), his mother’s poor health draws him back to Philadelphia to care for her at home.

She has suffered a life of physical and emotional trauma, and his love for her is the novel’s emotional core. They are close, to a point that stretches plausibility: early in the book he draws her nude. He’s intimidated by her openness at first. “You hobbled in, wheezing and wearing a slightly knee-back-pained look on the face and a holey nightgown,” he recalls, “the right tit hanging half-out, brown, half-covered with yellow lace as if a giant imperial moth had emerged: you would do anything for your sons and for an artist this shamelessness is an asset, yet for a son it’s an excruciation.”

Studying his mother, intimately aware of how she got each large and small scar, he begins to see not only her life, but the shape of his own, his siblings’, and father’s: “(During) these series of croquis, while hearing what your figureless form has to say, the fear grows thinner and thinner and bit-by-bit your body begins to imbue my own. I will begin to receive, I believe, a slow sense of instruction.” She’s very ill, deep in poverty, and he knows time will soon leave her “cast down by stroke or fall or diabetic coma and left helpless in the hell of my heart.” Facing her death to come, he says, “(I) will feel you I will ache you I will cry you…when your lips are closest to mine, asking for that final favor that release, I can’t say what I would do: my conscience is a sentence.”

In creating “the maternal nude,” he describes his illustrative method: “Stop before perfection. Walk away. For although most realists—imaginary beings obsessed with literalisms for lack of imagination—will commonly agree that the drawing has turned out to be an incongruous mess…it can surface some interesting results, some intersecting symbols.” Disdaining realism, with faith in the results of incongruous elements, this could partially describe Richardson’s technique for the book. The plot and sub-plots are so smudged into the text it’s often tough to tell what’s going on. Chapters swell with old and recent memories, bits of philosophy, sex scenes with men and women, demeaning jobs he’s taken as an artist. 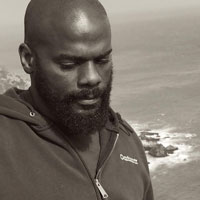 What arises is the intense, abstract sum of visions contained in a black man’s experience amid the chaos of self, undone by the death and imprisonment of loved ones, in an impoverished city he has little reason to love, but cannot help but return to. “Ghettoes and slums are not the same: if everyone is ethnically alike they are ghettoes, if everyone is just basically poor they are slums; we are a ghetto in a slum, you and I,” he says while caring for his mother. Seeing her squalor is painful, and in recalling his days teaching kids art in public school, he lashes out at the monstrous indifference that spawns widespread suffering. “Native Son’s Bigger, Frankenstein’s fiend, on these classical creations, on these wretched visions I mull over whenever I see one of these children of spleen thrust away by foot at birth and abandoned in the shitholes of someone else’s doing, for coupled with their atavistic fears one can almost see into the biological cereal bowls of their bodies, aswarm with hyper-activities and attention-deficiencies.”

The chapters have titles such as “Oceanus Procellarum” and “Mare Frigoris”—names of moon craters, or mares, Latin for seas, from the days when astronomers mistook them for lunar seabeds. Richardson also includes brief academic footnotes when quoting various authors. These nod to the narrator’s academic background, adding a hint of celestial aura around the beauty and violence of our universe, and some factual literary touchstones to the stormy, personal narrative.

The artist listens to tapes of his mother telling their family’s history, which leads to memories of his father, who was abusive. “They’re shouting. He’s ripping into her. He’s crisscrossing her with whore whore whore and she is crying and calling and fighting for me to get out to get out to get the hell out and dart for the door, which I do with her hotly behind—yet as we’re falling down the staircase, breaking plaques, he can barely stand by the bedroom door, crying with an erection and reduced to his domain.”

As literature of grief, the book is strongest when grounded in scenes with the artist’s mother, weakest when he armors up with machismo, ranting about society or his male rival at the academy or trying to win an argument about religion with his brother. He admits he’s at an “interregnum”—recalling fights and funerals, visiting his brother in jail—and feels the whole world may be, too. With only the idea of maybe going back to school, surrounded by so much death, he’s on the verge of becoming a middle-aged male cliché, “I am still this thirty-five-year-old man in his newly bought bed with his feet hanging from the edge, drinking on a mattress with his belly bloated, and who is chafing now against his sheets, embracing two pillows as a patient would his pills.” At this crossroads, he navel-gazes, wondering, “For if we die with our illusions, do we become ghosts?” and “O where is the now? where is the now? I sound like a man in a maze.”

Amid the scenes of death, empathy, abortion, confusion, the talk of sex and prison and grief and disease, the style is favored heavily over character development and structural tension. At times the characters don’t seem truly at risk of feeling all that deeply, or being hurt. This is because the focus is on the artist as he looks steadily backwards. Conveyed in such a rigorous, inventive, abstract manner, the past events offer little surprise, or sense of discovery for the narrator. The conclusion is quite beautiful, after so many frenetic passages and cuts back and forth in time, as a minor motif returns, and Richardson offers an unforgettable and startling refrain of farewell as the artist and his mother are brought close together one last time. Yet the landscape we’ve traversed together to reach this point has become so stylized that it almost feels like a safe, static place, one where the artist doesn’t seem ready to go deeper, beyond the pain of memory, until the very end.

Matthew Jakubowski has written about experimental fiction for The Paris Review Daily, Interfictions, Kirkus Reviews, Music and Literature, gorse, 3:AM Magazine, and more. His short stories are forthcoming from The Brooklyn Rail and Great Jones Street. He lives in West Philadelphia and can be found online @matt_jakubowski.