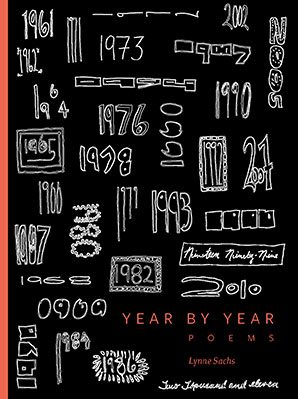 When Lynne Sachs turned fifty, she asked herself one simple question: How have the private, most intimate moments of her life been affected by the public world beyond? The poems she wrote in response turned into this book. One poem for each year.

Sachs is a well-known experimental filmmaker. Year by Year is her first book of poetry, and in many ways it can be appreciated as the logical extension of her career as a visual storyteller. She describes her films as combining “memoir with experimental, documentary, and fictional modes.” Such a description might also be applied to her poems. Year by Year dips into memoir when it recounts events in her personal life. The glimpses into current events have a documentary feel. When Sachs describes moments she was present for but cannot possibly remember, such as her own birth, the book takes us into fictional territory. The hybrid form (memoir/documentary/fiction) is one experimental element. But even more innovative is the way she often presents us with two versions of the same poem. The handwritten draft and the final typeset poem face each other, resembling a book of poems in translation where the original and translated versions run in parallel.

I first read Year by Year in two sittings, focusing only the final versions of the poems. It is unusual for me to consider a poetry collection a page turner, but this book was. It propelled me through time from the poet’s birth to the birth of her daughters and beyond, from the Civil Rights Movement to the Iraq War.

On my second read, I scrutinized the handwritten drafts alongside the final versions, one poem at a time, letting them resonate individually. The experience was fascinating not only because it showed what choices the poet made to tighten each poem, but also because reading the two versions side by side created a not-quite-synched stereo effect, or perhaps something close to a superimposed image in a film.

In “1962,” for example, the final version reads: “Two baby girls brown and blonde/at home with mom and a nurse.” The draft version is less distilled, but it has its own appeal: “A plan, an American plan, two eggs any style, not the Continental breakfast, baby girls blonde and brown at home with mom and a nurse, a black woman whose name no one remembers.” In particular, the fact that no one remembers the nurse’s name, in Memphis, Tennessee in the 1960s, sets the stage for the Civil Rights events that will happen in the later poems.

In “1966,” “fields of daddodils that never drooped” becomes “Droopless daddodils.” The conversational tone shifts to a pared-down diction that sounds more childlike and more artful at the same time. 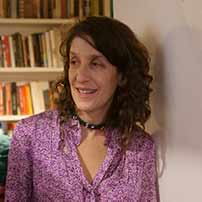 The draft version of “1978” includes “Our Bodies, Ourselves,” which the final version simply calls, “a feminist book on the body/I wish I loved.” The line breaks allow us to read the sentence as a whole and as a fragment, at the same time. We infer that the narrator wished she loved the book, but also that she wished she loved the body, the female body, her own body, enough to be comfortable learning more about its sexual functions. Having the name of the book on the facing page adds to the emotional impact, because so many of us know that book well, a cultural touchpoint that reminds us of how uncomfortable it can be to attempt to claim our bodies as our own.

The first poem in the book sets the tone by introducing the concept of time—the time of day, the time of year, the time of life of the poet’s parents when they became her parents: “Born at dinner time on an August evening,/the child of a twenty-one and twenty-three-year-old” are the opening lines. The use of time adds to the cinematic quality of the poem, grounding us in an “opening shot,” instead of the abstract or fuzzy entrance to a poem that a reader might expect. .

The poem “1964” immerses us in a scene that shifts from close up to zoom, from a little girl’s room to the vast night sky. We see the magical thinking of a young child, who might believe she can reach the stars or that she can change her parents’ behavior. The poem suggests the lack of control children have in their lives and the way they cope by refocusing their attention outward. As Sachs puts it, “My mother and father are fighting on the other side of the door./I lick the window next to my bed and pretend to taste the stars.”

It is not surprising that a poetry book by a filmmaker is lush with images. Even something as visually static as a phone call becomes vivid and tangible in “1982,” when the narrator is making a transatlantic call to her brother: “His hello transforms this dirty glass box/into four dynamic movie screens.” The poem then offers us glimpses of what the narrator imagines she sees on those screens, the events she is missing by being far from home. The poems also sometimes convey abstract concepts as physical objects, such as in “1961” where the future is a crystal ball that the newborn drops from her hands. It shatters and scatters “down the hall/out the front door of the hospital/into the sweltering darkness.” The “camera” zooms in to the tiniest of hands and then pans out to the room, the building, the outdoors. We can imagine two different “cameras” filming at the same time at vastly different scales.

Natural beauty and headline-making violence appear in the same stanza, showing, with that juxtaposition, that we cannot escape from the world around us. In “1999,” for example, “In our front yard now, Columbine grows wild./With each bloom, I think of her, a mother too.” The narrator cannot even look at her Columbine flowers without thinking of the Columbine school shooter. Again, Sachs uses something visual and concrete to pan over to the homophones they might prompt in a reader and writer alike.

Similarly, in “2004,” the narrator’s daughter’s first solo ride on the subway is made to coexist  with explosions in the Madrid metro by terrorists. The public and the private collide in its own kind of explosion on the page in a visual way.

The book ends with the fifty-year-old narrator looking back over her life—another visual reference. The scene is her birthday party, where she “perform[s]/split-second happiness for the camera.” The last stanza reads:

I catch my reflection in the bathroom mirror
take another look at my own silent film
and listen once again to the soundtrack
I’m playing over and over.

This scene can be interpreted literally as the narrator watching a film she made. But the “film” is also a metaphor for her life, her private and public memories, and, by extension, this book. The last line is “I’m playing over and over.” As an artist, Sachs keeps playing, again and again, with each of the thirty-three films she has made over the decades and now, with her first book of poems, which are just as inventive and fresh, just as delightfully playful with form. These poems are innovative but never intimidating or deliberately opaque. Instead, they invite us in, encouraging us to play along. They give us a structure to enter into our own retrospective lives, our own distillations of time, our own superimpositions of the newsworthy world onto our most intimate moments. 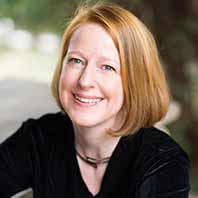 Sharon Harrigan is the author of the novel Half (University of Wisconsin Press, June 2020) the memoir Playing with Dynamite (Truman State University Press, 2017). She has published more than fifty stories, essays, and reviews in the New York Times (Modern Love), Virginia Quarterly Review, and elsewhere. Her awards include: finalist, Association of Writers and Writing Programs Award for the Novel; International Book Award, first place in memoir, second place in new nonfiction; May Sarton Book Award finalist; Kinder award for best short story from Pleiades; Cecilia Joyce Johnson Award from Key West Literary Seminar; Sarah Pennypacker Fellowship from the Virginia Center for the Creative Arts; and Ted Berrigan Award from Naropa University. She teaches writing at WriterHouse, a literary center in Charlottesville, Virginia.