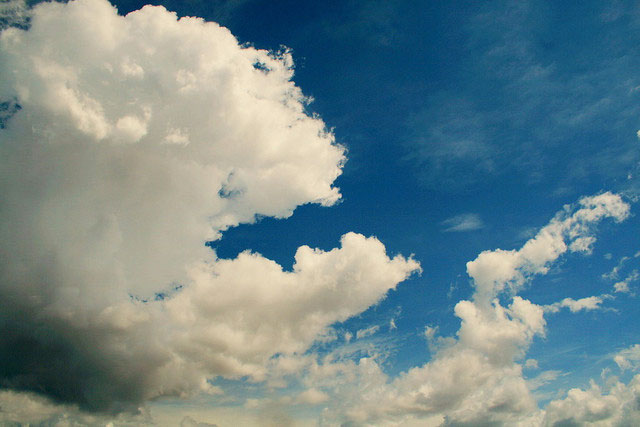 WHAT THE CLOUDS BRING
by Chila Woychik

Five years ago, the eastern part of this state was submerged—a Midwestern Katrina. Waters from a snowy winter mixed with an especially rainy spring and ran down our rivers, the Mississippi, the Iowa, the Cedar, and others. The soil was saturated and the river banks gave way under the weight of the deluge. Some built arks. We were safe, standing at the peak of Mount Ararat with a pair of binoculars, watching the flood waters rise and raze crops, cities, continents.

The breadth of anxiety from such experiences is not to be understated. To illustrate, when the unsinkable Titanic sank, among the seven hundred or so survivors was stewardess Annie Robinson, forty years old at the time with a grown daughter. Annie returned home from the Titanic disaster to—believe it or not—take a position aboard yet another ship, the Lapland. (Some well-meaning idiot probably told Annie, “Get back up on that horse or you’ll be forever afraid of riding.”)

Two years later she took a short trip aboard the Devonian to visit her daughter in Boston but it happened to be foggy at sea that day. The captain blew the ship’s whistle again and again as a warning because this is what captains do, and Annie, likely reliving those horrible moments on the Titanic, jumped overboard, not to waiting lifeboats and helpful crew assisting rescue efforts but to the bowels of the cold Atlantic where awakened out of her painful reverie she may have called out in vain to be brought back to safety. Annie Robinson: “‘presumed drowned’ between 42º35N 67º15W and 42º25N 69º30W.” Her bones still lie entombed off the eastern seaboard. R.I.P.

Rain is forecast to some degree for the next week. Neighbors’ hay is high but cannot be cut. Some have tried. Most have failed.

The grass and alfalfa won’t dry when the nights are cool, like now, and if baled while damp are in danger of composting and smoldering, flaming up. Barns have been destroyed this way; we’ve seen smoking bales in the middle of pastures. Horses have gotten sick and died because of moldy fodder. Hay must be dry to bale and the rain must stop before the grasses can be cut. And once again we learn that nature cannot be controlled, only attended upon.

A dragon glides across the midday sky, its tail straight, unspiked. Several smaller dragons follow and a very large one lags behind. Humbaba has favored Iowa! The first dragon soon converges with the universe and is no more, the smaller ones meld to white, and the large one breaks in three, to propagate the fantasy, no doubt. They storm across this scenescape, this muted Xanadu of celestial pleasures. Dragon clouds are not for the faint of imagination.

According to legend, dragons, sea monsters, have troubled ships for centuries. Stories are told of sightings and sinkings from centuries back. The idea of dragons is a perpetual one, pre-dating paper. See a dragon, scratch it on a cave wall. Watch it traverse the sky in clouds of glory.

Sweat bees are annoying little creatures that especially enjoy damp overcast days and exposed body parts. One lights on my knee and flicks its tail. They land and linger, land and linger, then at the slightest movement from the host, strike. The result is a small raised papule which turns into a mosquito-bite-like itchy painful reddening. I feel no mercy and do the unthinkable: swat, flick, smile.

The near-constant rain fills the reservoirs emptied by drought two summers ago. Rivers are rising again; I dust off the binoculars’ lenses. The lush valley below is green and grown and overgrown. Where go the boats? Wild multiflora rosebushes glob the hillside with dark patches, and too-mature grasses head out in brown. Yellow dock, Canadian thistles’ purple flowers, and white clover rainbow this verdancy.

I decide to make a trip for coffee, and the rain begins again. It’s a hard, driving rain where the clouds skip along the earth, blown by wind and furious. The foot-high stalks of corn flail about like so much spaghetti in boiling water, and I give a nod to Providence for the depth of trees’ roots, holding them down, when letting them fly in weather like this would be much more picturesque.

The world is covered in mist and flow. Bugs and dirt and ease wash to land, down, down, to land. The rain is like a million pebbles on my windshield, the wipers a team of woodcutters chopping in sync, whack, whack, whack, whack. A moderate-sized tree branch stretches halfway across the road so I swerve, but this is not unusual. Often it’s drifting snow or road kill or even an occasional darting pocket gopher, squirrel, or mob of deer which keeps us on our toes here at the juncture of Nowhere and Some Place.

The deciduous trees sway at their tops. The evergreens and the dead, leafless ones stand erect, immoveable, it seems. The higher grasses have been subdued by it all, and have lain down in their green pastures. This is called wind damage, but some of it will recover when the sun finally reappears and the living once again stretches toward the light.

Clouds bring good, and some joy, but also the occasional dragon, a sinking or two, or worse. So what do we do? We swat, flick, and smile. We get back up on that horse and ride it out, for this is all we know, and most of the time it serves us well enough, in Iowa. 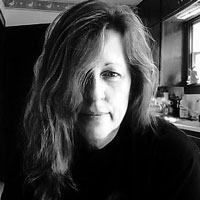 Chila Woychik lives in Iowa with her husband, several head of sheep, and chickens that lay green eggs. When not working the homestead, she edits at a small literary press, Port Yonder. Her latest published pieces appeared in or are forthcoming in The Mayo Review, The Milo Review, Prick of the Spindle, and others. Her website is www.chilawoychik.com.