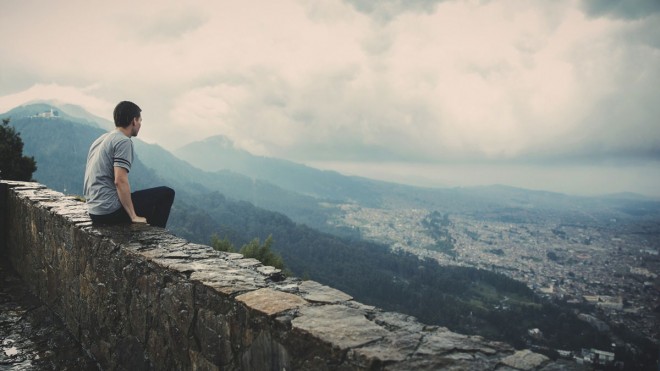 THE MAN ON THE COUCH AND THE MAN WHO SPEAKS POEMS
by J.G. McClure

I pay a therapist an hourly rate to listen to my feelings. I pay literary journals reading fees to read about my feelings. My therapist says she’s struck by two parallel versions of me: the Man on the Couch who seems pathologically unable to feel, and the Man Who Speaks the Poems who feels all too deeply. She wonders which is real, or are they both?

One of me finds a parallel in art to go with this question from life. In his classic short piece “Borges and I,” Jorge Luis Borges talks about two versions of himself, whom I’ll call Borges the Famous Author (who wins awards and has deep thoughts) and Borges the Guy Drinking Coffee (who reads with befuddlement about the exploits of Borges the Famous Author). Borges the Guy Drinking Coffee enjoys the prose of Stevenson—a wry allusion to Dr. Jekyll and Mr. Hyde, a little joke which tries to establish the separation between art and life by using an example from art beloved by the Borges from life. The lines become hopelessly blurred, and in the end Borges can’t decide which Borges is the Borges writing “Borges and I.” (Idea for a terrible poem: “Borges and I and I and I.”)

I loved a woman named Ariel, who told me I was too sad to live with. She wasn’t wrong. She told me too that I didn’t appreciate her, and again she was right—I was glad for the breakup, because she didn’t fill the yawning emptiness in me and now I was free to chase the abstract possibility of someone who might. But upon losing her, I began writing poems about the loss, and suddenly it became real to me. Holy shit! I thought, I love her after all! Bummer.

But I have to wonder whether I actually love her, or if I love the Idea of Her, or even The Idea of Having Lost Her. After all, a poem always treats the idea of its subject, never the subject itself. You know the argument: signifiers beget signifiers, never reaching a signified. When I write about chipmunks, furry creatures don’t pop into being; when I write about Ariel, she doesn’t feel it.

If I’m writing only about the Idea of Ariel, does the Man on the Couch actually have an emotion, or is it just another one of the Man Who Speaks the Poems’ beloved abstractions? Has art let me in on a truth of life, or is it just re-inscribing the same pattern of abstract desire that led to the loss in the first place? In attempting to answer this question, I end up at Thomas Hardy’s “The Self Unseeing”:

Here is the ancient floor,
Footworn and hollowed and thin,
Here was the former door
Where the dead feet walked in.

She sat here in her chair,
Smiling into the fire;
He who played stood there,
Bowing it higher and higher.

Childlike, I danced in a dream;
Blessings emblazoned that day;
Everything glowed with a gleam;
Yet we were looking away!

The opening line establishes the three-beat rhythm that will carry throughout the poem, and sets up a kind of certainty: here is the floor. But in the next line, as the poet attempts to really see the floor, the verse accelerates: the beat pattern allows only so much time spent looking at the floor, and the syllables are crammed together to squeeze the observation into that space. Art foreshortens life.

The next couplet enacts the same drama: here is the door (okay) and (uh oh, wobbly meter!) it’s where the dead feet walked in. At the level of form, we see the act of observing and memorializing undermine itself. The poem is an act of remembrance, and in some way it seems to make the past exist: here is the ancient floor, right here! Yet despite all that, the feet remain dead.

As the poem enters the final stanza, the tempo doubles. Up until this point, we’ve had two lines per clause, then a semicolon, then another two line clause. (The first stanza uses, oddly, a comma instead of a semicolon, but the pacing is the same). But by the final stanza, every line is stopped: we get only one line per clause—time is accelerating, the past is slipping away, the form of the art enacts the very loss it tries/fails to prevent. The poem serves at once as a bulwark against loss and the loss itself; it at once laments the inability to hold on to a fleeting moment of life and enacts that inability. The inability to hold onto the moment is, on some level, caused by the accelerating form of the verse: art gives and takes life at once—it ransacks its own temple.

What does all this mean? I’m not sure. Perhaps it means simply that I can’t make sense of life without art, can’t parse the concrete without the abstract. But that approach carries its own risks. I wrote this poem some time ago, about The Man on the Couch’s first girlfriend and his failures in life due to naïve readings of art:

If Petrarch told the story, I would gaze on her from afar
and at once her countenance would turn icy fire;

my heart would wither, and writhing
in courtly shame I’d know I loved her.

If I were Dante she’d be an angel and through
the span of three epics we’d reunite in glory,

and if I were Keats I’d have tuberculosis
and would be more interested in nightingales.

In fact, I was interested in her, my first girlfriend’s friend—
at least that night I thought I was, though now I suspect

already supposed to be in love with,
because such longing seemed like

a very poetical kind of longing, and I
was nineteen, an age when it seemed vital

unless I worked for it with great care. The next day,
wading through the soupy clarity of my hangover,

I thought that if I were Bécquer I’d reject all mortal lovers
and pine instead for an imaginary friend,

a phantom of mist and light who would proclaim
“I cannot love you!” making me swoon many

picturesque swoons. What I should have thought
was if my Laura/Beatrice/Phantom told the story

she wouldn’t be my anything; the story would be
how her friend’s drunk boyfriend spilled the wine

and slurred some come-on featuring a bit of Shakespeare.
Or I should have thought that if my girlfriend told it

the story would be what a dick I could be
and how she deserved better, and she’d be right,

but that wasn’t my story either. I’m not convinced, now,
I had a story—more a rough collage of cut-outs

from the Great Dead, held together by
gluestick and insecurity, festooned with

glittery narcissism. But that morning Bécquer—
his sonnet, his stupid and heartbreaking thirst for the Ideal—

moved me greatly. I knew enough to know
I was alone, and to convince (only) myself that

to be lonely was a gift: the gift of sadness and
a story: my story, the story of me and me alone.

Bad art, or bad reading of good art, can affect others’ lives as well as one’s own, re-inscribing damaging ideologies. For further evidence, let’s stick with Joyce for a moment: take “A Painful Case,” in which the protagonist’s abstract and stubborn belief in the incurable loneliness of the soul leads him to hurtfully reject the one person who could love him, because her expression of love feels tawdry in light of his philosophy/aesthetic. But this is just an emotional reaction to an ideological problem: to accept her expression of affection would mean to accept that we are not incurably alone, and this the protagonist cannot bear. He’s too right to be happy.

Yet I still believe in the necessity of art, of Ideas. Something in the act of making art makes the stuff of life real: the Man on the Couch feels nothing, but the Man Who Speaks the Poems feels all too much, and some of that must bleed back into the Man on the Couch. Art distorts life, art damages life, but art also reifies life.

If we are broken, if our lives don’t feel real unless they’re abstracted through the lens of art, then the crucial thing is to make sure it’s a good lens. We ask art to make our hollow lives full, and in doing so, we ask of art more than it can possibly provide. But art—stupid, heroic, wonderful art—at least attempts to make for us a bearable world.