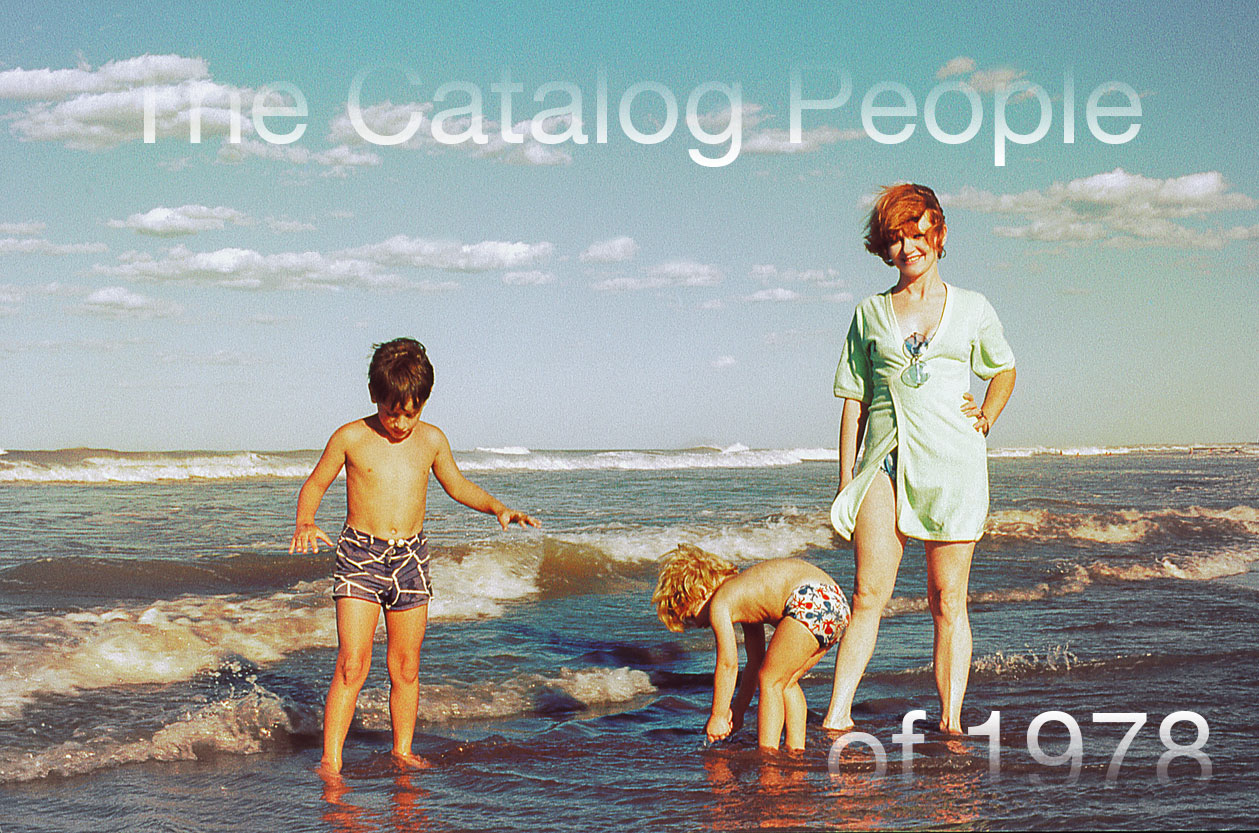 THE CATALOG PEOPLE OF 1978
by Joshua Jones

It is August when her boyfriend, the pornographer, takes her to the beach with her two boys, one pale like her, the other dark. They bring beer and bologna sandwiches in a crinkled grocery bag, lay stolen motel towels out across the sand. The boys dart off into the surf, shrieking, laughing, ignoring the Pacific chill.

She lies face-up on her towel, a slight, yellowed rectangle. She wears a bleached sarong to cover the bruises on her thighs and her one-piece, the white one that matches her oversized sunglasses. They completely cover her eyes. Her youngest son says she looks glamorous, but he’s only nine and knows nothing.

Up the beach, another family has unfolded chairs and planted an umbrella. They spread out towels—large, striped rectangles, the kind advertised in that year’s Bullocks Wilshire catalog. There are two children: a small boy and a baby girl. The children’s hair is uniformly blond. The parents both wear wedding bands.

They sit upright, this catalog family, helping their daughter sift sand while their son wanders away carrying a candy-bright shovel in one hand, a matching bucket in the other. He wades into the ocean and out again, then settles onto a gray slab of beach halfway between the two families, near where the two brothers play. The dark brother squats beside this catalog boy and thrusts his hand into the coarse sand, carving out a moat, then walls, a malformed tower. The pale brother stands above them both. His shadow hovers atop the sandcastle.

From their antipodes, the adults watch on—the catalog parents in the shade of their catalog umbrella and she on her back, pretending to sleep. Her boyfriend strips off his shirt and sits beside her, back hunched, his burgeoning belly sagging over his swim trunks. His is a sparrow chest, an undignified frame.

The pale son’s chest is broad and athletic, wound tight in a coiled exergy. Beneath his shadow the younger boys’ castle gains another tower, this one with finger-width crenellations. The waves crash louder and louder. It’s almost high tide.

Her dark son nudges the catalog boy and points at her, and the newfound friend follows the gesture, stands and shields his eyes. She doesn’t move, hopes they think she’s sleeping. Her son is still pointing when his older brother shoves him down—into the sand, into the sandcastle—and strikes him over and over with his pale fists. It only lasts a moment. The wind and surf bury all sounds of violence.

Now her boyfriend is up, bounding across the sand, peeling the brothers apart. They crumple beneath him like seventy-weight paper.

The catalog boy watches in silence. His parents shout and wave. Come away from there, they say with their flapping arms, their panicked mouths. But his eyes flit from the boyfriend to the brothers to the broken castle, its walls now slumped into the shallow moat. He looks as if he might bawl. He has his parents’ sissy looks.

The dark brother wipes a sting of blood from his nose and returns to the water. He’s no crybaby. His older brother sits in the sand. He’s folded up amid the castle ruins, small again, brooding again, not even watching as the catalog boy retreats to his family, to their American blondness, to their designer towels and matching umbrella, now closed, now being carried away.

Her boyfriend returns to his motel towel and says, “I don’t get that kid of yours. Goes nuts on his brother just because he tells that little boy that you’re a movie star. The kid’s a basket case.”

“Don’t talk about him like that,” she says. Her words swallowed by the ocean. She dares not speak louder.

The pale brother wipes an arm across his eyes, still tear-streaked from getting slapped. He glowers down the beach, not at her boyfriend, but at her, his gaze so intense and knowing that she has to turn away. Beyond him, the catalog family crests the grass-strewn dunes, then disappears on the other side. 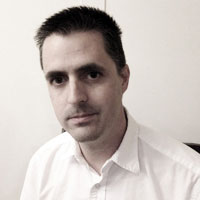 Joshua Jones is a writer and animator residing in Maryland. His writing has appeared or is forthcoming in Necessary Fiction, The Tishman Review, Juked, and others. Find him on Twitter @jnjoneswriter.