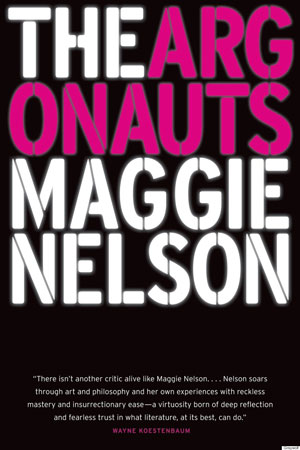 reviewed by Gabriel Chazan
Sometimes an idea reverberates and echoes for a long time, like a song. This was my experience reading Maggie Nelson’s revelatory new memoir, The Argonauts, which starts with an idea Nelson found reading Wittgenstein: “the inexpressible is contained—inexpressibly!—in the expressed…” She goes on to describe that its paradox is, quite literally, why I write, or how I feel able to keep writing.” Nelson wrote the book while she was with her partner, the non-binary trans artist Harry Dodge, and pregnant with their first child. At one level, The Argonauts recounts her experiences as a writer in a relationship with Dodge, whose gender identity consciously resists the traps of language. In attempting a reconciliation of the two perspectives, Nelson tries to find a freedom through language.

More than simply telling a ‘story’, Nelson considers here the act of trying to bring experience into language and ideas, particularly those which seem to oppose this very act. She incorporates an array of ideas from theorists ranging from Judith Butler to Wittgenstein in order to consider the inexpressibles of gender, sexuality, joy, and the seeming contradiction of queer parenthood and marriage—an experience increasingly brought into the mainstream of social structures and away from radicalism.

In the brief interval between my first reading of The Argonauts and the writing of this review, the Supreme Court has legalized same-sex marriage in the United States. This is, in many ways, an important and very positive development for queer rights, yet it is also far from an ending. In the book, Nelson pointedly notes, “if we want to do more than claw our way into repressive structures, we have our work cut out for us.”

Nelson’s was one of two defiantly queer books on motherhood I read this year. The other was Miranda July’s novel The First Bad Man, a fitting companion. Both books resist the idea of living a queer life inside restrictive structures. Both are guides, of a sort. For some, Nelson’s memoir provides a new way of seeing one’s place in the world against the “binary of normative/transgressive, ” with additional readings provided to go alongside. On the queerness of pregnancy, Nelson powerfully notes, “how can an experience so profoundly strange and wild and transformative also symbolise or enact the ultimate conformity? ”

The Argonauts is an urgent work, an intimate and fearless act of communication with the reader as Nelson describes moments of radical transformation: falling in love with Harry, and her pregnancy happening at the same time as Harry’s top surgery. Of this moment, she beautifully writes to Harry:

on the surface, it may have seemed as though your body was becoming more and more ‘male,’ more and more ‘female.’ But that’s not how it felt on the inside. On the inside, we were two human animals undergoing transformations beside each other, bearing each other loose witness. In other words, we were aging.

The Argonauts brings to the reader many moments of becoming, in both consciousness and body. I could write of  many more powerful moments in this book, but will stop here. This is a memoir to be individually discovered, read, underlined and reread. For its readers, The Argonauts should leave its own constantly transforming echoes.

Gabriel Chazan, a filmmaker and writer, is from Toronto, Canada. He continues to study art history at Sarah Lawrence College after an exchange at Wadham College, Oxford University. He particularly enjoys writing about contemporary art and photography.