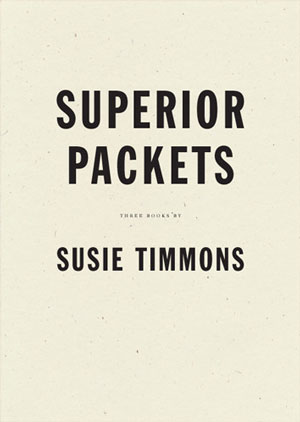 So often we find a characterization and romanticization of New York City within literature and film—the city forming a metaphor for struggle and loss and surrounding a scene with an obvious reminder that time (or taxis) waits for no one. If we close our eyes and imagine “New York,” we might see towering skyscrapers, new-age coffee shops serving only one type of organic bean, streets marred with the remnants of garbage and posters… This is the city that we know—the one that pulses continuously in our veins and invites a feeling of hunger or thirst, in that we cannot be satiated unless we are wholly involved in the movement, in “it.”

I find it important to imagine my own relationship to the city before interpreting Susie Timmons’ three-volume collection of poetry, Superior Packets, which takes on its own characterization of a late twentieth-century New York. Any place, the city or otherwise, can mold to the individual experience—within spaces and locales we encounter our own subjective realities that form the basis for our relationship to that particular environment. Out of these subjective events, these memories, we create our own understanding, our own identities that take on pieces of these locales as fragments of our individuality.

By understanding how I relate to New York, I can begin to see what Timmons’ work begs us to do—to peel back our stereotypical notions of it means, exactly, to be in “New York” and instead invest ourselves in what might be the epicenter of the city—the gritty enclaves that house isolation, love, loss, music, and the self. Timmons, through a minimal style that relies heavily on carefully selected words and images, creates a space where New York does not loom on the exterior but instead anchors inside and constructs a symbiosis of place and person that encourages the reader to feel the city as opposed to imagine it. 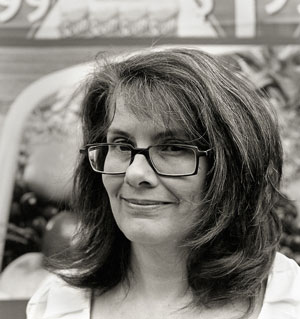 Superior Packets collects three books by Timmons—Hog Wild (1979), Locked from the Outside (1990), and The New Old Paint (2010). Together for the first time, these volumes cohesively work to project a vision of place as it inhabits the interiors of the self—Timmons is New York, and New York weaves within Timmons a sense of being that takes on the various landscapes she wanders through.

Though Locked from the Outside, the inaugural winner of the Ted Berrigan Award, seems to anchor the collection there is a noticeable flow of distinct image-laden minimalism between each section. Timmons’ language allows for the smallest of moments to become meaningful, her words fresh and able to speak volumes in just a few lines: “You, as useful / as a silk hat / in a hurricane / few things are / clear as the coast / is”.

We meet with Timmons as she observes and understands, walking alongside her as she reasons relationships and creates her own subjective space out of seemingly objective objects: “emphasis / falling like oaken shade / down elusive avenues / on two folding chairs / ambiguously symbolic / yet to be indelicate / alert and watchful / unfinished or better / as ever.” This is the place of internalization, where we accompany Timmons as she absorbs the landscapes around her and generates sense from otherwise innocuous things.

With short lines that play on double meaning and effectively utilize enjambment, Timmons’ work is reminiscent of Robert Creeley in that the focus is primarily placed on what would otherwise be considered mundane. A beauty arises out from these vignettes of lifestyle, as in “From The Twelfth Floor of 170 Fifth Avenue”—“to the north the sky is yellow and it’s snowing / right across the way a woman in a pink shirt was shaking / a dust rag from a window of the historic Flatiron Building.”

One cannot help but connect Timmons to other prominent New York School writers, most notably Ted Berrigan and Alice Notley, who fashioned writing out of an interest in music, art, and the casualness of communication. An urban beat provides the undercurrent to Timmons’ New York, and her poems at times entertain this musicality through a pronounced focus on sound. These moments of onomatopoeia seem to incorporate the tactics of language/sound poetry, asking the reader to take these unexpected interruptions in flow and disseminate meaning. Timmons writes in “The Thing Sticking In My Mind Is The Sunshine”: “with the wind blowing our pretty hair about our ears / YYYYYYYYYYYYYYYYYY / is pale,” and we are left to make sense of “YYYY” by recalling our own subjective experiences of rushing wind and half-closed eyes.

Superior Packets extends a hand and asks us to, within the fast-paced cityscape, slow down and peer into the nooks and crannies that would otherwise be overlooked. In the realm of objective space, New York provides a curious intersection between struggle and art, luxury and opulence. The strength of Timmons’ work comes from her ability to shred stereotype and create a space within which garbage, photographs, the fluttering of a scarf, and historical streets converge in an exquisite minimalism devoid of rush and instead fueled by momentary quiet. We must hush ourselves to see what Timmons sees and feel what Timmons feels, giving up our own relationship to the subjective, to our own New York experiences, in favor of Timmons’ understanding. To be privy to Timmons’ city is to become enveloped in what might otherwise be forgotten—that “this fragrant handkerchief / is heartbreakingly startling” and that New York, in all its crispness and bustle, makes space for everything.