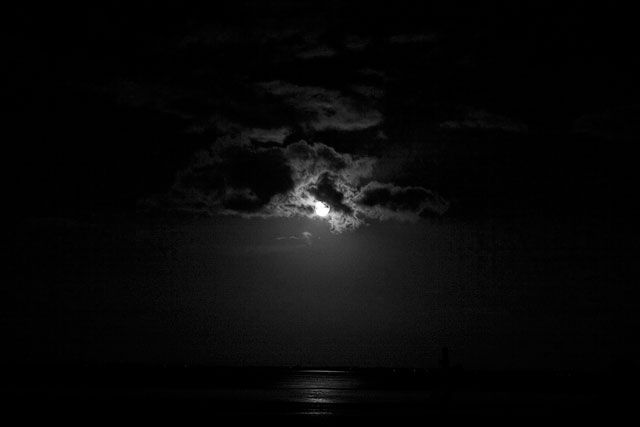 Story of the Moon

He held out both arms like someone innocent being
arrested, showed me the long vein for the black panther
he’d wanted, something Vietnam vets got, tracing
his finger along where the panther would go
if there was one. When it rained we went
to Pakistan with pillows soft as cats, something killed.
A boy carried scalding milk in a giant saucer pan, the coffee gone
or cold, a girl throwing flour. A style of font was invented
in the sixteenth century—does Claude Garamond feel
the pretty serifs? What about the white house in trees?
I’m not happy with smithereens, an Irish word, smidirin.
We’ve been covered by sea dozens of times. The base of
despair is speed, but acid brought all the animals
in the house together, sleeping on the floor. I’ve already seen
you here trying to live modestly, the story of the moon
that we are always new. Time was there was a time
on the boat to Inishmore, I grabbed his forearm so I wouldn’t
fall, so I would be pitapat again before the pitchblack blend
of bodiless, before the pippin has more heft than me.
So I would hear the mute letters, the silent e,
be no nevermind. Sailors talked fast, especially the dark-
haired to my left sitting on the lip, in marble snaps.
When they tied the rope to Tranquility, he walked the boat
edge like a balance beam, the gap between the water green,
narrow shaft between the boats, so I grabbed his hand
and forearm too, like a rope in my hand, the muscle of making
one’s way, my hand a matrimonial. Neighbors’ matchboard
tongues pitying the groove my feet make around the lake,
my lake latitude, my hands of the bride and groom and toasts.

High in the house, I washed a dish,
and out the window
in the night I saw a film of white.
Through the trees’ dark hair,
a girl in a bridal dress.
Another girl in red shorts attending her,
arranging the veil.
And a third girl hidden
almost completely by the trees
except for the shadow of her body,
I mean, her body was a shadow, all darkness
and the flash of her camera.
Then they hurried, as if late,
through the sand beside my house
down to the sea,
no one out on a Sunday night
in winter. But the hands of the girl in red
were urgent to get the veil right,
transparency that I could feel
from behind glass.
It’s January, month of gates and doors,
solis dies, and at the ocean edge,
the sun had been on my face
late in the day. I said hello because
even fire that far away touches me. 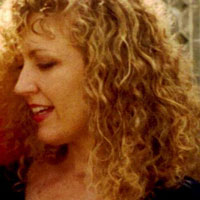