I was eight years old when the tree spoke to me. My dad had just gotten out of the hospital after a near-fatal heart attack, and I would ride my bike down to my elementary school to escape the new person who’d replaced the father who told jokes and let me walk across his back. I always brought a book. I’d lean up against the massive oak’s trunk, nestling in among the raised roots, and let the tree hold me. When she spoke, I thought it was the wind. When she spoke again, I thought it was birdsong. The third time, I knew I was both losing my faculties and gaining something magical. Her bark scratched at the place I couldn’t reach on my back. Her voice crept around the edges of my eardrums.

I won’t tell you what she said because it’s private, and because she’s dead, her voice alive only inside me. She was bulldozed down to make space for more classrooms sometime after we left North Carolina for Arizona in the early 80s. I tried to take my husband to meet her on a trip back home, but I found only concrete and steel, no hints of her whisper in the thick air. I cried on the new playground in the noon heat. She was gone. How had I not felt her leave? How it must have hurt to be rooted and unable to run when the saws came.

When I was undergoing surgery for colon cancer in 2017, I was pinned to a table, breathing anesthesia, unable to move when the knives came. Unlike my tree, I didn’t die, but part of me was sacrificed so I could continue to live. I don’t remember what happened in the operating room, but my body remembers I was not there to protect her when the surgeons drew out my blood. I still feel her fear when I touch the scars on my belly. My skin speaks to me, not in English, but in colors and sounds.

What language should a writer use for these liminal moments? How do we express a truth that is outside of linear time and dimensional space?

The colon’s function is similar to that of a tree’s roots. They both absorb the necessary water for the organism to survive and create a microbiome that helps all the other systems thrive. When roots rot, when the colon gets cancer, the future is unsteady. When I emerged from treatment, the edges of my world had blurred. My borders had shifted, and the story I wanted to tell was pulled from experiences I couldn’t point to on any map. Reality had become fluid; perceptions opening and closing like a fish gasping for air. I was in two worlds, grasping for footing.

I understand my world through what lives on the edges—the whispers of a tree, the energy in an object, the ghost in the kitchen. They are more real to me than rock, steel, and brick. When I write my stories, I infuse them with what I know: sentient places, hauntings, and dreams.

Was there room in literature for me and my story? A fractured person with a severed root system? And if so, what form would best reveal the truth?

I wanted to explore what happened internally after my cancer diagnosis. I wanted to write about my dead father and his dead parents, and I wanted to write into the ghostly arms of grief. My hauntings are my companions. You can’t see them, but I meet them every day. We break bread beneath my tree, and we trade stories of the dark.

“Write a novel instead,” I was told by more than one writer-friend. “Readers of memoir won’t accept that this is real.” I thought about it. I’d written novels before. I love fiction. But calling my inner journeys fiction would be the lie—a disservice to a lived experience. If I denied my tree’s voice, what kind of friend did that make me? If I still feel her, solid trunk, scratching branches, why would I disrespect her by dismissing her presence?

Speculative memoir allows for an explosion of the inner landscape. By utilizing speculative elements to dramatize an internal transformation, a work becomes elevated and opens to stories that transcend the five senses. Through speculating, we gain new vision.

The day after my diagnosis, I started drawing again for the first time in thirty years. At the time, I only had an iPad and my finger—no stylus—but I enjoyed playing with color and shape, and my touch on the screen soothed me. The first piece I created was a silhouetted witch holding a lantern, walking with her black cat on a bright orange background. I knew that no matter what happened with cancer, I was about to go somewhere unfamiliar. I was going under. I was going in.

I printed that piece and pinned it above my computer, and it served as a guide for my forthcoming book, A Constellation of Ghosts: A Speculative Memoir with Ravens. The journey of the book wasn’t cancer, though that was certainly something I experienced. The story of the book, the truth of the book, was how cancer triggered an exploration of unresolved grief and intergenerational trauma. The external period of that year of my life was spent mostly indoors, mostly in the bathroom, and mostly in bed. But the landscape of my interior lit up, and on that velvet-curtained stage, my dead father appeared to me as a raven and began to speak.

We can’t see it or touch it, but we all know it is there. 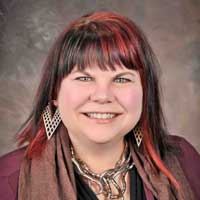 Laraine Herring’s latest book, A Constellation of Ghosts: A Speculative Memoir with Ravens, will be released in October 2021. She’s the author of a trilogy of writing books, including Writing Begins with the Breath; a tenured professor of psychology; a book coach for women over 40; and the founder of Hags on Fire, an online ‘zine for women writing about menopause and aging.