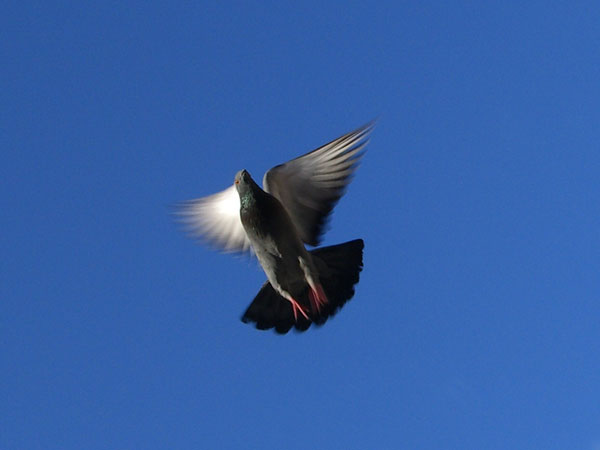 He was hot, too hot, walking on the sunny side of the hard stone streets through tourist stickiness of dripped gelato. He felt as wilted as the reddish-pink blooms that drooped out of the doorway, and he could smell the roach poison they must use here, wafting up from small dark gaps at the base of the buildings. He avoided the pigeons, suspected they were diseased, though he could hear their burbling as they waddled on the dirty streets.

It had been churches today, and each of the dim, frescoed interiors had been a calm relief from the crowds and the heat. But the religious art had oppressed him. In the last church he had stared at an awkward painting of Mary Magdalene, blonde hair covering her entire body, ending with sharp points like the tongues of flame. And there had been another Crucifixion, the blood dripping down the underside of Christ’s arm in attenuated strings of red and piling up like viscous thread at the stones of his feet.

He began now to cross the street in the hot sunlight, hoping the shaded side would be cooler. He heard a Vespa behind him, and turned to see if he needed to hurry across to the narrow sidewalk and huddle against the stone wall. But the Vespa, and its helmeted rider, turned into a small side street.

When he turned again to look up the street, his eyes caught the blinding sunlight, and in the moment it took for his sight to readjust, he saw something coming at him in the blue wedge of sky visible above the street. It was a pigeon, flying down toward him from the rooftops above, its beak a clear centered point, its wings outstretched so they appeared to meet the buildings on both sides. It’s that image, he thought, the image of the Holy Spirit that I had thought so artificial. He continued to look, unblinking in the middle of the street, as the bird kept coming at him in a swift glide, until the bird turned to the side to land on the blackened stone of the street. It had been a hot dog bun it was after, he saw now, as the pigeon began to peck at the gritty bun.

In the cool of the shadow now, he continued his walk up the street. The image had been in a painting of the Pentecost, the apostles below with red tongues of flame on their heads. The dove had been above, in a circle of incised gold. It was the same straight-on image, the centered beak, the wings outspread. In the church, he had thought, who has ever seen a pigeon like that? But now he knew they had taken it from life. Five hundred years ago, walking the stone streets of Florence, they must have seen it too, coming right at them, something they could paint as the Holy Spirit, in the form of an everyday sight, a hungry pigeon flying from the cool air of the rooftops for a piece of broken bread. 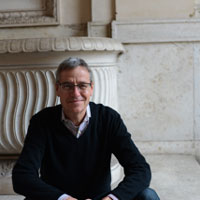 Thompson Mayes is a graduate of the Johns Hopkins Masters program in writing and wrote “Pigeon” while studying in Florence, Italy.  Currently living in Rome, Tom is the recipient of the National Endowment of the Arts Rome Prize in Historic Preservation from the American Academy in Rome, where he is writing about why old places matter.