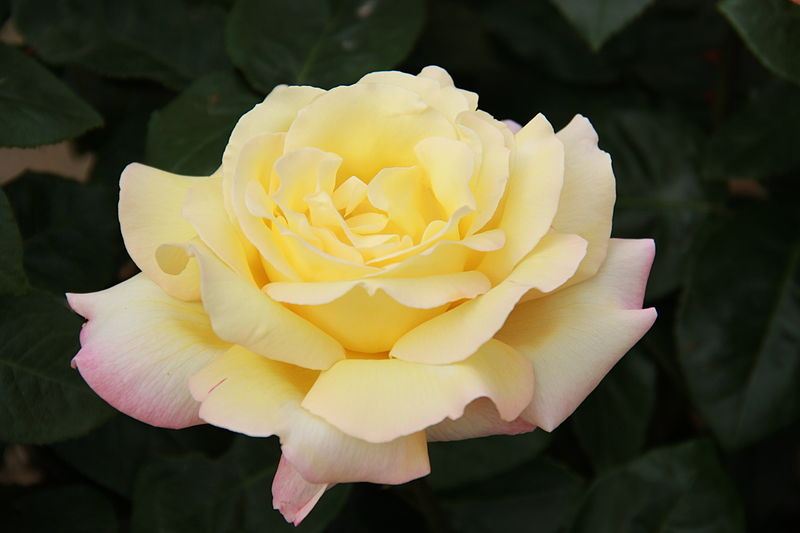 PEACE
from The Names of Roses
by Ann de Forest

Peace Rose: Just before Germany invaded France, a French horticulturist sent cuttings of his newest rose to friends in Italy, Turkey, Germany, and the U.S. to protect it. It is said that it was sent to the U.S. on the last plane available before the invasion. Because the cultivators couldn’t communicate during the war, each country gave the rose a different name. In France it was called ‘Madame A. Meilland’ in honor of the breeder’s mother, in Italy ‘Gioia,’ in Germany ‘Gloria Dei,’ and in the U.S. ‘Peace.’

“Can’t I have peace at my own table?”

Our mother’s war cry. The very mention of peace sets our teeth on edge, steels us, her adult children, into contention. My father glares at us, grits his teeth and shakes his head in frustration.

“Listen to your mother.”

But it’s always too late. Raised voices escalate to accusations to shouts to crashing plates to slammed doors to hysterical crying to uneasy sleep. The morning brings resentment disguised as remorse. Then five months or even a year later we get together again and let past grievances erupt at the dinner table. It seems that peace has become impossible. Our history, shared but not agreed upon, stands in the way.

World peace is a different matter. It’s something all of us agree to wanting. Mac, when he was twelve, bought a candle at a fair and set it on top of the television next to his marksman trophy from summer camp and a basket of dried flowers. It was shaped like a peace symbol in lurid pink and blue wax. “We won’t light this until the war’s over,” he solemnly announced. For years, we kept our passive vigil. The candle’s colors faded, covered in a layer of dust. We imagined the end of war as an event worth celebrating, commemorating. We had all seen the pictures of V-J Day, of women kissing soldiers, of crowds rejoicing in the streets.

The war, our war, didn’t end in celebration. It simply petered out. Fighting against the war, flouting authority, had been exhilarating. The war’s end couldn’t match the excitement of protest. My family finally did light the candle, though. The lights in the living room were out; the television, for once, was silent. The flame shone behind a translucent wall of wax. We ate dinner by the flickering lavender light, and watched as the peace symbol collapsed, melting into a shapeless heap. Afterwards, Mac, Elizabeth, and I played distractedly with the hot drippings, molding them into fantasy creatures, spreading the wax in thin sheets of color over our hands and arms. “Stop that,” my mother scolded. But we were too engrossed in the candle’s warm oozing to pay attention.

“No one is ever going to criticize me in this house again,” my mother announced after Grandmother died. Grandmother’s house would become her house, her haven. Still, we continued, unconsciously, to follow Grandmother’s rituals and habits, as if she were somehow embodied in the house, as if the walls and books and rugs and furniture bid us dress for dinner and dine at seven sharp with candles on the table. At Christmas, the family had always recited together the story of shepherds huddled on the hill dazzled by an angel’s glad tidings of a great joy, the verse that ends with the famous Christmas sentiment: “Peace on earth, goodwill toward men.” When we finished Grandmother would light the Christmas candle and ask for a wish for the good of the house.

“What do you wish for?” Mac once asked me. “I never know. I always wish that the house won’t burn down.” He laughed, “Me too.” Then Elizabeth piped in, her little voice somber, “I wished that the house will always stay in the family.”

The Christmas after Grandmother died, we rushed to prepare dinner and wrap presents and decorate the pine bough over the fireplace, then met in the library, beginning our ceremony breathless and uncomposed. We finished our verse too quickly and looked at each other, awkward for a moment, waiting for Grandmother to appear, to take her part. Father handed the matches to Mother who lit the candle and invoked the wish. Then, to my surprise, she turned to me and asked me to fill the rest of Grandmother’s role, to read the closing passage from John.

I opened the book and read the familiar words: “Peace I leave with you, my peace I give unto you; not as the world giveth, give I unto you. Let not your heart be troubled, neither let it be afraid.”

Author’s Note: On a street where I once lived an unknown neighbor grew roses in his front yard. In winter, they all looked alike, thorny brown branches without blossoms. I wouldn’t even have noticed them if it weren’t for the hand-lettered placards that gave each rose its name.

Those were the names of the front row of roses. Every time I walked past I would read that list, until those roses’ names linked like a poem in my mind. And then, reciting that accidental poem each time I walked by, those names started sparking memories. So I walked, read, recited, and remembered.

And then I wrote.

This vignette is one of four inspired by the names of those roses. 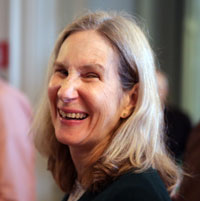 Ann de Forest’s short stories have appeared in The Journal, Hotel Amerika, Timber Creek Review, PIF—and the debut issue of Cleaver.  Fascinated by lists and other found text, she’s written a story inspired by the pictures in the margins in the dictionary and a family memoir suggested by the names of roses (excerpted here). Her first published poem, an erasure poem “blacked-out” from a newspaper obituary of Margaret Thatcher, is forthcoming in The Found Poetry Review.