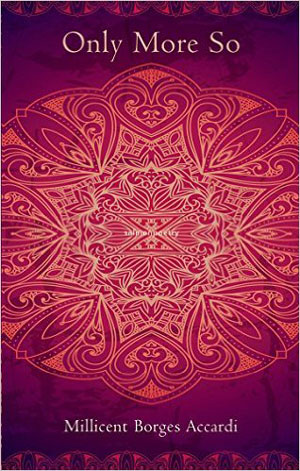 ONLY MORE SO
by Millicent Borges Accardi
Salmon Poetry

Only More So is a read for troubled times. War, climate change, cancer—it’s all here in forty-six poems of mid-life contemplation that simultaneously remind us that forgetting the past condemns us to repeat it and that celebrating the remembering is a necessary act of resistance and transcendence. Appropriately, the former sentiment originates not from Churchill, the statesman who appropriated it in wartime, but George Santayana, the poet who believed “only the dead have seen the end of war.”

Those predominately seeing the ravages of war in Borges Accardi’s unwavering, unsentimentally beautiful free verse lyrics are, of course, women. Because it is women for whom “it requires this cardinal leap of faith / for them to still / believe / they /are / female,” never mind human (“Faith”). Because it is a woman who, whether she apprehends “that nothing important ever belonged to her” (“Only More So”), or holds such knowledge “…at arm’s length, / away from sensation, into the deep” (“Arriving at the Place of Pain”), cannot escape the Body Politic as the Body. Because it is women whose bodies are the vessels of ethnic cleansing and gang rape (“Ciscenje Prostora”) as well as the ordinary assaults of illness (“Under Different Conditions”), aging (“Ordinary”) and irrelevance (“Arriving at the Place of Pain”).

Yet to Borges Accardi these women (and their men) are anything but ordinary, and like the young concentration camp victim in “Portrait of a Girl, 1942,” she allows each to be “the mirror for one who speaks.” These mirrors refract global, historical trauma and bend them into personal, contemporary ache and then back again through echoes of WWII genocides (“The Night of Broken Glass,” “In Prague”), instructions on surviving the vestiges of Salazar’s New State (“How to Shake off the Polícia de Segurança Pública Circa 1970”), pressures on a marriage in the early days of a serious medical diagnosis (“Arrhythmia”), and a belief that “New York and the Twin Towers would always / be there” and that “it mattered / when Audrey ate wheat germ and yogurt and did what / the doctor told her to, the rounds of chemo and radiations…” (“The World in 2001”).

I was in Paris at Père Lachaise with Only More So in my knapsack when I came upon the still fresh grave of a 21-year old woman who’d been killed at Bataclan months before. Shaken out of my tourist’s complacency, I was glad for the company of Borges Accardi’s words. At their core they reveal both the insubstantiality and indelibility of time and place, and our inability to escape the consequences of violence, or our contributions to it, though we are often lulled by routine to think we can. Consequently, like the “Recording Angel” in Carolyn Forché’s The Angel of History, we find “[i]n matter’s choreography of light, time slowed, then reversed until memory” holds us and we are “able to go neither forward nor back” until we are left “alone where once hundreds of thousands lived.” 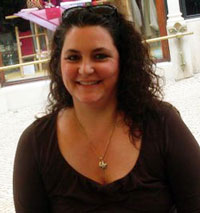 Borges Accardi’s narrators are often caught in such binds, having “to pretend / to be happy when the sheets / used for drapes begin to pull / at my heart…” (“Whatever”). And they sometimes become inured to the degree that, as Louise Glück observes in “Fatigue” (A Village Life), “Nothing remains of love, / only estrangement and hatred.” Only Borges Accardi’s version of that sentiment is “I don’t trust anyone / And love fewer than that”—an appropriate opening line for a poem about the abandoned and recently excavated Zanja Madre, the “Mother Ditch,” the original lifeline to Los Angeles before drought and escalating water rights conflicts. This poem extends the metaphor of women’s bodies that runs through the collection: “Once there was a brick tunnel / Encasing her water body…/ A life found. A life lost.”

This negotiation of embodying/inhabiting is a hallmark of the collection, revealing Borges Accardi to be a keen poet of place, or displacement as it were. We wander with her from Prague to Los Angeles, Portuguese New Bedford to Portugal itself, and places along the way or in between, as a way of “Inventing the Present”—to “co-habitate, to move / back…/ home into a comfortable time…/ the feeling of wholeness / lost and returned” and lost and returned.

She’s in good company. Like Forché, Glück, Philip Levine, and Irene McKinney, she bears witness to the pulses of history always threatening to undercut the birds in the trees, reminding us how, like the woman in the title poem, we “must survive by owning air,” and even then there is no guarantee.

paulA neves is a native of Newark, NJ whose writing has appeared or is forthcoming in Fiolet and Wing, The Abuela Stories Project, Kenyon Review, Queen Mob’s Teahouse, Writers of the Portuguese Diaspora, and elsewhere. Her artwork is featured in the Glassbook Project collections Provisions, Changed Relationships After 9/11 and Domestic Violence (glassbookproject.com). A Canto Mundo fellow, she has also received scholarships/residencies from the Sundress Academy for the Arts, the Luso-American Development Foundation, and the Disquiet Literary Program.