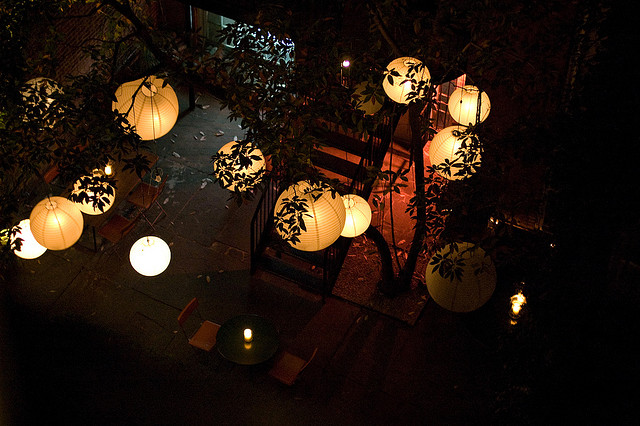 LETTING IT BE
by Stephen D. Gutierrez

They had reason to be in California at the same time, and loved the Central Valley, on the way to Yosemite, and us.

We got excited about a nice meal in the backyard, a barbecue—with me in a chef’s apron I hadn’t used, a silly one, and a Weber, still virginal, fired up and hot. We tidied up the house, and bought plenty of cheeses and crackers, and fluffed up the beds in the separate rooms—two true pals, they wouldn’t pad down the hall to a cracked-open door showing light inside, asking for a spare toothbrush or something, ah ha—and stocked decaf for one, and tea for the other.

“We’ll be ready.” I swept the patio. Jackie set the table, casually, you know, with just the right amount of finickiness and flair, and adjusted the hanging plants that garlanded the patio roof—gave them a good spray of water and whapped the cobwebs off.

And I turned around and my old friend, my grad school pal Sharon Dolin stood in front of me.

Then she broke into laughter. “You’re the same!”

And Cory Brown made a grand entrance after a delay, ceremoniously, freshly charged, coming through the side gate with a hoot and holler, “Hey there,” dropping his bag on the patio and ready to dig in.

I plopped a piece of meat on everybody’s plate, scurrying around the table with a pair of silver tongs held high and a larger plate offered with a fine selection of barbecue chicken, ribs, and beef to pick from.

“I want that one!” Sharon said.

And Cory said: “Just give me all you got, boy. One of each.”

Jackie picked a teeny bit of chicken and one fat rib. Potato salad got loaded onto the plates, arms outstretched, and the rest followed, all of us busy, busy serving ourselves at the table, eyeing the bowled food, talking, pointing, “I want some of that!” making sure not to spill.

“Oh no! I already got something on my blouse!”

“So does my chicken!”

“But first a toast,” Sharon said. She lifted a glass of wine. “To a good meal, a good conversation, a good visit! And friendship, fellowship!”

“Oh, yeah. She’s at Rutgers now? I thought she was at University of Chicago.”

“I never liked her,” Cory said.

“Now, now,” I said. “We’re three thousand miles away from that place. Let it be.”

“Don’t start singing The Beatles, Steve. Does he still do that, Jackie?”’

“Don’t ask her, Sharon. Ask me. You goddamn feminists! Just cutting us out of the game!”

“Oh, eat your chicken and shut up,” Sharon said, cheerily.

“I still sing The Beatles. In the shower. Only when I’m drunk, though.”

Sharon closed her eyes and nodded heavily. “When I find myself in times of trouble…”

“Desist, Sharon! You weren’t in such great shape that night, either.”

“This chicken is good!” She twirled a drumstick in her hand.

We spoke out of the sides of our mouths, asking after old friends and foes. We relived grad school, pleasantly, without bile, over it.

And when Garrison Keillor got too obnoxious on that damn Prairie Home Companion radio show, I got up to do something about it. I slid open the screen door to the house rather dramatically, and disappeared inside. I turned the damn thing off.

I came back out, relieved.

“Not yet,” Jackie said. “Let’s just sit out here for a bit. It’s nice when it gets cooler.”

“You’ve been resting for seven years, boy, since I met you, you damn poet, you.”

“Amen to that, amigo. You are right. I am a poet, a goddamn poet, a very rested one.”

“At least the poet speaks the truth.”

“I do exactly what I’m supposed to do.”

“Oh, brother,” Sharon said. Her eyebrows scrunched up, and she shook her head quizzically. “Where am I?”

“California,” I said. “The Golden Land.”

“Yes. I just wanted to make sure. So many have stopped. Dan, and Marla.”

“They stopped!” Sharon expressed astonishment again, aggrieved, and froze at the table. She made a good portrait of despair.

“They stopped before that,” Sharon said. “They’re done.” She remained frozen. She spoke the words automatically.

“Take me out to the ballgame…”

“Don’t bring up the Dodgers,” Sharon said. “Don’t talk about baseball. Please, no baseball here.” She cut the subject short with a quick chop of her hand.

“We’re talking about life,” Jackie said. She sat serenely next to her. She carried a baby inside. Nobody knew it.

“I know,” Sharon said. “I’m not anti-life. I want a baby, too, a child. I just don’t understand. Poetry!” She stood up and faced the cosmos bravely, chest out, fists at her sides, enraged.

She did Sylvia Plath justice. “Goddamn it, I’m going to write poetry till I die!” She gritted her teeth, saw the folly of her stance and re-sat herself in good humor, chuckling.

“I hope that the gods heard me, at least.”

She did write poetry past the time of childbearing. She endured a bad marriage with it. She earned a great name in the world of poetry. She raised a lovely, lovely child in Manhattan, single, tough, hungry. Cory deepened as a poet and made his own mark. He indulged his philosophical mind in the creation of complex, abstract essays with a social issue at heart. He won an award for his early poetry, and appeared in the right magazines later. But he suffered terribly in his life, lonely and guilty for the shabby treatment of a woman (or two). He left a trail of hurt.

Who could know any of this? Not me. I nursed my glass of wine. I got up to clear a space for a pie coming out later.

“I do,” I said, sweeping crumbs into my palm with a napkin.

“You made up words that don’t exist!”

“You did! Out there on the lake in grad school.”

“Oh, that was fun. You just don’t have as large a vocabulary as me.”

“Who wants tea?” Jackie said. She got up from the table. She smiled at everybody. Over the wooden fence in the backyard, a pale moon appeared in the bluish gray sky.

I asked what kind.

“What kind you got?”

“Just about every tea under the sun, boy.”

“I’ll take something good,” Cory said. “Whatever you got. Herbal.”

“How about you, Sharon?”

“We do,” Jackie said, struggling at the screen door with a handful of stuff.

“Let me help you!” Sharon sprang up.

Cory beat her to the door and opened it. “After you!”

“You still want to play Scrabble?” I asked.

We all stood on the patio now. We all pondered the big question.

“Sure! What are friends for?” Sharon said. “To beat at Scrabble!”

“And cheat.” Cory stood off to the side, staring at the moon grown a little bigger, a little fuller, the sky darker and bluer.

Jackie and Sharon disappeared inside. I carried in my own load of dirty dishes and silverware.

And Cory, the poet, whistled in the dusk.

Later in the full darkness of a pleasant evening with only a soft Japanese lantern hanging over the board, we said little, intent, eyes aglow, lips tight, finding the right words to put it all together. 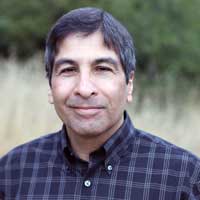 Stephen D. Gutierrez published The Mexican Man in His Backyard in 2014. His other books are Elements and Live from Fresno y Los, which won the Nilon Award (FC2) and an American Book Award, respectively. A fiction writer as well as an essayist, he has published his nonfiction in Fourth Genre, River Teeth, Under the Sun, Santa Monica Review, ZYZZYVA, Third Coast, elimae, Red Savina Review, The East Bay Review and Alaska Quarterly Review. He has a piece forthcoming in Fourth Genre, and is a current Best of the Net Nominee. He teaches at Cal State East Bay.