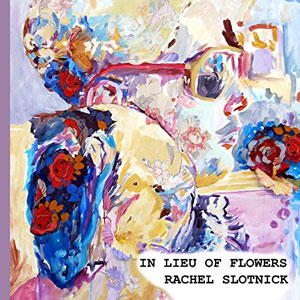 IN LIEU OF FLOWERS
by Rachel Slotnick
Tortoise Books, 48 pages

Rachel Slotnick’s debut collection, In Lieu of Flowers—an eclectic combination of lyric poems, flash prose, and mixed-media paintings by the author, who is also an accomplished painter and muralist—is part in memoriam and part Ovid’s Metamorphosis. The paintings are of particular interest because they play an essential role in how we understand the poems rather than being simply decorative or extraneous as can sometimes happen when paintings and poems are paired up together in such a context. Most are essentially portraits, though not purely mimetic ones.

Her paintings have a surreal quality, the edges often blurred as one image becomes another: a beard becomes a fish, a shirt melts into the coral of the sea floor, and flowers, always flowers sprouting where they desire. “I tried to paint my grandfather,” says the speaker, “and the figure devolved into flowers.” Often the paintings also include multiple perspectives of the same central figure, reminding me conceptually more of cubism than surrealism, Picasso’s figures (of Françoise Gilot, for example) often turning into flowers as well.

Althought Slotnick’s paintings and poems were conceived separately, it is clear that what motivated the creation of one was also at play in the other. The paintings often reinforce and reinscribe the central theme of transformation—both physical and metaphysical—specifically the kind that comes as we face the deaths of those closest to us. Slotnick’s speaker is caught in the act of remembering, is preparing for the eventual end by meticulously trying to pin down what refuses to stay put—the present.

In Lieu of Flowers is broken down into 3 sections, each addressed to a central character: The Fisherman, The Mathematician, and The Musician. Slotnick has said in an interview with Millicent Borges Accardi that she intended these poems to be expressly personal, that she intended to memorialize individuals from her personal life. The first section addressed to the Fisherman (her father) is the most profound and the most thoroughly developed in my estimation, though I must fully admit that I may be biased by the fact that my father too was a fisherman at one point in his life and so these poems spoke very directly to me. The speaker says, “When I turned seven, my father’s beard filled with salmon and seaweed . . . He spoke in an enormous gurgling noise which made everything sound underwater.” What I enjoy about these poems about her father is the tension between figuration and literality.

We can read the line about her father’s beard filling with fish and seaweed metaphorically—oceanic images being some of the most ancient and archetypal—but then we get lines like “My father is returning to the ocean, slowly, in the same way that we all eventually return to dust” and, even more poignantly, “When I realized my father was growing fins and gills, I wasn’t upset at first . . . but I didn’t realize my father wasn’t coming back” which make us question whether these are simply metaphors. And once we add the paintings into the equation, we realize that for the speaker these are in fact literal transformations. This tension makes for riveting reading, brings the brine and the salt wind to our nostrils as we watch her father, like Proteus, return to the deep where “all he can hear are sea shanties sinking towards the bottom.”

The second section is about her grandfather, the Mathematician. “After your grandmother died,” he says, “I was merely a placeholder for quantities.” The death of his wife empties him out, robs him of his faith in the logic that mathematics had always provided, makes a variable of him: “I thought X would remain constant. I forgot to factor Y (Years) and Z (memory)” or an empty set: “I know that I am just a placeholder for your Yiddish grandfather.” Without the two things that gave the world shape and meaning, the Mathematician loses himself completely, and his eventual death causes the speaker to turn inward toward the places where purpose seems dangerously close to cracking in her own life. 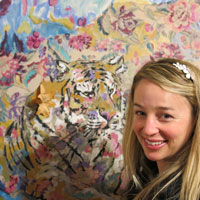 The rest of the middle section switches to focus on her life in Chicago, on her job as a City Colleges professor, and on the city’s epidemic of gun violence. A return trip home to California reminds her of her grandfather and of all the young people who committed suicide on the train tracks near his home. She says, “It’s easy to move away from a town and forget the epidemic of children committing suicide. It’s easy to leave Chicago behind, and ignore classroom voices, and the white lilies on the news.” Slotnick ends this section thinking about suicide. Something is left unsaid, I think. Is it, why didn’t her grandfather commit suicide when his life lost its meaning? Is it a question about what an individual should do if the things that make life meaningful abandon them? Is it a worry about the eventual forgetting that time brings—the guilt of the survivor?

In the final section, we are introduced to the mysterious Musician. He is not identified. What we do know about him is that he is at odds with himself, or rather he is at odds with his way of dealing with or understanding the world, which, of course, is through music. “When the musician discovered that he had been making music all along,” the speaker says, “he was disgusted. The music reminded him of bars named after ships named after women.” And yet, the musician’s disgust and resistance aside, the book begins and ends with song, with lullabies. The first poem is titled “A Defense of the Father in 25 Lullabies” and in the last lines of the last poem, “A Beginning (An Ending)”, we get a serenade—an evening song:

The birds played strange violins,
a string quartet to lull the morning.
I waltzed down the scale towards
the Cheshire Cat
and begged him to serenade me to sleep.

A lullaby is a very special type of evening song, one that is defined by the primal connection between parent and child. Though there is much sorrow in Slotnick’s deeply personal and moving collection, we end with song and a simple desire for the kind of sleep that can only be had before one has awakened to the inescapable truth of mortality, before so much remembering was even necessary.

Cleaver Poetry Reviews Editor Carlo Matos has published seven books, including It’s Best Not to Interrupt Her Experiments (Negative Capability Press). His poems, stories, and essays have appeared in such journals as Iowa Review, Boston Review, and Rhino, among many others. Carlo has received grants from the Illinois Arts Council, the Fundação Luso-Americana, and the Sundress Academy for the Arts. He is also a winner of the Heartland Poetry Prize from New American Press. He currently lives in Chicago, IL and is a professor at the City Colleges of Chicago. He blogs at carlomatos.blogspot.com. Contact him by email.