HAWAII IN LIVING COLOR
A Travel Essay by Ed Meek

It took a good two weeks to adjust to returning to Boston from Hawaii. Not because of the time change—that only took a few days. It was the shift in the color spectrum that threw me. In Hawaii, it was the vivid blue sky and the turquoise ocean, the yellow pineapples and the pink hotel, the white ginger leis and the red hula skirts. Here in New England, we’re eternally evergreen with gray blue skies and dark blue seas, we live in white houses and wear dark suits. New England is beautiful, yes, but in a much more somber, subdued way.

My wife, sixteen-year-old son, and I spent ten days in Hawaii—five days on Oahu and five on Hawaii—what locals call the big island. This afforded us the range of what Hawaii has to offer—from the romantic chi-chi of Waikiki, to the spectacular sight of an active volcano sending gleaming lava into the Pacific. 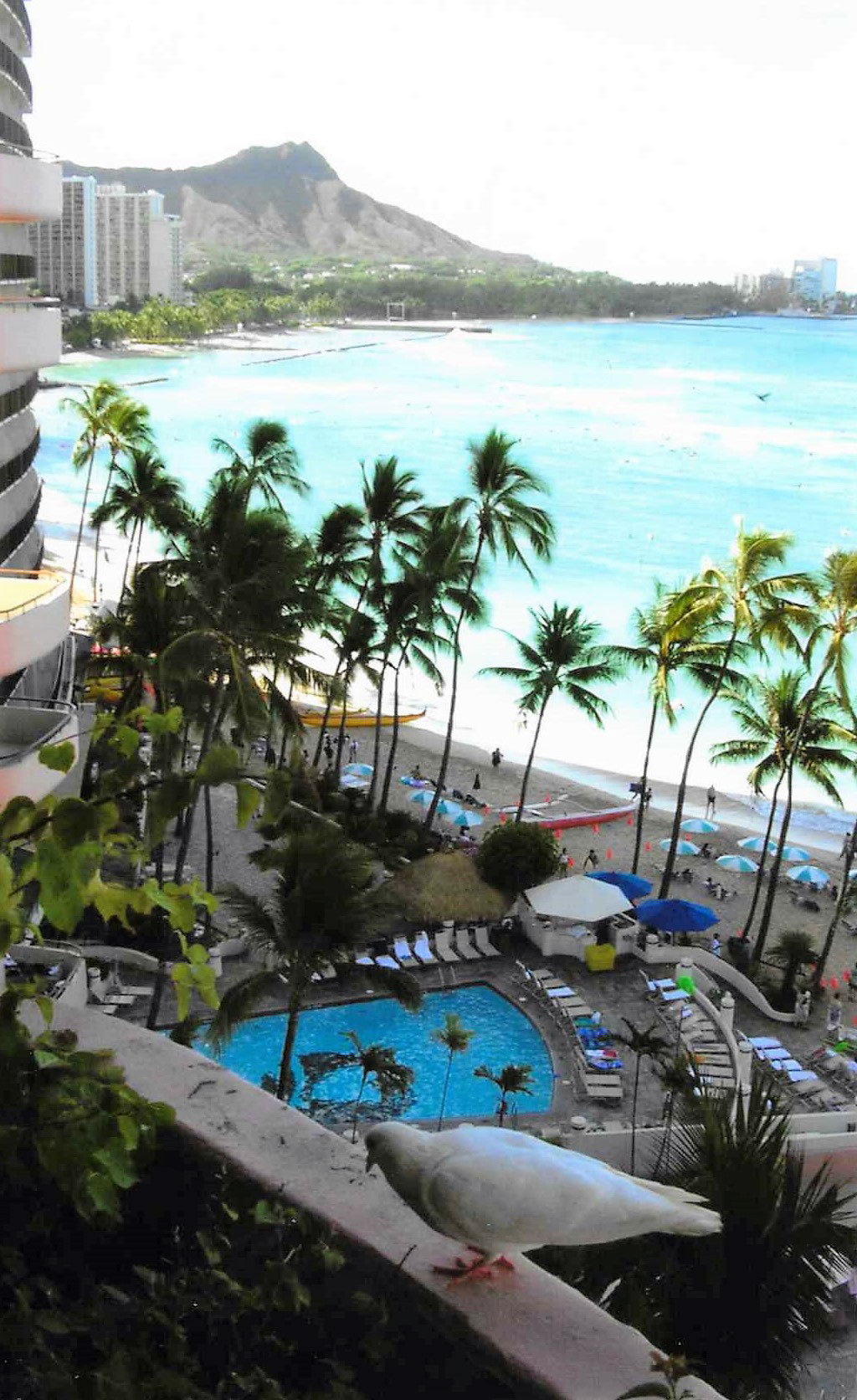 The first half of our vacation we spent on Oahu at the Royal Hawaiian Hotel also known as “the Pink Palace of the Pacific.” It is, as you might suspect, painted entirely in pink. The hotel employees wear pink. The bath towels are pink. Pink umbrellas float in orange Mai Thais. It’s a romantic kingdom rising out of the white sands and blue-green waters of Waikiki, where the ocean temperature was an inviting 80 degrees. Palm trees 100 hundred feet high cooled us like Persian satraps with their fronds waving in the wind. White pigeons greeted us in the morning when they perched on our balcony overlooking the beach where surfers rode four foot waves from 6 am till dusk. The long sloping beach was so different from the quick drop-offs of the New England shoreline, meaning a good surfer could ride a wave for more than 100 yards. At the end of the beach stood craggy Diamond Head, reminding us of the volcanic origins of all the Hawaiian Islands.

Flying to Hawaii from the continental United States, you gain six hours, so it doesn’t take much time to recover from the flight. We arrived late in the afternoon and, following a good night’s sleep, were ready to go. But, since this was just about the most beautiful beach the three of us had ever seen, we didn’t go far for the first couple of days. We wandered down to a sumptuous breakfast buffet with luscious pineapples and papayas, bacon and eggs, Kona coffee and fresh squeezed orange juice.

We body-surfed, swam and floated, and read beside the pool. At night, we had cheeseburgers, ahi and ono sandwiches and tropical drinks at the hotel’s casual outdoor bar and restaurant while we watched the sizzling sun take a well-deserved dip in the ocean. On the second day, my wife went shopping in the giant mall next to the hotel while my son and I took surfing lessons. With the help of a native Hawaiian surfer we were soon riding long boards on the smaller two-foot waves. When we’d conquered those, our instructor took us out to the bigger, three-or-four-foot swells. It was definitely fun, and all you needed was a surfboard. There were no ski pants, jackets, googles, helmets, boots, skis, snowboards, and no tickets.

On the third day, we hooked up with one of my wife’s college friends—a woman who was originally from Oahu and who had recently moved back to Hawaii from Cambridge, Massachusetts. She took us on a whirlwind island tour first to the top of Diamond Head and up the windward coast to the Pali Lookout, where Kamehameha, the original founder and ruler of Hawaii, drove thousands of his Hawaiian enemies off the cliffs in 1795 to unite the islands under his rule. Then we drove down to Kaneohe Bay, where another spectacular beach beckoned us to swim and snorkel.

On the fourth day, we visited the Iolani Palace and learned the history of Hawaii’s tumultuous relationship with the continental United States. We had forgotten that Hawaii wasn’t granted statehood until after World War Two.

During the nights, we trolled the streets of Waikiki. They were jammed with American and Japanese tourists; local wide-bodied Samoyans; beautiful dark-skinned, dark-eyed Hawaiians with long black hair; and skinny, long-haired refugees from the sixties that looked like hippies. It was a wild scene. By the fifth day we were ready to get away from the crowds.

We flew to the Big Island where we were to meet up with a group from an active tour company called Backroads, a U.S. based outfit that leads tours for families and adults all over the world. We had three guides leading four families—18 people total. 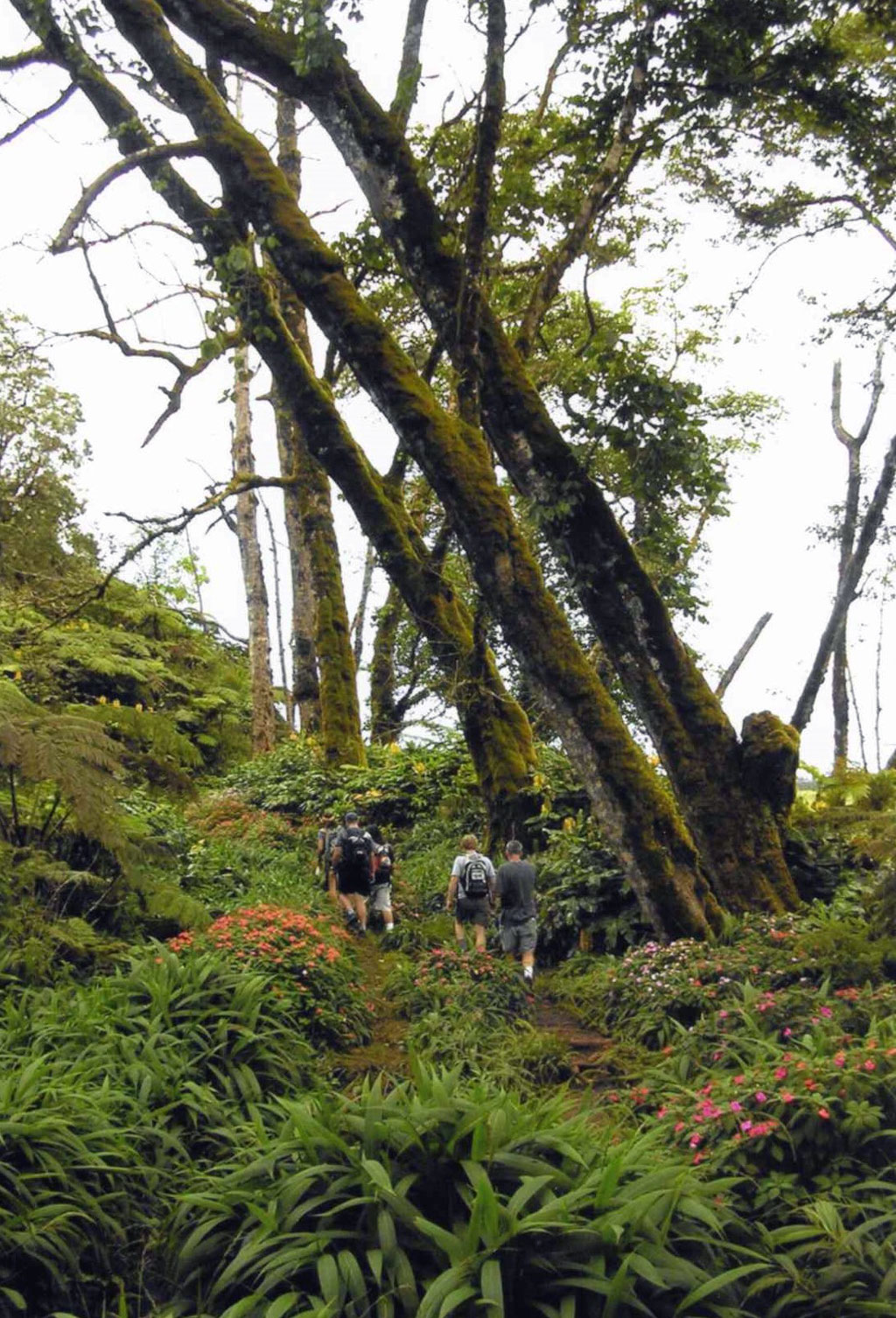 We began the tour at the Parker Ranch, one of the biggest cattle ranches in the United States, and then we took our bikes (provided by the tour company) and rode from along the tree covered Mamalahoa Highway and all the way out to Laupahoehoe Point State Park on the coast. There were highland prairies on one side with monkey paw trees, and on the other side dramatic cliffs dropping down to the sapphire blue ocean. Biking was and still is the best way to see a place.

From the coast, we loaded the bikes onto the vans and drove up to Volcano Park to spend two nights at the funky and somewhat musty Volcano House, a hotel located right next to the Kilauea Caldera, a crater that sits atop the most active volcano in the world. Kilauea is a shield volcano, which means that the crater is shaped like an inverted shield composed of a combination of smooth and crumbly lava called pahoehoe and a’a. This makes for a truly, otherworldly moonscape. Steam vents reminded us of the hot lava two miles beneath the surface of the earth. In the morning, we were given a tour of the Caldera by a volcanologist who led us from there into a lava tube—a tunnel formed by an eruption. After, we biked around the ten-mile loop that encircled the immense Caldera.

The next day we pedaled down from the volcano to the southernmost point in the United States and on up the west coast past the site of Captain Cook’s demise to Keauhou Kona where the famous coffee is grown. At the beach next to the hotel there was good snorkeling above coral just offshore where multicolored angelfish and blue tangs swam with giant sea turtles.

That night, after dinner, we drove south to Kau Loa Point where we walked out over the smooth and wrinkled black lava field from the 1950 eruption, to a site 300 yards beyond the point where, from cliffs overlooking the ocean, we could watch gleaming hot lava flow down from Kilauea and right out of the cliffs—what locals call the witch’s nose—into the ocean where the lava sizzled and crackled and hissed hot gas into the air until it was swallowed by the relentless waves. This is a sight best seen at night and a fierce reminder of what simmers at 2000 degrees two miles beneath the surface of the earth.

The next day we met with a local kayak tour guide who outfitted us in sea kayaks and led us two miles down the coast to a secluded point where we went cliff-diving. There were jumps of 10, 20, and 30 feet for the daring. The water is so clear that the rocks beneath the surface, although they are 15 to 290 feet down, are entirely visible, adding to the challenge of cliff-diving.

That afternoon we took the van northeast to continue around the island and spend the last two nights at the beautiful Fairmont Orchid resort on the Kohala coast. Here we found, amidst a lava field, perfectly manicured golf links and giant interconnecting swimming pools surrounded by palm trees. That night we swam in the pool and stared up at the stars through the swaying palms.

On the last day, we drove back north and hiked into the Waipio Valley. After two hours of hiking through bamboo groves, the trail emerges at the upper rim of the valley, where a 200 foot waterfall runs down to a stream on the valley floor. Continuing on the trail, we reached a point from which we could see the ocean 30 miles away between the mountains. We had lunch on a knoll, a short walk from where a landslide had wiped out the trail.

The next morning, we flew back to Oahu and from there we went on home to Boston, where the longing for the vivid Hawaiian hues was disheartening. Nonetheless, a rare experience in our age of hype, Hawaii lived up to, even exceeded our expectations. 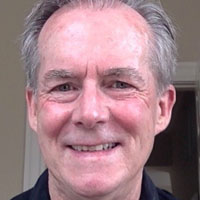 Ed Meek is the author of Luck (short stories) and Spy Pond (poems). Follow him on Twitter @emeek.