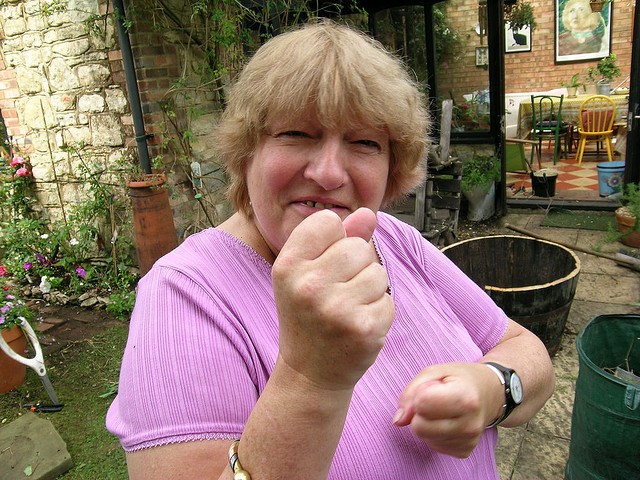 Elmer was in the kitchen fixing himself two eggs over easy when he heard shouting outside. He turned the burner down, went to the window. Out near his mailbox, where the children gathered to board the yellow bus, two girls argued.

Elmer waited. He tried to decipher the voices and gauge the threat. It sounded like one of the girls said you bitch. At first the spat seemed normal, natural. But when the girl in the pink dress struck the girl in the blue dress over the head with a tin lunch pal, Elmer’d seen enough.

He stepped out onto the cool concrete, barefooted. “You girls end it right now,” he said. “Or I’ll come down there.”

The girls had dropped their lunches, and each now clutched a fistful of hair. With locked bodies they jerked, cussed. Then they both fell to the grass and wrestled, arms twisted, before the one in pink got on top, continued slapping and pulling hair. Behind the girls a group of children, ranging from first to ninth grade, crowded around; the mob coalesced, blocking the fight from view.

Elmer hustled to reach the children as fast as he could. He had a bad back from years of block laying. When he finally got there he pushed his way ringside. A little blood dripped from the bottom girl’s nose, and the girl in pink still straddled her, kicking ass.

“Come on, break it up,” Elmer said, and he placed a hand on each girl’s shoulder, pried them apart.

Then Yolanda, the neighbor across the street, stepped out her door with a sheet wrapped around her.

“Ellie,” she said, “don’t take that shit from her. If she’s still picking at you, you better finish that little bitch.”

Ellie, the sufferer through the ordeal, managed to stand at the sound of her mother’s voice. She wiped the blood from her face with an arm, then latched onto the girl’s hair, dragging her to the ground.

Now, Elmer had a problem. The children pushed, roared, cussed; foam formed around their tender mouths like wolves in drought. “Move back, step back,” Elmer said, and extended his arms to corral the children. The two girls still rolled in dirt, trading blows with clenched fists.

Before Elmer could separate them again, Yolanda hustled across the street to the huddle, silk sheet still draped around her. She pushed to the front.

“That’s it, Ellie. Come on, girl. Hit her good goddammit.”

“What you want to do that for?” Elmer asked. “They’re kids.”

Yolanda gripped the sheet above her breasts, ignored him, continued yelling. One of the middle school boys, with a dog collar around his neck and orange hair, went to his knees. He scooted under Yolanda, stuck his head beneath the sheet.

Elmer leaned down, took ahold of each girl’s arm, and started to lift them. Then he felt a sharp pain in his lower back, an explosion of numbing sensations that branched into his arms, his neck, his checks.

“You touch my daughter again you bastard and you’ll find yourself on the sex list,” Yolanda said.

Now the school bus rumbled up the block and a few of the other neighbors had stepped out onto their porches to see what the commotion was about. Three houses down from the melee, Carol Varney stuck her head out the door of her colonial wearing an apron, presumably looking for her daughter.

Meanwhile, the children rooted and Yolanda coached. At times the girls traded places on top, though both were losing energy, momentum, and their movements, their blows, became slower, less forceful over time.

Elmer flinched whenever a body crawled over him or a shoe landed beside his face. He felt paralyzed from the waist down. Through the tangle of legs, he could see the girls, weak and beaten. Then Carol pushed her way into the group.

“That’s enough. You kids know better. Debra, stop, get up.”

“Oh, so now Mrs. Riches needs to throw her dollar in,” Yolanda said.

“You heard me, bitch,” Yolanda said, and grabbed her, hit her in the eye.

Carol went down, and Yolanda pounced. During the sucker punch Yolanda’s sheet fell off. She was bare-breasted and the children turned their attention to her, to them, in pure hysteria; the orange-haired boy had resorted to shoving first and second graders out the way to capture it on his phone.

“Somebody help me,” Elmer said.

The mothers and daughters, in their separate snarls, proceeded to fight.

“C’mon, dammit,” Elmer said, and tried pushing himself up but couldn’t.

The bus slowed to a stop alongside the ruckus, hit the lights. Elmer watched as the innards of the bus ignited—the motionless shadows of children finally awakened—into a shove fest. Before the woman driver, who also substituted as the school’s wrestling coach, could get the door open, the children all wedged to one side, rocking the bus. The bus windows clunked and miniature arms and faces emerged through parted glass.

The bus driver unlatched her safety belt and stood. “Everyone remain in their seats and no looking by golly.”

Elmer said, “Hey, driver,” and waved to get her attention.

She must’ve failed to see him because she grabbed the sheet, threw it over Yolanda, then lifted her in a bear hug. Yolanda kicked. The bus driver whispered into Yolanda’s ear, and Yolanda quit thrashing. Carol remained on the ground, unresponsive. The bus driver then shooed the kids onto the bus, returned and lifted Carol and carried her on.

“Hey, dammit, hey, what about me?” Elmer asked.

Yolanda nodded and the driver nodded back before the bus doors closed.

As it rolled on, Elmer yelled but nobody came. He rubbed his belly and counted the cinder blocks that held his place, a foundation of stone and blood he’d once set alone; though all he could do now was wait for someone to stop and help carry him home. 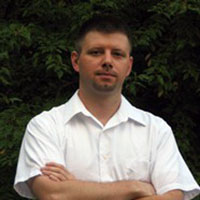 Keith Rebec resides in the Upper Peninsula of Michigan. He’s a graduate student, working on an MA in Writing, at Northern Michigan University. His work has appeared in Monkeybicycle, apt, Underground Voices, and Split Lip Magazine, among others. He co-edits a literary magazine called Pithead Chapel and you can learn more about him atwww.keithrebec.com.