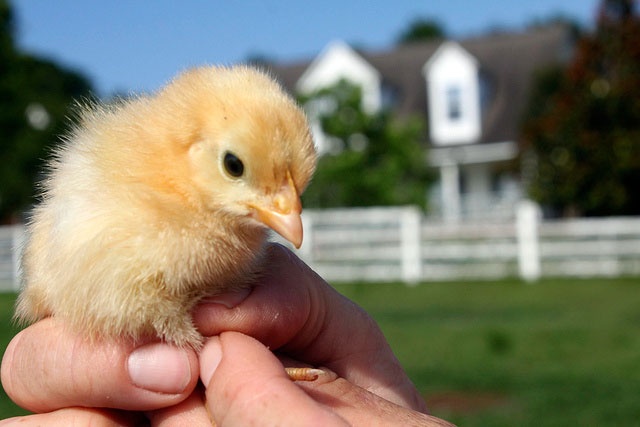 I.
Rosa stands in the coop’s doorway holding a baby chicken in each of her hands. One of the birds is dying. The other is dead. We might have overlooked the body in the bed of wood shavings covering the ground if it hadn’t been encircled by a dozen other chicks, their feathers warm under the amber light of heat lamps. Yesterday it was an alive, palm-sized animal, toddling around on legs like twigs. Now the body is badly decomposed, everything but the beak flattened, the eye sockets pecked clean.

It’s June in Florida. The sun is just rising over the panhandle farm. In this heat, it doesn’t take long for a body to break down. Everything seems to droop and sag.

“Anoche pasado,” Rosa says with a resolved tone, holding up the deflated body. “Problamente,” I agree. As if I know.

II.
Rosa’s rarely wrong when it comes to plants and animals. She’s been working on farms since she was a little kid in Southern Mexico, when her dad left the family and her mother fell ill. She left school to work in the fields. Now she lives in a small town closer to the Alabama border than the beach and she has daughters of her own. This farm is organic and Rosa is the owner’s sole employee. I’m not much help to her. I know nearly nothing about caring for plants or animals. I’m volunteering during a break from school and I’ve only worked on the farm for a few weeks. In a few more, I’ll be gone. Most days I watch Rosa’s every move, following her lead and trying not to get in the way.

This chick’s death is no great mystery though. We had picked it up, and a hundred other hens, the day before. The birds hatched from eggs at a farm in New England, and traveled in a box stacked in the back of a truck to the Florida panhandle. Rosa and I arrived at the post office before it officially opened. The employees giggled as they unlocked the front door and handed over the cardboard box, all beaks and peeps. On the drive back to the farm, Rosa sat in the back seat with the box of birds in her lap, watching them peek out the breathing holes.

A chorus of squeaks rose in response.

III.
When we opened the box, most of the puff balls filed out in a frenzy. Some didn’t. They hadn’t survived the trip.

“Es normal,” Rosa said, throwing their bodies in a bucket and leaving it next to a pile of burlap sacks in the driveway. We’d deal with it later.

The sky darkened and, across the pasture, the donkeys brayed.

With clothespins, we fastened a blanket around the coop to protect the birds from the wind and approaching storm. We turned on an extra heat lamp. The chicks gathered beneath the the low-hanging lights, a single mass of downy yellow fluff.

Rain started to fall, and we tended to the farm’s other animals: the ducks and goats and geese and sheep.

We forgot about the bucket of chicks, with the corpses curled at the bottom. Overnight, it filled with rainwater while the farm cats slept nearby, piled on top of each other. By morning, the chicks had floated to the surface and maggots bulged from their eye sockets. Their skin pulsated with the larvae squirming inside. I stood back and stared, finding a long stick to poke around with, gagging but fascinated. When the time came, I was too repulsed to throw out the mess, so Rosa dumped the bucket in the trash, double bagging it.

“I’ll put it by the road when I leave,” she said. I didn’t offer to help, but I should have.

IV.
The second chick in Rosa’s hand isn’t dead, but it is dying. It can’t stay upright on its feet. It takes a few steps and topples over. Rosa carries the chick to a tray of water mixed with just a little sugar. The birds are so small that many of them stand in the shallow water while they drink, beads of liquid clinging to their downy coats.

“Come on, take a sip,” Rosa says softly, dipping the beak. She scoops the chick up and waits for its neck to stretch upward, for the water to run down its throat. The chick’s head wobbles side to side, but little else. Rosa tries again. Her requests become commands.

“Take the water,” she says forcefully. She watches for a moment, then shakes her head, resolved. She puts the little guy down.

“Because it’s dying,” she says.

She gives me a sideways smile and heads back to the farmhouse. There’s more work to do. I don’t follow. I try to cradle the bird in my hands just as Rosa had and wait for it to open its beak to drink. I return the chick to the ground, and it collapses on weak legs. I prop it up again, holding my hands on either side of its wings while it struggles to maintain balance. Eventually it just topples over once more, as I knew it would. I sit on the roosting bars and scrutinize the exhausted animal, repeating the process again and again. I stand it up a final time and nudge the chick to walk. It just falls over, and goes limp.

No longer dying, but dead, as Rosa had said.

I don’t carry the still-warm body, with luminous eyes exposed by lids that won’t stay shut, up to the house. I can’t bring myself to do it. I leave it in the coop, surrounded by healthy chickens, telling myself that it might still be alive, that it just needs time under the heat lamps.

But I know that’s not true. I know its body will be overtaken by pecks and bugs in a matter of hours. I know those twig-like legs will stomp it flat. 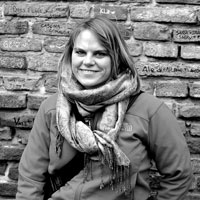 Danielle Harms is a writer based in Washington, DC. She is an Assistant Term Professor in George Mason University’s English Department, where she earned her M.F.A. in creative writing and was the editor-in-chief of Phoebe: A Journal of Literature and Art. She writes about everything from the classroom and overseas travel to her research on the Korean women who survived “comfort stations.” Read more at danielle.harmsboone.org.