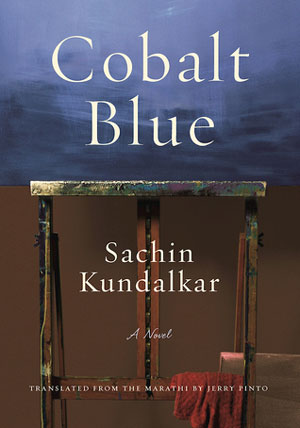 Tanay is a young, closeted queer man trying to work through an internal rut by living for the company of and validation from others. As Tanay befriends an out-of-towner renting a room in his family’s home, he finds himself in awe of the Guest’s ability to thrive in solitude, to fully embrace his mood of the moment, to being in a class of “men who lived their own idiosyncrasies” (the house guest is unnamed in the novel, but for the sake of clarity in this review I call him the Guest).

It’s enough to gradually wrestle Tanay out of his day-to-day haze, to make him “aware of the mediocrity, the ordinariness” of his “secure and comfortable life.” Anuj, Tanay’s fiercely independent younger sister, is also taken by the Guest’s charms, but to different effect. For Anuj, the Guest doesn’t so much unearth a hidden urge to be, he reflects and accepts with ease the off-center personhood that comes natural to her, a personality she’s often had to defend to claim as her own.

Cobalt Blue, which follows this unusual love triangle, does not depend on surprises or plot twists to give weight to its characters or to make its point. The siblings mostly remain unaware they share the same love interest, there is no little to no direct conflict between them, no climax, not even a true plot. The novel, instead, is written in the way the experience is felt, as two compartmentalized perspectives in hindsight of the Guest’s departure.

A successful film director and writer, Sachin Kundalkar began writing Cobalt Blue at age twenty, around the time he began film school.  In his films and stories, a person’s urge to pursue her “true” nature is at odds with familial or societal expectations, yet inspired by someone or something that already embodies the free spirit manifested. The gravity of the characters’ inner lives carries the bulk of story’s momentum.

Even the reader’s experience of the external world depends on the characters who walk through it. In Cobalt Blue we know we are in India because rupees are exchanged, we know we are at the divide between the city and its outskirts because the characters shuttle back and forth, along the river because that’s where Tanay meets men for affairs, or inside the expansive brush beyond city limits because Anuj makes a career of trying to protect it. Buildings, roads, cars, and weather aren’t directly described as Tanay and the Guest ride a motorbike through the city, but you can still feel the warm air in the congested streets. Because direct description is rebuked in favor of emotive action, Kundalkar gets away with trying to, and succeeding in, showing us everything at once:

Then you began to sing, cutting loose. As we rode over the hill outside the city, then when we were within city limits, through the sounds of traffic, you sang. The honking of the cars would mix with your voice but you sang on, tapping out a rhythm on my shoulder. When we stopped at signals, you ignored the traffic policeman, the people laughing at us from cars. When they rolled up their windows, you smiled and went on singing. You only stopped when we got home. Then you hugged me and said, ‘Come up after dinner.”

Whistling, you took the stairs in four leaps and vanished into your room. I thought, at that moment, that I might have understood what you meant.

Every sentence (if not every few words) above says something about the moment at hand, while reflecting on who the characters are as people, and how that contrasts with the world around them. The entire book is written this way, in plainspoken recollections dwarfed by suggestive feeling. Tanay’s retelling of the Guest’s view of love and lust is one example. This might be interpreted as a transcendence beyond sexuality or Kundalakar’s view of the creative spirit or a description of the person Tanay was too afraid to be before he met the Guest or a depiction of who Anuj fundamentally is at heart, in any combination, or all of the above. The reader who sees nothing more than a man who gravitates toward the contents of a person’s character above all else will get along just fine if they do not notice the grander philosophy behind the words. All this is collapsed into this one short paragraph:

You stopped laughing and said, ‘Though it may sound absurd to you, no piece of clothing is more important than the others.’ Then you yawned and added, ‘They don’t get this. So I don’t get them. All the girls in college are like that. They scramble to look good. They want to be safe. Not my type. I like the people who are basically good at heart… totally free. You can dialogue with them. I can adjust I suppose. Not I won’t go to bed with someone unless he’s a friend. Being alone’s a habit now. But I suppose I could breach that too.

This is what the Guest sees in Anuj, who, in turn, begins to see potential in another side of herself. As Kundalkar will be Kundalkar, the way the author addresses situations like these speaks specifically to the individual’s personality, while faintly but firmly calling attention to image, gender, sexual, and cultural norms at large. As Tanay gradually frees himself of his carefully crafted image, Anuj rummages through her brother’s belongings to explore a standard of feminine beauty she once rejected outright:

The next morning, I was cleaning my toenails. Then I cleaned my ears. Tanay’s cupboard had all sorts of interesting stuff… ear buds, deodorants, cream with orange peel in it. I studied each one of the bottles and the pictures on them and then closed the door quickly. As I did so, I saw myself in the mirror. I took four steps back and looked again, carefully this time. There didn’t seem to be much wrong but I thought: I must take care of myself. Tanay was out. So I opened his cupboard again. I took out some bottles and tubes but this was rocket science. I couldn’t figure out what could be applied and where, how it was to be applied and to which part of the body, so I put everything back and shut the cupboard again. Never mind. I’m not that bad. I have what it takes in the proportions required. That will have to do. 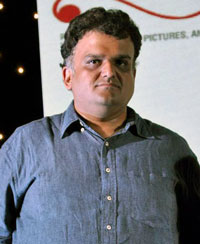 Anuj’s “I have what it takes” attitude is what saves her. The Guest embraces both siblings, gets both of them to drop their guard, abandons both of them without warning or justification, and doesn’t come back to explain himself or help either one of them pick up the pieces. It’s in the aftermath that Anuj, already a fiercely, emotionally independent woman who rarely looks outside herself to define her worth, proves to be more resilient than her brother.

Anuj is disheartened, but eventually sees the experience as an education. She now knows that the quality and intensity of interactions matter just as much as their endurance, a view that allows her to finally see and appreciate some of her family’s unspoken, selfless efforts, despite their spoken differences. She’s also reaffirmed the importance of owning one’s own direction, but no longer at the sake of building a foundation that gives her a personal sense of order and stability. In the end, she moves forward and is better off for the experience.

Tanay, a man who, up until he met the Guest, had made a habit of hiding behind what was expected of him, remains lost and distraught. Tanay had always looked for validation outside of himself, and the Guest’s presence, the Guest’s very way of life, is what gave him the courage to pursue who he was, rather than what he wanted to appear as to the rest of the world. Now that the Guest has left him exposed, naked, and staring in the mirror, he is forced to confront whether and how he will do the hard work of claiming himself as a person. He has to start from scratch.

Plot, situational friction, and climax take up so little space in this novel that revealing the end result of Tanay’s and Anuj’s journey almost feels like giving away too much of what’s left. Almost. In this book, character development isn’t just a significant part of the story. It is the story. The experience of this novel is thus more about the journey than the resolution.

Nokware Knight is a bibliophile who believes that one’s best days are made of good music, good food, good people, and new places. He hopes to one day travel as much as he reads and believes that a life well lived makes it hard to distinguish the difference between the details of a good journey and a great book.