CARDIO, LIGHTBULBS, AND A FUNERAL
by Rick Bailey

The day of the funeral I’m on the treadmill at the senior center.

A guy named Gordon I haven’t seen in a while stops next to me and points. I shake my head, What? He points again. So: I guess my limp is noticeable. I took a minor tumble on some stairs, more sprawl than fall. I’d rather not go into it right now. I’m listening to Ray Charles sing “Oh, What a Beautiful Morning” on my headset and watching Kelly Ripa and Michael Strahan on one of the four TVs hung on the wall. But Gordon stands there, smiling. I pause the Ray, pop out an earbud.

“Not much.” I dial down the speed and nod hello. “Where you been?”

Gordon is a junior senior. His hair is all white. He’s retired, not yet sixty, and reminds me of the Pillsbury Doughboy. The two years I’ve worked out at the senior center, I’ll see him three days a week every week for a stretch. Then he’ll be gone for weeks at a time. He is swift on the elliptical, then swiftly done and gone upstairs for coffee and networking. I glance back at the TV. It’s confetti time on Kelly and Michael. Three days a week I watch the silent confetti drop that happens on the show. It’s goofy, and everyone in the studio loves it. I guess I do too.

I tell him I took a little fall down some stairs. There’s a pause. I’m still walking; he’s standing by. “So,” I say. “A yacht.”

“There’s no such thing as a little fall,” he says.

“Not this time,” he says. “Up in the north channel. With Don.” Don is one of the senior seniors. He says he’s too old for exercise equipment. He wears big shoes and sleds a few laps around the tiny indoor track before stopping for a long coffee. He does a couple cruises a year. Gordon must be first mate.

“Every afternoon,” he says, “cocktail hour on the flying bridge, some cool jazz. It was sweet.”

“Must be some yacht.”

He considers his answer, smiles, and says, “Not that big.”

I start to say there’s no such thing as a small yacht, but think otherwise. I kind of want to get back to Ray Charles. I point to the TV and ask what he thinks of Kelly Ripa’s hair. It’s new, a Frenchy-looking bob. I don’t think she likes it. She touches it a lot.

Gordon glances at the TV, then back at me, like, Are you joking?

Later that morning I squeeze in a trip to Home Depot, looking for lightbulbs and super glue.

A few days ago my wife called to me from the basement. She said the stairway lights were out, one at the top, one at the bottom. That stairway goes down three steps to a landing, then makes a right turn to go down the rest of the way, thirteen steps in all, carpeted. I stood on a toppish step; she was downstairs. We flipped switches and talked. It was definitely dark. It turned out I didn’t know what step I was on. When I went to set my foot on the landing, it wasn’t quite there, and all of a sudden I went down in a pile; twisted and stretched muscle, bone, and fat.

“I’m okay,” I said to my wife. It was a tentative assessment, kind of a lie. It hurt like hell.

“Probably,” I told her. I just didn’t feel like moving yet.

Falls run in the family. In his old age my father stepped off a ladder and crashed onto the cement floor in the garage. He limped for a month. When she was seventy my mother-in-law misjudged a stair-step in our house, fell, and broke her ankle. One night my father-in-law woke up, walked the length of his house in the dark to the bathroom, the one he used over by the garage, the one next to the door to the basement. He opened the wrong door and stepped into the dark stairway. There was no landing to abbreviate his fall. He tumbled straight down all thirteen stairs. Somehow, he was not hurt.

Thirteen. That should tell us something.

For some time now whenever I carry a case of wine to the basement, I imagine myself slipping and falling. You put carpet on stairs, you’re tempting fate. In this imagined fall my arms fly up, I launch the case of wine into the air, bottles fly and fall, breaking and spilling. When I roll into the glassy, winey mess at the bottom of the stairs, I cut my throat. Cheers.

In the aisles of Home Depot I decide to look for the long lasting bulbs. Bulb technology, it turns out, is taking giant, if confusing, steps forward. Really, it’s a stampede. There’s incandescent, halogen, fluorescent, compact fluorescent, and LED. Check for lumens, Watts, Kelvin value, soft light, hard light, dimmables, warm-up time. Then there’s savings per year, calculated to the penny, and year life. It’s kind of like shopping for French wine. The light steward I eventually talk to holds out a package of bulbs, recommends LED.

He looks at me and smiles. “You’ll probably never have to buy bulbs again.” It’s an innocent remark. In my lifetime, he means. He sees something in my facial expression, intimations of my imminent demise, and offers a sheepish apology.

On the way to the funeral my wife says, “They’re not supposed to die before us.”

He was fifty. He was big. He had a mountain-man beard and a soft voice, he had light in his eyes and a smile that made you want to love him. At the funeral we stand in the church vestibule for half an hour, a visitation that begins in soft murmuring and mournful glances, and by the end rises to a din of conversation and laughter so loud the funeral director can’t hush us up and herd us into the church. There’s a balm in that din, an affirmation. But still, the man is gone.

We file in, find seats in pews, and wait. Whoever made this church understood light. The floor and walls and ceiling are all white. There’s stained glass, but it’s stained glass lite. The afternoon sunlight pouring in has a kind of echo. Maybe it helps. While we wait, the pianist plays in minor keys, slowly, a lot of sostenuto. Maybe that helps too. I remark to my wife: Above the altar, the wheel chandelier hanging from the ceiling. When she looks, I whisper, A little lower, it could be a pot rack. She wags a finger: Keep quiet. Way off to the left, behind the organ, is a huge set of drums, worthy of Ginger Baker, and a pile of amplifiers, for playing God rock. The horror.

Then the pianist shifts to a major key. We stand.

Then come the family, the casket; words.

Outside afterward, we stand facing the hearse, arguably the worst time. One church bell begins to toll. I hope they’re doing it on purpose. “If a clod be washed away by the sea,” I think. We are the less.

Lying in bed that night I find my wife’s hand and remember: super glue. It’s for a ceramic lemon that she bought in Sicily and that I broke a few weeks ago. I plan to fix it. Two or three pieces, clean breakage. It will be almost good as new. We lie there, drifting toward sleep. Drifting, I think about lemons and glue, and carpet on a well-lit stairway, about my limp to wellness on the treadmill, and a yacht anchored in the north channel, floating in the dark, a couple staterooms lit by a few tiny lights, and people having drinks, feeling lucky. 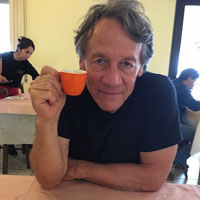 Rick Bailey writes about family, food, travel, current events, what he reads and what he remembers. The University of Nebraska Press will publish a collection of his essays, American English, Italian Chocolate in summer 2017. He and his wife divide their time between Michigan and the Republic of San Marino.