A WORLD BETWEEN
by Emily Hashimoto
Feminist Press, 440 pages
reviewed by Ashira Shirali 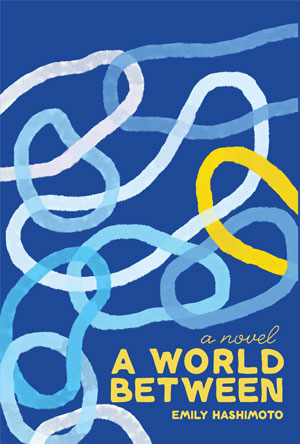 Let’s be honest—the chances of walking into a bookstore and finding a literary lesbian romance are low. You’re more likely to find an entire cookbook consisting of sourdough recipes. If you want the book to feature characters of color, your odds sink even lower. Emily Hashimoto’s debut novel promises to fill this lacuna. A World Between (Feminist Press, September 2020) follows the relationship between two women of color, Leena and Eleanor, through college and adulthood. The novel alternates between Leena’s and Eleanor’s perspectives, revealing the yearnings and anxieties of each as they grow apart and together.

There is much to marvel at in this debut. Hashimoto is adept at plotting. She pulls Leena and Eleanor apart with narrative developments that are both unexpected and believable. The novel heightens tension as we long for the two’s reunion despite circumstances, family expectations, and their own struggles. Eleanor and Leena’s conflicts are heartbreakingly realistic. Their fights remind us that in real life there are no villains or heroes, just two people whose earnest feelings clash. Hashimoto deploys details masterfully. She can bring characters to life with just a handful of words. When Leena cries in her mother’s car, she turns away because her mother “couldn’t stomach emotions of this magnitude.” The novel’s dialogue captures the rhythms of young people’s conversations, both the beat and the crescendos.

A World Between’s greatest triumph is capturing the shape, color, and texture of attraction between two women.

Despite these strengths, Leena and Eleanor’s honest, multi-stranded story is let down by the novel’s prose. Hashimoto’s similes fall flat as often as they succeed, and she pushes metaphors too hard. After describing how Leena responds to Eleanor’s body as if calculating an equation, Hashimoto writes, “If two trains were headed to Boston at one hundred miles per hour, how fast would Eleanor come?” There are awkward phrases which aspire to the literary (“she took a bite of her tongue”), and sometimes the writing elicits pure confusion. The novel could easily lose a hundred pages. In other places, however, the words delight—“It was quiet for a long time, dust settling on the ellipses of the moment.”

A World Between’s greatest triumph is capturing the shape, color, and texture of attraction between two women. Before Leena and Eleanor’s first kiss, Hashimoto writes, “Eleanor applied one hand to the bed between them.” ‘Applied’ beautifully conveys the trembling excitement of reaching for a first kiss. When Leena sees Eleanor on the street years after college, she thinks, “Her sweet face, her genuine smile. Invading her today.” The diction reveals Leena’s apprehension at seeing Eleanor while out with her boyfriend, and the powerful effect Eleanor still has on her. Distilling the intimacy between women in all its rawness and tenderness is Hashimoto’s strength. 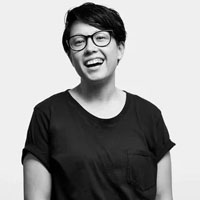 The novel’s attempts to reflect America’s diversity and the characters’ progressivism feel as heavy-handed as its metaphors. Although the novel does the crucial literary (and, indeed, human) work of telling the stories of people of color, immigrants, Jews, and other marginalized groups, by the end of the novel, this diversity feels contrived and unrealistic. Even the few straight White characters are ‘diversified’ by being in interracial relationships. Leena and Eleanor have identical political beliefs. Without specific and meaningful reasons behind these beliefs, they strike hollow and simplistic. Both Leena and Eleanor’s ambition in college is the platitude “[to] make a difference.” The two protagonists experience similar disillusionment when they realize their jobs will involve listening to bosses, not heroic acts of justice. Eleanor quits her job at a non-profit, telling her boss that she’s “sick of being told what to do and on your timeline.” These epiphanies would be trite by themselves, but they also seem unrealistic as they occur in the characters’ late twenties.

Eleanor and Leena’s intellectual myopia produces an immaturity that tests the believability of their characters. When Leena’s grandmother praises the education she received at a British school in India, Eleanor thinks Leena’s grandmother “seemed to be praising British colonialism.” She looks around for “someone to explain what the fuck is happening.” This reaction is better suited to a teenager who just learned about British colonialism in India, not an adult used to living in a complex world. When Leena finds out that a friend’s parents were deported, she thinks, “He seemed…okay. How was that possible?”

A World Between is importantly frank about sex between women. Their sex life is neither pornographized nor obscured, the two poles of how sex between women is depicted in mainstream media and culture.

Although Hashimoto’s diversity efforts feel manufactured, like a wooden puppet, her depictions of sex have the fluidity and heat of human bodies. The desire Eleanor and Leena feel for each other is tangible and all-consuming. A World Between is importantly frank about sex between women. Their sex life is neither pornographized nor obscured, the two poles of how sex between women is depicted in mainstream media and culture. When Eleanor and Leena dance together early in the novel, Hashimoto writes, “Up until this second, her interest in Leena was physical, no doubt, but she had been fascinated by the whole of her…With their bodies intertwined, all of that faded into the background…She wanted to fuck her.”

In A World Between, Hashimoto delivers a love story that portrays the depth of romantic attraction that can exist between women while escaping the trappings of cliché. Leena and Eleanor share moments suffused with love, but their relationship faces real-life challenges. There’s no neat ending in a shiny bow. Though hindered by uneven prose, A World Between is a moving portrait of the tensions, joys, and warmth that characterize a relationship between two women. 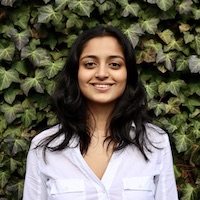 Ashira Shirali is from Gurgaon, India. Her stories have been shortlisted for the HG Wells Short Story Competition’s junior prize, The Adroit Prize for Prose, and other contests. Her work has been published in Cosmonauts Avenue, Hobart online, and elsewhere. She is a sophomore at Princeton University, where she studies English and Creative Writing.