NOW IN ELSEWHERE
A Now for MENAM: A Calendar That Curates Time
by Orkan Telhan

The Middle East. North Africa. The Mediterranean. Asia Minor and the Levant. These refer to inexact geographies. It is hard to tell where each begins and ends. As names, they may take on different meanings when they refer to people, languages, belief systems, and politics, all of which constantly negotiate their identities with respect to one another. As places, they may bring together a series of disjointed lands unified as an imaginary cultural construct, yet whose presence lives everywhere, whose lands have produced many diasporas around the globe. Today, someone from Little Syria, New York, uses the same recipe for hummus that a grandmother uses in Syria. And it tastes different; taste belongs neither here nor there, and changes every moment. 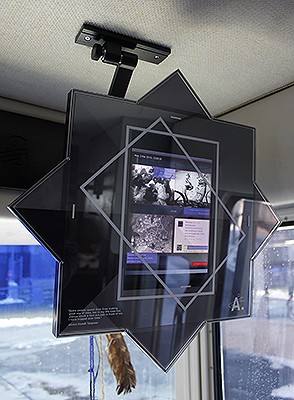 It is often an oriental gaze that renders these uneasy, tenuous connections. This is a gaze that comes both from the desire to belong to a place and the fear of its possibility. Thus the Middle East, North Africa, or the Mediterranean always exist as mediated elsewheres where only others can belong. Or where we belong as others.

Making sense of all of this today is an art. Is opinion really in the eyes of the beholder? What is there to look at when our interpretation will always be skewed by what is selectively mediated for us? Where or whom do we belong if opinions are already others’?

“A Now for MENAM” is an artwork that responds to these questions. It reflects on our habits of looking and making meaning out of what is thrown at us by media. It proposes a different kind of interface—perhaps a less complacent window or mirror—that tries to present the other in its fluidity; with enough room for fact and fiction.

The artwork is designed as a real-time calendar that brings together different moments from history to curate a “now”—a minute-long media excerpt collected from online sources that broadcast content from or about the Middle East, North Africa, and the Mediterranean (MENAM). Its algorithm queries different sites and brings together texts, videos, facts and historical trivia that are related to contemporary issues based on the current month. For instance, in March 2015, we see news about the upcoming anniversary of the Armenian genocide, the current death toll of immigrants crossing the Mediterranean, and watch an excerpt from Jean Genet’s Un Chant d’Amour—the only film by the French writer who now rests in a Spanish cemetery, in Laresh, Morocco. 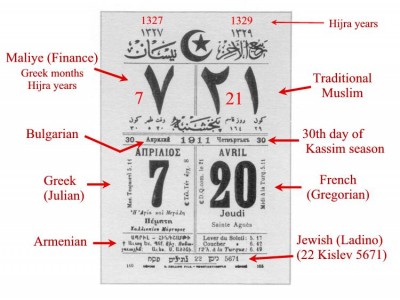 Almanach was published in the late 19th and early 20th centuries by the Ottomans to address the needs of the minorities living in the Levant region, which we today identify as the area that spans Cyprus, Israel, Palestine, Jordan, Lebanon, Syria, and Egypt. It featured the current dates in Turkish, Greek, French, Bulgarian, Armenian, and Ladino (Judeo-Spanish) with respect to the specifics of the timekeeping practices used in these geographies.

Saatli Maarif Takvimi also dates back to the early 1900s but is still in use today in Turkey. It features both the Gregorian and the Hijri calendar, which is mainly used to indicate the daily prayer times for Muslims based on moon cycles. In addition to timekeeping, the educational calendar also includes daily items such as weather predictions, recipes, suggested names for newborns, jokes and trivia about past events that happened on that day. It works like a serial publication written by an anonymous author who tells you what you need to know for the day.

As a mobile application, “A Now for MENAM” runs in real time yet pays homage to these printed formats, both in form and content. The layout is broken down into sections that organize the information in quadrants. Every minute we see content based on a new topic related to one of the countries in the region—immigrants in Libya, austerity measures in Greece, the banning of Berber names for Moroccan babies. A video feature on the topic appears on the upper right corner of the page, matched with a looping gif animation, which counters both its speed and message with humor or satire. On the lower left, we see a visualization of facts or real-time information, such as stock exchange tickers or real-time widgets reporting on currencies and markets of MENAM, while on the lower right there is a Twitter feed where everyone can contribute to the current topic with a selection of hash tags. 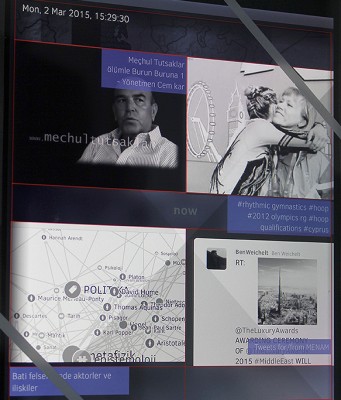 A Now for MENAM, detail. Click for higher resolution image.

“A Now for MENAM” curates a running critique on issues related to current times. The four-quadrant format presents multiple perspectives on the same topic by showing adversarial opinions in the same frame, with information collected from different outlets such as personal blogs, mainstream media, and scientific journals. In the age of social media, this calendar does not presume to feature the “right” point of view; rather, it tells a story from the perspective of different tellers. As with any narrative, the result is always subjective and incomplete. Every minute-long “now” is a possibility negotiated between an algorithmic selection and a series of curatorial decisions programmed by the artist.

The calendar can be accessed anywhere in the world, 24/7. However, it is primarily designed to be a travel companion—a temporal navigator—that will find its place next to the GPS in our cars. Currently commissioned by the CULTURUNNERS Project and the Armory Show 2015, the calendar will travel across the United States and visit different cities inside an RV. During the calendar’s trip, its algorithm will detect the current location of the RV and pull its content accordingly, from sites and sources created by those who identify with MENAM in the visited places.

Like all narratives, the cultural constructs we call the Middle East, North Africa, and the Mediterranean will always unfold in fragmented ways. The “Now” calendar, as a work of art comprising a series of curated moments, will never render a clear coherent image of the land or the other but rather help us reimagine a different MENAM every time we look at it.

For an example page of the calendar, visit here: orkantelhan.info/now_for_menam_single. For more information about the project, visit culturunners.com/projects/a-now-for-menam. 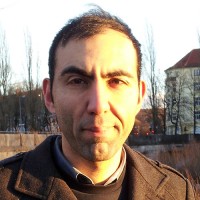 Orkan Telhan is an interdisciplinary artist, designer, and researcher whose investigations focus on the design of interrogative objects, interfaces, and media, engaging with critical issues in social, cultural, and environmental responsibility. Telhan is Assistant Professor of Fine Arts–Emerging Design Practices at the University of Pennsylvania’s School of Design. He was part of the Sociable Media Group at the MIT Media Laboratory and the Mobile Experience Lab at the MIT Design Laboratory. Telhan’s individual and collaborative work has been exhibited in venues including the 13th Istanbul Biennial, 1st Istanbul Design Biennial, Ars Electronica, ISEA, LABoral, Archilab, Architectural Association, the Architectural League of New York, MIT Museum, Museum of Contemporary Art Detroit, and the New Museum of Contemporary Art, New York.