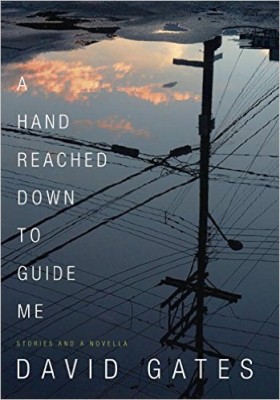 A HAND REACHED DOWN TO GUIDE ME
by David Gates
Alfred A. Knopf, 336 pages

It’s December and you may be looking for a holiday read (with a bang).

A Hand Reached Down to Guide Me is a short story collection that offers a rare pleasure: the possibility of reading it cover to cover, leaping from one story to the next.

Some readers, including this one, may want to protest the gallery of rogue characters David Gates presents in this new collection perhaps enough to wonder who Gates hangs out with. I’m reminded of the scene from the film Ocean’s 11 when Julia Roberts’ character says to George Clooney, who plays Danny Ocean, “Your problem is you’ve met too many people like you.” Some of these characters’ habits and inclinations, reflections and bitter asides, are just this side of depraved (or perhaps for some people, the other side of depraved). Indeed, the people in Gates’ stories can wear a bit, with their biting sarcasm and world-weariness.

Yet there is no denying the sure hand behind these stories, many of which appeared in The New Yorker and the Paris Review. Gates knows his characters so well that the descriptions and stories feel chiseled like sculpture. In the case of Lily, the protagonist of the story “A Place Where Nothing Ever Happens,” one is tempted to think Gates has compiled a fictitious Netflix account for her. Clearly he’s had the fortune or misfortune of knowing exactly the kind of families who send their children to Brearley, Dalton, and other New York City private schools. The kind of families who know people called Portia and who can be found “doing coke…in the bathroom at Portia’s wedding.” Lily lives in Brooklyn Heights, and casually mentions at one point sharing “a taxi back to Brooklyn with Portia’s married boyfriend” and then sharing some illicit affection, which sets off a torrent of emails from the boyfriend.

While much attention has been paid to Gates’ male protagonists, in this collection and other works, the author has a special affinity for sketching modern female characters. And Lily is perhaps a prototypical example. She is jaded, yes, and cynical and at a very tender age has already acquired enough vices to make the story nearly feel transgressive for the reader who is merely reading. While house-sitting for one of these tony New York-area families (in a suburban nowhere-place “where nothing ever happens,” as the title goes), she finds endless ways to deviate, and self-sabotage. And yet while Gates has been criticized for his somewhat misogynistic depiction of women, Lily is the embodiment of many modern women who are as self-centered as men can be, and who abuse alcohol and drugs, and treat sex like a bodily function rather than a guilty pleasure/obligation/sacred act to dance around. 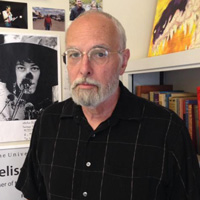 Gates, for his part, appears never to have believed for a second those feminists who suggested a world run by women would be one without war (it may or may not be true; but such a cloyingly patronizing attitude reduces women’s complexity.) And understandably so, given that the British newspaper, the Independent, has called Gates “a master of messy awfulness.” He’s perhaps best-known as the author of the 1991 novel Jernigan, which The New York Times called “astonishing” and which was a Pulitzer Prize finalist. He’s been compared to Samuel Beckett, which is appropriate since Gates has studied Beckett extensively, having written a dissertation on him. Gates, himself, in an interview with The Iowa Review, has cited inspirations as diverse as John Cheever to Raymond Carver to Ann Beattie (to whom he was married at one point).

His other works include the 1998 novel Preston Falls and the 1999 short story collection The Wonders of the Invisible World, both of which were nominated for National Book Critics Circle awards.

Readers have seen some of these awful characters before, and not just in Gates’ work. As writer Ross Simonini of The Believer has said, Gates’ stock characters are people who “in reality would be considered rude, intellectually arrogant and aggressively opinionated.” But readers like them! And not a lot here is old hat. That’s partially because Gates, in this new collection, seems to suggest all of us humans are flawed individuals who will paw our way toward our ultimate destinies, regardless of how virtuous or unvirtuous – or pedigreed (or degreed) for that matter – our lives may be. Given these characters and the deeply-read author behind them, one can easily imagine the message here is: ‘Abandon All Hope Ye Who Enter Here.’ Perhaps, with the added glee of sticking that message especially to accomplished, well-educated literary types and aging academics who throw out references to Milton and the composer Franz Liszt, of which the collection abounds. But perhaps there is some hope, some nuance, some novelty in knowing that the mighty fall, and the unmighty, too, in sometimes surprising ways.

Indeed, there is little that is conventional about his approach. Gates likes to flip the script, as they say, or manipulate our expectations. In the story “Desecrators,” we learn almost immediately that the main character, Cal, a journalist living in New York City, is cheating on his wife. In fact, the opening scenes show him saying goodbye to his daughter, Cammy (that dog!), renting a convertible at the Hertz concession and picking up his paramour, who’d told her boyfriend she had an out-of-town reporting gig.

As he arrives in front of her building, Cal looks Margaret over and says, “We like the nips.” She responds by grabbing “a handful of t-shirt on each side” and after pulling her shirt tighter, she says, “Externals.” A few lines later, we read, “’You’re completely evil,’” she said. ‘I want your cock in my mouth.’” Cal replies, “Here and now….or just on principle?” Well then! This not a short story that will give rise to a new franchise of “The Thin Man.”

But things are not as they appear. A few pages into the story, as Cal and Margaret are enjoying their weekend getaway at a secluded cabin, he calls home to talk to his school-age daughter. His wife answers, and when she passes the phone to their daughter, Cal says, “No problems, right? I know you can’t really talk.” Wait a minute. What’s going on here? A page later, Gates tells us that after Cal married Fran, he “quit the Ph.D. program and stopped playing music, like some Jane Austen lady who’d hooked a husband and no longer needed her accomplishments.” Then we find out Cal took a job as an editor of a weekly paper when Cammy was three years old, shortly before Fran had her “first rehab” stint. On first read, the mind reels at the word ‘rehab.” On second read, one notices the modifier ‘first.’ That’s one way to flip the script.

Cal is not by any means the only male protagonist in Gates’ stories or the only appealing one, but his women characters are the ones that stand out. This is clear from the first story in the collection, which is a fast-paced novella that clocks in at 90 pages. Here Gates gives us a decadent tour of a second marriage between two people who know what they are doing, and what they are doing is living gluttonous, hedonistic lives. The story is told from the perspective of a middling, part-time journalist who upon meeting an older, eccentric, misogynistic artist she’s covering for a story quickly decides to ditch her nice husband and embark on an affair. Needless to say, nearly everyone in the novella is a rogue, women included, of course. The result is writing that is wicked and witty. The novella might represent Gates at the heights of his storytelling capabilities, and is a perfect prelude to the rest of the collection.

Jeanne Bonner is a freelance writer and editor, and a candidate for an M.F.A. in Fiction from Bennington College. A nonfiction essay she wrote called “I Come Bearing Gifts, Amore Mio,” was awarded Honorable Mention by Writer’s Digest as part of its annual writing contest this year. Another essay, on the importance of work, will be published in an anthology next year by the HerStories Project. Her poetry and nonfiction travel essays have appeared in Mothers Always Write and Afar.com, respectively. She lives in Atlanta, where until last year she was an NPR station reporter.