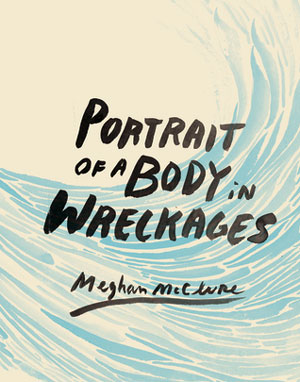 PORTRAIT OF A BODY IN WRECKAGES
by Meghan McClure
Newfound, 43 pages
reviewed by Claire Oleson

Excellent writing is often lauded for its ability to transport and disembody the reader, to enrapture so completely that its audience floats along the sentence and forgets their place in the room. Meghan McClure’s Portrait of a Body in Wreckages does not do this, instead, much of its excellence is found in its proficiency to embody the reader, to address them in their own physicality, and move along the level of the cell as well as the sentence. Composed in blocks of poetic prose, this work explores the speaker’s relationship with their body, its limits and its multitudes, its wholeness and breakages, and its existence within both anatomy and language.

Oscillating in focus and tone, much of Portrait of a Body in Wreckages educates, telling us “Your right lung is bigger than your left” and “Ounce for ounce, bone is stronger than steel” These quick and fascinating statements begin inside the medical and clinical, categorizing, and analyzing of anatomy which demands a distance from the body to know (it is very difficult to test for yourself, on an inhale, which lung feels larger). But McClure does not keep this distance for long. She carefully bestows her readers with knowledge and then makes this knowledge personal. Soon after presenting us with the anatomy of lungs and bones, McClure says of the same body with bones stronger than steel, “It breaks so easily. Give me your arm- I will show you. A small skiff off a rocky shore.” Here, we encounter lines that are at once direct and indirect, lines which might call a reader into their arm in a sudden revulsion, an expectation of breakage, but which also cast us off into an image of the sea shortly after. McClure’s use of the second-person in this instance, and throughout the book, reminds the reader of their body and how they can receive sensation even when untouched, even just from text. The last sentence of this block, “A small skiff off a rocky shore.” takes us back out of the body, past skin and past the alarm of the previous sentence, into an image of wreckage which McClure revisits and enriches throughout her work. This skillful turn from the intimacy of direct injury to the openly-connected picture of flotsam allows the reader both relief and space for fascination.

Portrait of a Body in Wreckages succeeds in accomplishing the opposite of what so much of great literature is hailed for; instead of taking us into a far and previously unimagined world or sensation, its skill lies instead in bringing us home.

As one moves through Portrait of a Body in Wreckages so too are they invited to move through themselves, to remember the possibilities of their perpetual yet invisible interior. McClure explores this interiority when she writes: “the way cells divide and elbow out until they become the word cancer and leave room for nothing else.” Cells are given their own bodies, they have elbows, they have intention, they contain the ability to be and make words of themselves as realized when they “become the word cancer” a phrase which again widens the lens of the reading, nudging the reader to consider how this body of work functions as a text as well as the ways in which the reader’s own body might work inside of these words. There is a delicate coexistence being built here, one which practically demands a physical involvement in this book, and invites a literary involvement with the body. 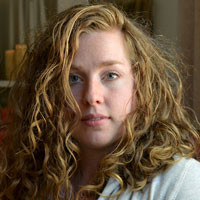 In a discussion of what words belong to pain towards the end of the book, McClure explains how the word “shatter” doesn’t fit well with how the body actually breaks, suggesting “For injury, instead, let’s try: fracture, bend, splinter, crack, chip, scratch, slit, cut, rip, tear, gash, rupture, split, score, nick, break, wreck.” It as if we are being welcomed into the creation of a new and highly intentional lexicon for what can go wrong in what we inhabit, in what we are. There are, for McClure, right and wrong words for how the body can go to wrong ends, for how and where it is wrecked. Interested not only in being correct in both its personal and medical terminology, McClure also presents the body as “an instrument of empathy” something which has the capacity to feel, to personalize and bring home, actions, touches, injuries, and words which happen outside of itself and its cells. This capacity, and this notion that the body is something inherently empathetic with other bodies, gives Portrait of a Body in Wreckages its talent to touch without contact, to explore the unlit and unfeeling internal worlds of its audience (both emotional and biological) without employing a scalpel.

Portrait of a Body in Wreckages opens with: “The body is the first landscape.” immediately tossing the reader into the body as a place inhabited and explorable. This initial image and definition of the body illuminates as simultaneously known and the unknown, this bodily landscape being the first of something we have as well as too sprawling a thing to be comprehended in a single glance. Much of the writing that follows builds off of this establishing understanding, providing its reader with a landscape, though one which is shifting and pulsing, one which is perhaps more comparable to water than solid ground.

Written in fragments, McClure has given us glimpses of the body in pain, in exaltation, in dualities, and in pieces. She shows us how the body might be presented “Only in wreckages, because to tell this as a coherent thing would be to lie about what the body is.” Devoid of a single sustained narrative, plot, or perspective, autobiographical but not autobiography alone, and poetic but unlineated, Portrait of a Body in Wreckages has wrecked itself to become itself, to mirror the body and to supply us with a deep and reflective surface in which to see both an other and ourselves. Set out against the white of a hospital bed or the white of the page, we see bodies in surgery and bodies in childhood overlapping and coalescing into the body of an adult woman who tours us through our own wholeness and breakings. This work is embodied in itself and asks to be not simply read, but participated in, to be felt through and ached across. Portrait of a Body in Wreckages succeeds in accomplishing the opposite of what so much of great literature is hailed for; instead of taking us into a far and previously unimagined world or sensation, its skill lies instead in bringing us home.