UMBRELLAS COULD HAVE BRAINS
Paintings by Serge Lecomte

The real world for me is a mix of images where two realities or more cross. Take two known objects and connect them in some other way. As a teen I saw the paintings by Hieronymus Bosch and was taken by the surreal world he envisioned. The world was never the same for me after that. Images were no longer meant to stagnate in their inert state. Rocks weren’t simply rocks. They could become loaves of bread. And fish could turn into young maidens. Leaves on a tree could turn into birds and vice versa. And umbrellas could have brains. After all, they have to open and close.

Words have always inspired images to me. I began my career as a poet and novelist. Then one day, I quit writing because I thought painting would be a better way of expressing ideas. But the words I paint become transformed into images that may not represent a definition for the words. It’s all about connections in my mind, although I hope I can connect with my viewer.

I love loud colors and adore the Fauvists because of their use of bright and pure (unmixed) colors. Color, shape and space are very important for me.

I don’t see myself repeating what others have done. I don’t believe in smearing paint and calling it abstract art. That movement is gone. I paint because I am addicted to painting and enjoy the creative process, even in gardening or making jam. Ever had papaya preserves with walnuts? Pretty surreal. Enjoy. 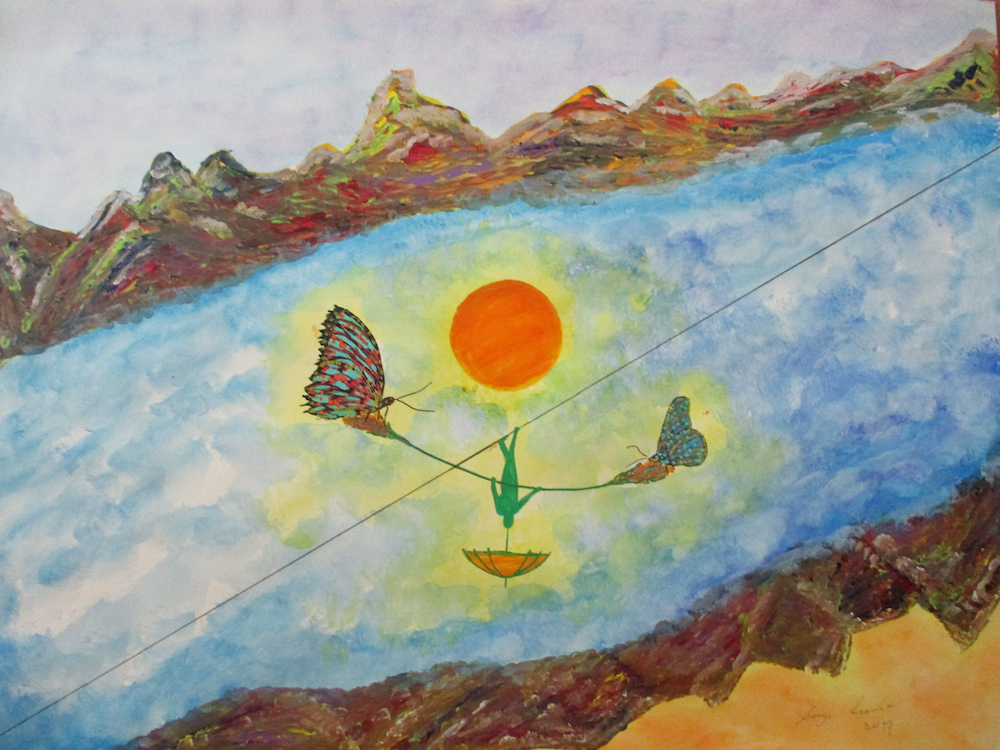 Balancing Act
I recalled Charlie Chaplin in the movie The Circus where he was on a high wire while several monkeys are jumping on him. I imagined him flipping upside down. The picture stuck in my mind. And so, I painted a man walking upside down helped in the air by butterflies. 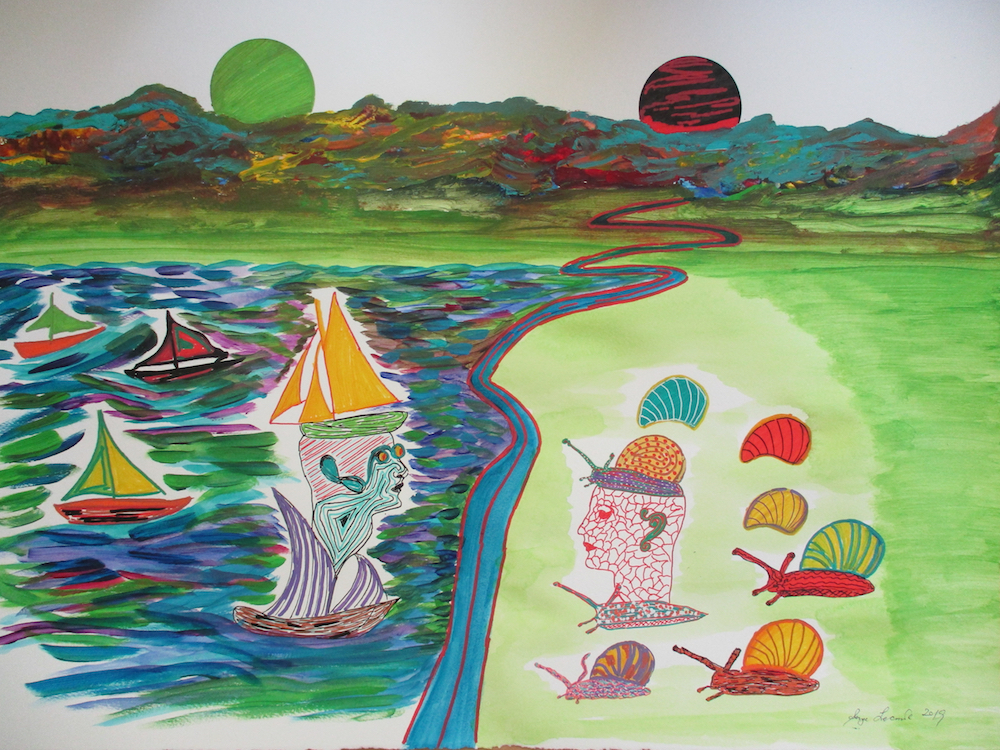 Barrier
This picture is the story of war about to begin. Barriers, walls, frontiers prevent people from  coming together. 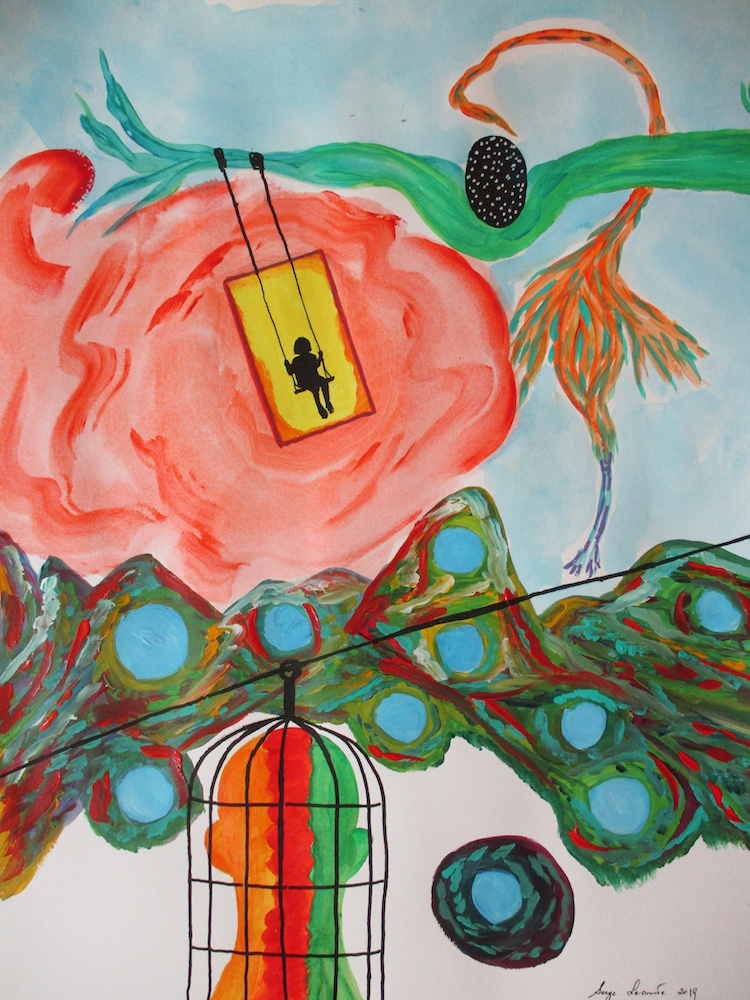 Free as a Bird
Everything in this painting is free, except the man’s head in the cage. But I’m sure he thinks he’s as free as a bird in spite of the cage. 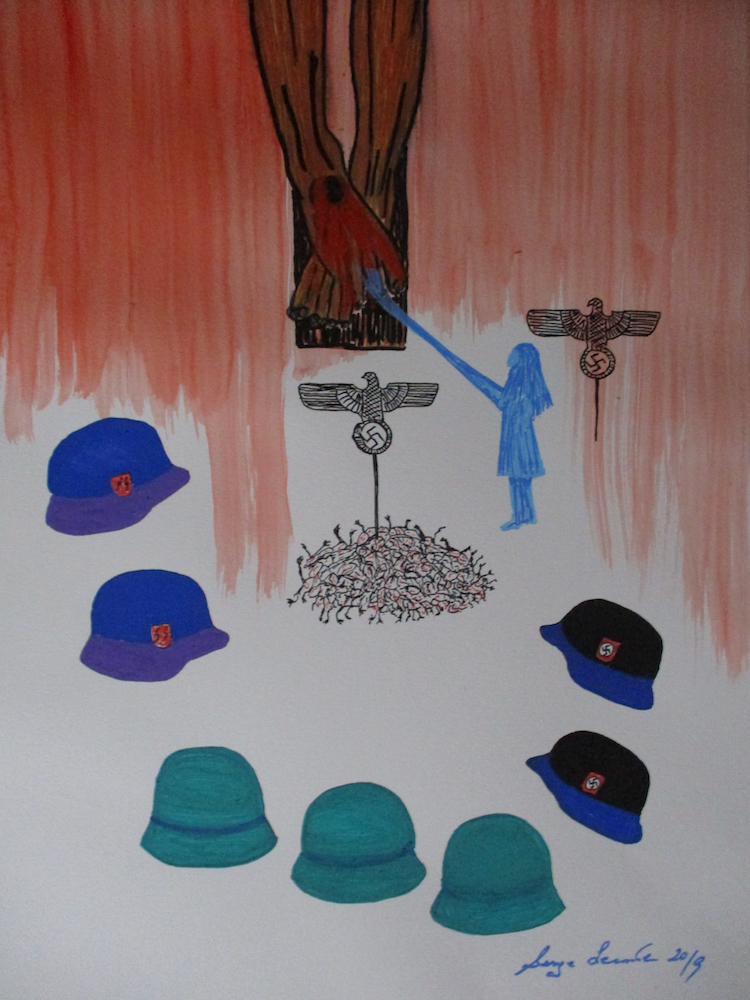 Gott mit uns (God is on our side)
It was originally inspired by a WWI belt buckle I saw when I met a German soldier in Philadelphia in 1960. The inscription “Gott mit uns” also appears on Nazi belt buckles. The words make no sense to me, but neither did the Crusades. And then there’s Mark Twain’s short story, “The War Prayer.”   My painting came into being from words.

Nor do I understand you, but meanwhile,
open for me the cage from which I want to escape.
Little little man, I loved you half an hour,
don’t ask me again. 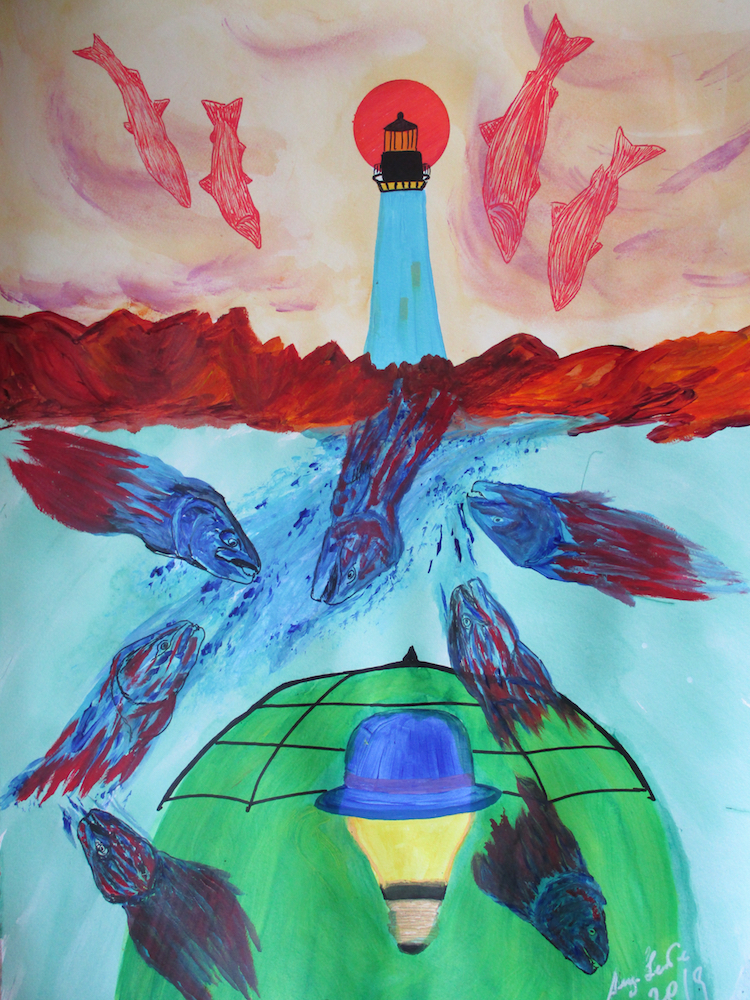 It’s Raining Salmon
Having lived in Alaska for almost 40 years, salmon was on my table on a daily basis. The image recurs in my works in different fashions, sometimes as a head on a human body. Painting salmon in different poses is as if I were changing recipes. In Haruki Murakami’s novel Kafka on the Shore there is a downpour of fish. 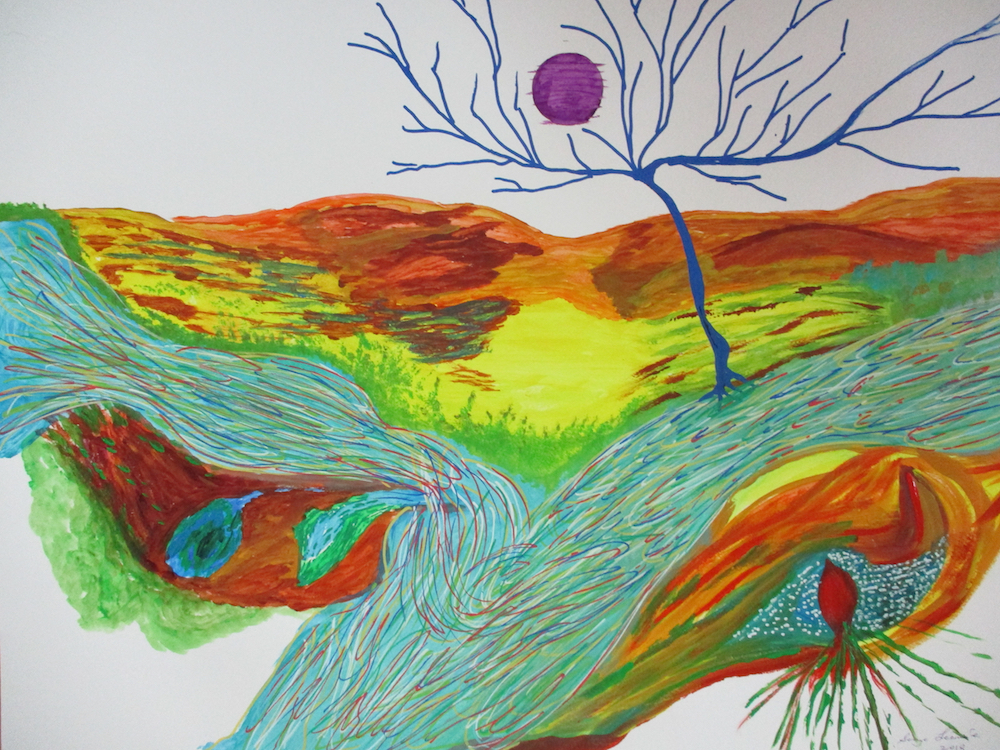 Salt of the Earth
This picture was inspired by Toni Morisson’s The Beloved in which Sethe murders her child so that it would not know slavery. I embedded the face on the shore of the river. 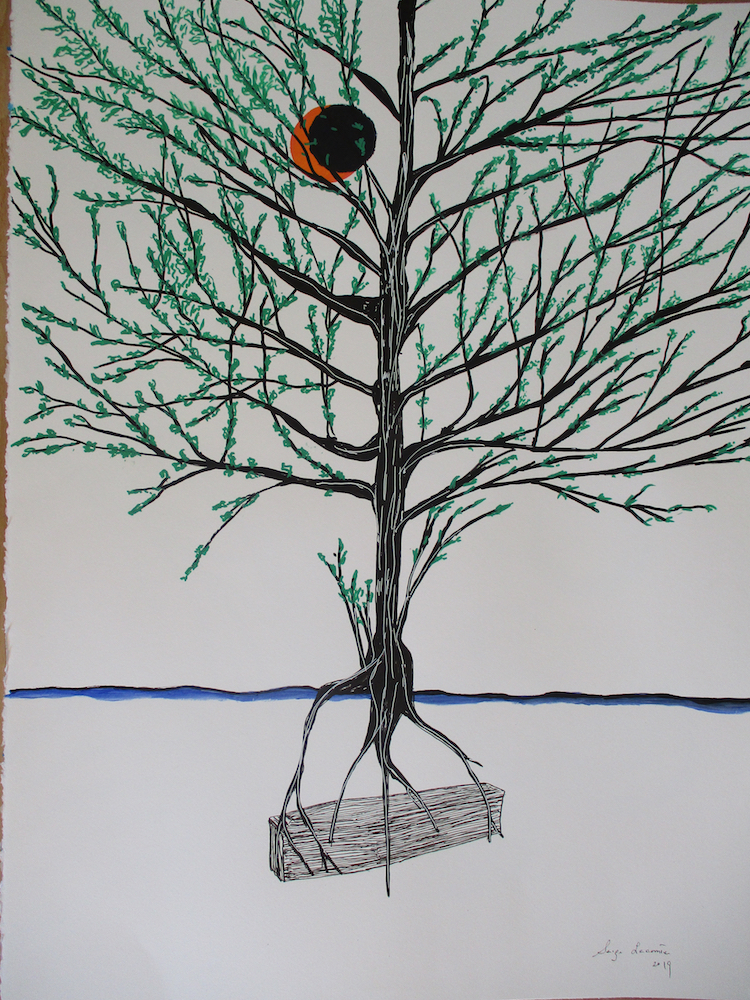 The Waiting Room
The coffin is a waiting room, perhaps a place where the soul will one day awaken or not. In spite of death as a theme, there is also life in the tree fed by our decay. I remember Madame Bovary in which Lestiboudois, the cemetery caretaker, plants potatoes in the graveyard. Nothing like having fresh compost to nourish the spuds.

Zizi et Kiki au Café (Cute names for male and female sexual appendages in French)
First date over coffee isn’t about a cup of Java. Zizi obviously has the hots for Kiki, but her mouth is a Venus flytrap. I leave that one to your imagination. 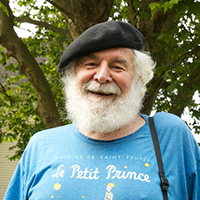 I was born in Belgium. We came to the States where I spent my teens in South Philly. I went to Wagner Jr. High and attended Olney and Roxborough High Schools.  I then moved to Brooklyn. After graduating from Tilden High School I worked for New York Life Insurance Company, then joined the Medical Corps in the Air Force and was sent to Selma, AL, during the Civil Rights Movement.  There I was a crew member on helicopter rescue.  I earned a BA in Russian Studies from the University of Alabama and an MA and PhD from Vanderbilt University in Russian Literature with a minor in French Literature. I worked as a Green Beret language instructor at Fort Bragg, NC, from 1975-78. In 1988 I earned a BA from the University of Alaska Fairbanks in Spanish Literature and went on to work as a language teacher at the University of Alaska (1978-1997).

I was the poetry editor for Paper Radio for several years. I have worked as a house builder, pipe-fitter, orderly in a hospital, gardener, landscaper, driller for an assaying company, bartender in one of Fairbanks’ worst bars, and other jobs. I resided on the Kenai Peninsula, Alaska for 15 years and recently moved to Bellingham, WA.