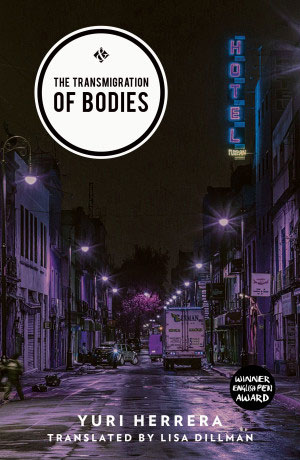 THE TRANSMIGRATION OF BODIES
by Yuri Herrera
translated by Lisa Dillman
And Other Stories Publishing, 101 pages

There’s something about summer heat that pounds the world into a flat, dusty slab. Your mouth dries out, and your brain loses its moisture and turns to lizardy thoughts instead. Compassion? It’s in short supply. “For now, these hot days, is the mad blood stirring,” Shakespeare said. Yuri Herrera’s short novel The Transmigration of Bodies is all blood and madness, a noir fantasy set against a hard-baked Mexican landscape.

Even the air, in Herrera’s world, has been smothered, “almost insubordinate with odors: because there was no smoke, the scent of jacaranda could be clearly discerned among the miasmas that had been blown uphill like never before, in the tropical storm that had skewiffed the wind like never before—and so the smells, rather than fading, fermented.”

As if that isn’t bad enough, everyone’s dying. A mosquito-borne epidemic, passed from bite to blood to breath to skin, is killing people left and right. To the Redeemer, “a brickshitting ambulance-chaser carving out a career in fifth-rate courts,” it’s all business as usual. He’s a sweaty loser, renting a room in a run-down hotel, making his living by fixing bribes for the local crime families. You want something done, you call the Redeemer. And even in the hot season, where mosquitoes feed out of puddles of congealing, black blood, he’s got a job to do. 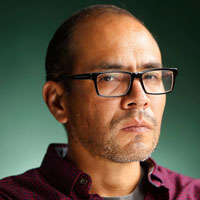 The Transmigration of Bodies is a modern Romeo and Juliet, heavy on the tragedy and rich with lurid details. Herrera packs an astonishing amount of life into its 100 pages. His first novel, Signs Preceding the End of the World, cracked several best-of lists in 2015, and no doubt Transmigration is on the same road. Lisa Dillman’s translation spits and sparkles, preserving the story’s playfulness as well as its deep dark places.

This Mexico is the stuff of Tarantino movies: the story ranges from mescal-soaked flophouses to “a big old tomcathouse for women who earned their own dough: disco ball on the ceiling, tiger-skin sofas, and strippers with huge muscles and tiny G-strings, ready to romp for the right price.” Although it trots out the genre’s same comfortable tropes—from anemic students and vengeful dealers to a luscious, easy-to-bite blonde—Herrera’s novel adds enough zing to keep the pages turning.

Above all, The Transmigration of Bodies has a refreshing self-awareness. As the Redeemer fumbles his way through one worst-case scenario after another, Herrera wants the reader to laugh—at miserable human ineptitude. No existential crisis or identity questioning here. If anything, characters seem to struggle with too much self-knowledge—a sense of their own fate. Bearing down on all of it, the heat, oppressive and galling at the same time, in constant collusion with the “rankystank water in a few puddles on the path and those dense gray clouds that refused to squeeze out a drop. A synthetic insanity to the weather, the city, the people, all sulking, all plotting who-knows-what.”