Scented foragers
guided by sun
dance their language
about harvesting
to be done.

Nectar
gathered in sun
made into honey,
Nature’s continuum.

When I entered middle age, I hit a glass wall.

I felt that I was losing my creative mojo—the work was not evolving and I felt the need for more spontaneity. Feeling frustrated, I started to write poetry, seeing it as a medium to satisfy my creative need.

I was no stranger to poetry. As a child, I was a poor reader; I’m a dyslexic, a term that was barely known at that time. But my mother, who didn’t understand why I was such a poor reader, tutored me daily through my middle-school years. Books were a struggle for my tutoring sessions, but when Mom switched to poetry it was fun. She would read the poem first, and with my good memorization skills the words, rhythms and meter clicked with me, and I—for perhaps the first time—felt that I was comprehending written expression, an idea compressed into words.

Suddenly, the words were not my enemy. They were images of an expressed idea!

Three decades later, those boyhood lessons floated back into my creative consciousness as I was struggling to advance my artistic vision and interpret nature with new allusions.

So, feeling stymied with the glass, I decided to write a poem, which led to a series of poems paying homage to native plants.

The challenge of painting a word-picture paying homage to a flowering plant had an appeal to me. Interestingly enough, my verbal interpretation of the plant paralleled my interpretation of a crafted plant in glass—even though I had no idea at the time how to articulate this mode of expression in my art.

As an adult, I was self-taught. While enduring the stigma of being a poor student, I discovered I was not stupid, which motivated me to teach myself. Traditional education, including art school, would have just produced more frustration. I wanted to learn about art, so I began a journey of self-education by visiting museums and galleries. I wanted to acquire a broad education that would enable me to become more than a pair of hands; I wanted to become a well-rounded person in ways that would bring artistic maturity to my work, so I began listening to books on tape.

One of those tapes was Walt Whitman: A Life, by Justin Kaplan. I was introduced to an unusual person of heroic stature—someone who was largely self-taught. Whitman, I realized, to my delight, expressed nature in an intimate way that would come to influence my work.

After I read the line from “Spontaneous Me,” from Leaves of Grass… 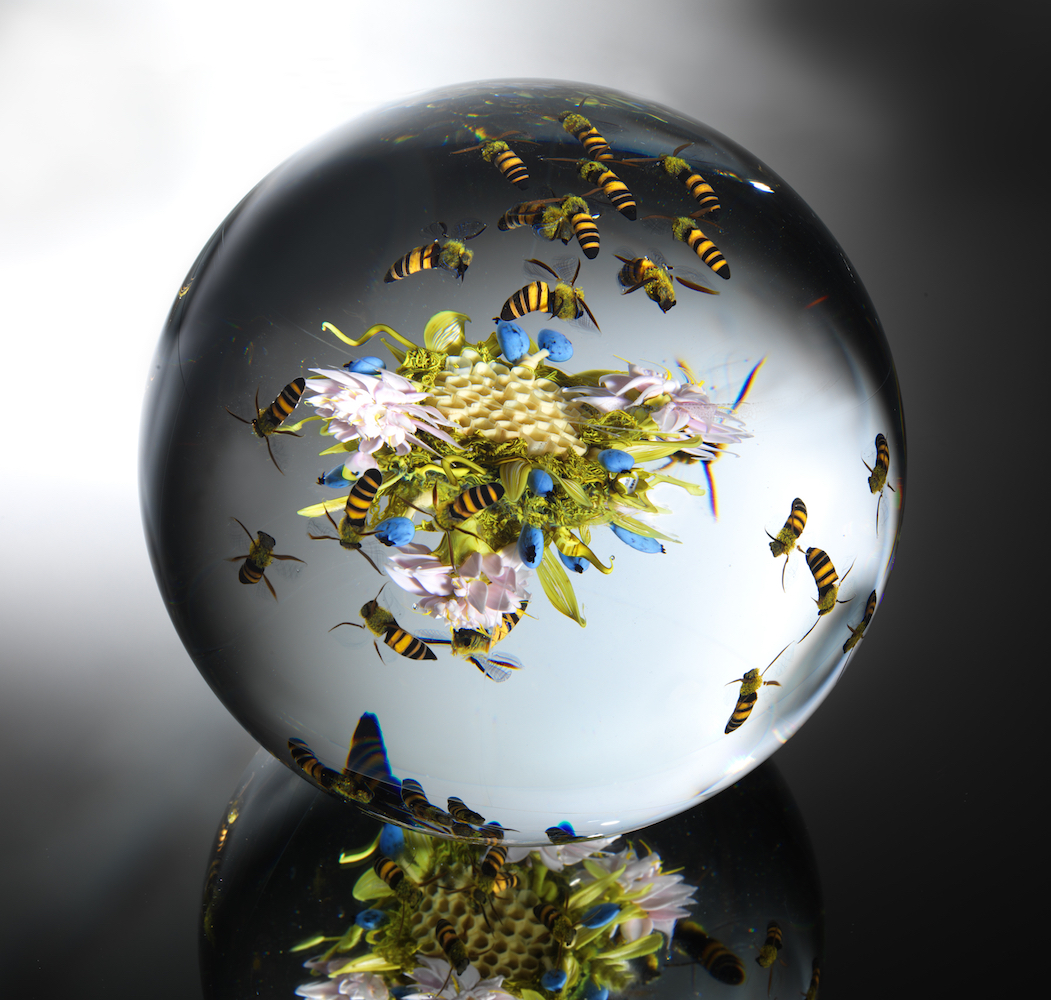 The hairy wild-bee that murmurs and hankers up and down…

…I went outside in the hot summer sun and captured a honeybee in a jelly jar—and was surprised to notice how hairy it actually was. That led me to experiment with the hairy allusion in glass. This made the bee a credible component that was a focal point of my floral interpretations.

But there was more to it than just reproducing the hairy aspect of the honeybee: the influence of Whitman, exemplified by his poetry, led me to interpret nature referentially. As a result, I began to learn from the process.

As I re-read my favorite Whitman poems, I noted in many instances he went beyond realism, along a journey leading to an almost spiritual realm. His words challenged me to attempt the same journey: to go beyond crafting realistic botanical models.

Like most, I didn’t connect with Whitman’s genius on the first read, and began to revisit the poems in ways that eventually allowed me to absorb the insightful intimacy of the words as they formed pictures in my mind.

The influence of Whitman’s words, coupled with my respect for his genius, led me to display excerpts of his poetry on the walls in my studio and exhibitions. Whitman was my guide through walks in the woods and Leaves of Grass became my textbook. I wanted to articulate the same depth of feeling on a visual level in glass as Walt did in words.

I was touched by the abstract idea of how Whitman portrayed a morning glory in “Song of Myself.” He elevates a simple flower to a spiritual level: 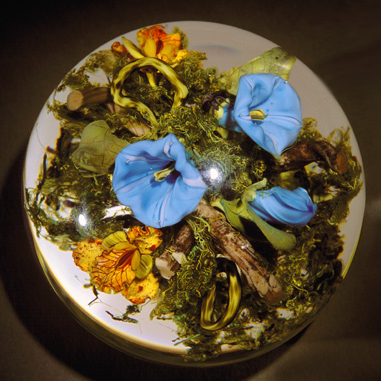 My poem about blackberries, as well as my later glass interpretations, were complemented by Whitman’s unusual word choices, enhanced by the spiritual force relating to all living things. He expressed this in another line from “Song of Myself”:

…the running blackberry would adorn the parlors of heaven

As a craftsperson who worked with his hands for four decades, I was heartened with Whitman’s intuitive insight into hand skills when I read this line from “Song of Myself”: 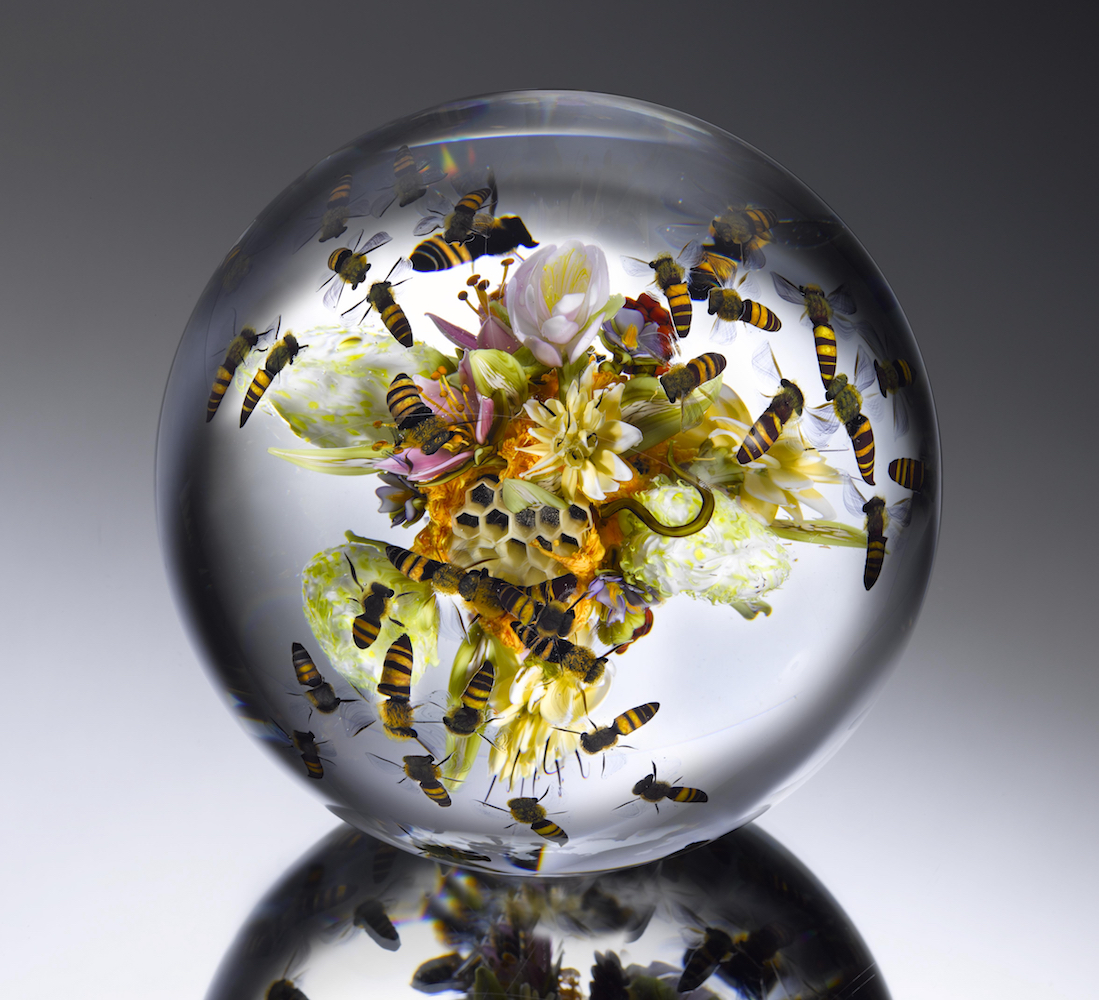 …the narrowest hinge in my hand puts to scorn all machinery

Whitman’s poetry led me to pursue a convergence of writing, teaching, and glass art-making. I hadn’t been to art school and didn’t share the often-exotic influences referenced by my contemporaries. But Whitman infused me with confidence. His celebration of the ordinary as extraordinary gave me pride in my celebration of the familiar things into crafted glass components: blossoms, bees, roots and leaves encased in glass. 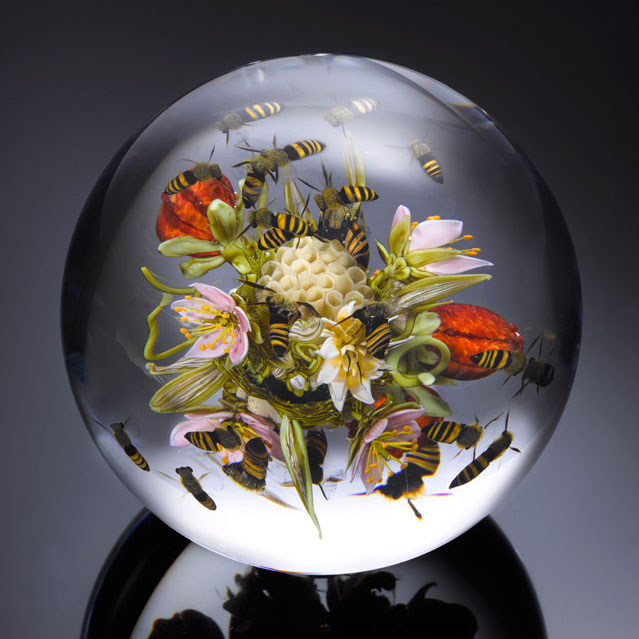 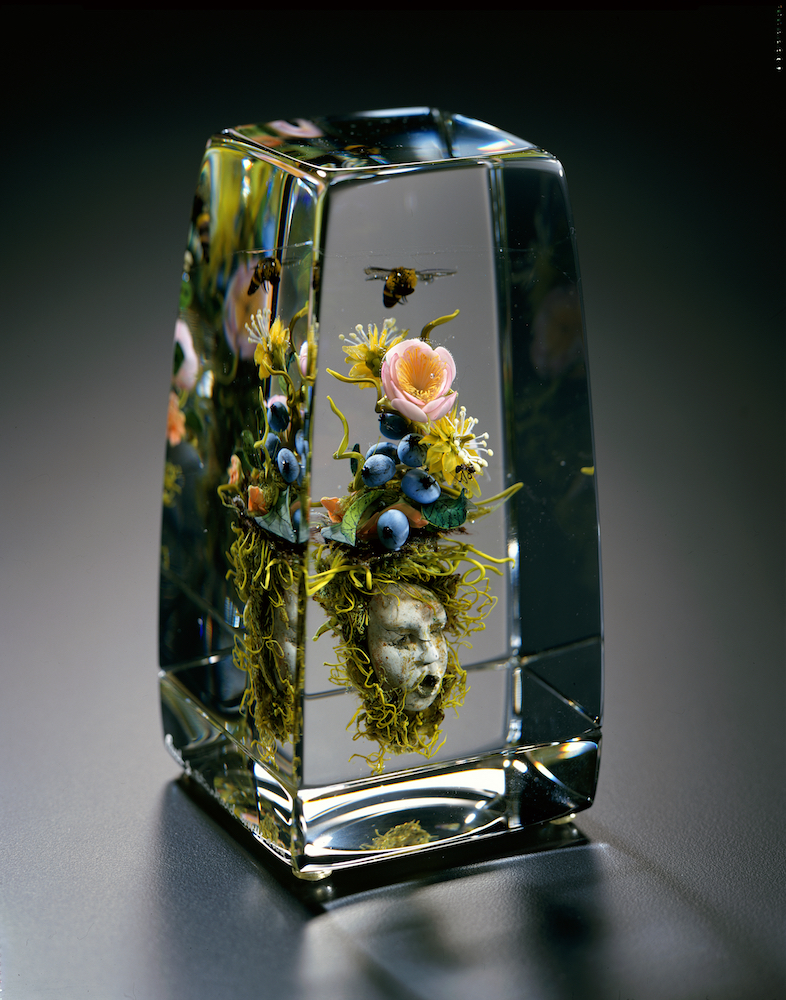 During his time, Whitman thought that his poetry was under-appreciated and that his worth would only be understood by future generations. Similarly, this idea of spiritually connecting to the future, long after I die, motivated me to write this poem, which I offer as homage to Walt Whitman: 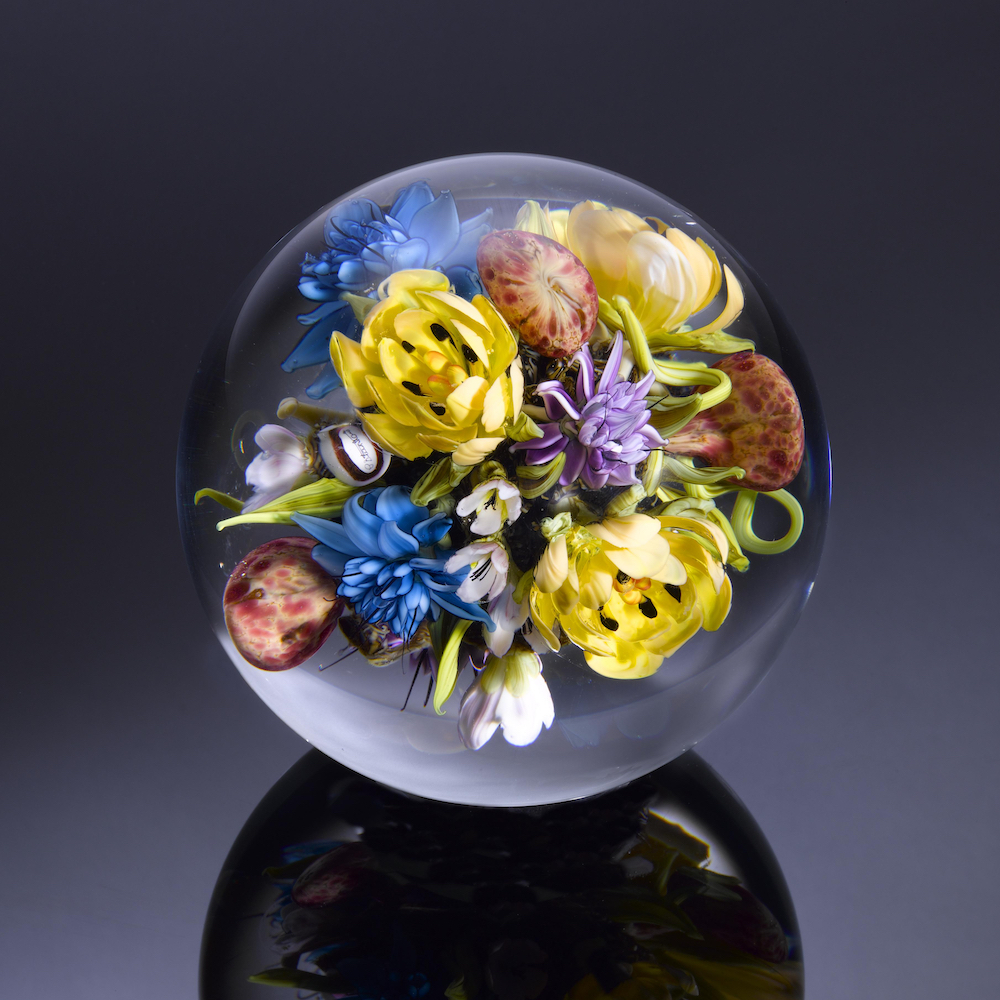 Receive this glass
it holds my memories
crafted blossoms
suspended in stillness
to be pollinated by your sight
anticipating your touch
through time. 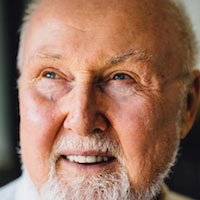 Internationally acclaimed artist and pioneer in the studio glass movement, Paul J. Stankard is considered a living master who translates nature in glass. His work is represented in over 80 museums around the world. Stankard is the recipient of numerous awards and honorary doctorate degrees. He most recently received the Masters of the Medium award from Smithsonian’s The James Renwick Alliance and the Lifetime Achievement award from the Glass Art Society. He is an Artist-in-Residence and Honorary Professor at Salem Community College. Stankard authored three books: an autobiography in 2007 titled No Green Berries or Leaves, an educational resource in 2014 titled Spark the Creative Flame, and most recently, Studio Craft as Career: A Guide to Achieving Excellence in Art-making. Visit Paul and his works at paulstankard.com