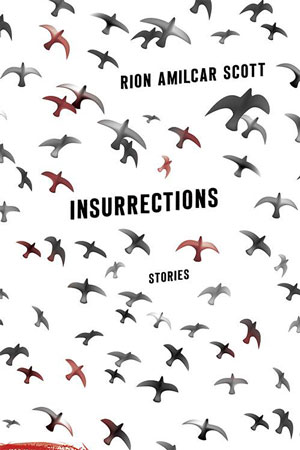 The stories in Rion Amilcar Scott’s debut collection, Insurrections, are set in Cross River, Maryland, a small East Coast city you won’t find on any map. The city itself is a work of fiction, but the lives of its inhabitants feel startlingly real. Among the Cross Riverians—or Riverbabies, depending on who you ask—included in this collection are a suicidal father, an old man known as the slapsmith, and a pair of brothers separated by the constantly flooding Cross River, which gives the city its name and divides it into the affluent Northside and impoverished Southside.

North/south, eloquent/colloquial, holy/profane: these dualities are brought to life throughout Insurrections, winner of the 2017 PEN/Robert W. Bingham Prize for Debut Fiction. In their citation for awarding the collection, the judges describe Scott’s writing as: “hard, humane stories, free of grandstanding yet full of grace, that loom in the mind long after reading.” And the judges are correct. These stories are at times hard, filled with moments of violence and helplessness. But they are also humane, alive with innocence and beauty where it’s least expected.

One of the darker stories is “A Friendly Game,” which begins with Casey and Kwayku, two boys who play basketball and make fun of an apparently crazy woman, calling her “Lady MacBeard.” Casey is quiet and awkward. Kwayku is an athletic jokester with loads of pubescent sexual energy. But Casey has one thing Kwayku lacks: a girlfriend.

Jealousy, Casey is sure, is the reason for all of Kwayku’s mocking, because Marcy is Casey’s girlfriend, “ass and all.” But Kwayku’s jokes go too far: first he calls Lady MacBeard Casey’s mother; then, during a heated game, he says, “Watch, man, I’m gonna fuck your girl. What you think about that?” Casey tries to stay levelheaded throughout the story, trusting that Kwayku’s words are hollow, but is finally pushed too far when, in their final game, Kwayku describes the things he claims to have done to Marcy when Casey wasn’t around. After all the insults and harassment, he can take no more. But Casey’s outburst is misdirected; rather than swinging at Kwayku, he takes a large rock and hurls it at Lady MacBeard, “striking the top of her forehead” and knocking her out. And then:

Casey looked into Kwayku’s face, hoping to see something other than what he saw: a stare of revulsion and pain. It looked like a fright mask, forever molded into an expression of rubbery distress. And Casey couldn’t help it, or even explain it, but it brought him laughter. He laughed like hell until burning water spilled from his eyes onto his cheeks.

By the end of the story, Casey has lost his stolid exterior. He’s been sympathetic throughout, taking Kwayku’s abuse without retaliation, but the hard truth of the story is that we often hold in our torment until it’s too late, then take it out on the wrong person. The burning tears spilling from Casey’s eyes are a bitter reminder that doing the wrong thing feels vindicating when you’ve suffered so much wrong yourself. 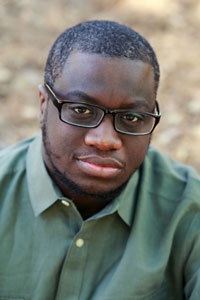 But Scott also shows us the small ways that life is beautiful. An unemployed father teaches his eleven-year-old daughter to play chess in “202 Checkmates.” One of her first lessons: “Chess is like real life. The white pieces go first so they got an advantage over the black pieces.” The father shows himself capable of joking and intimacy over the chessboard, something unusual in their home. Her father goes on to crush her in game after game, the daughter tallying her losses vigilantly throughout the story, her respect for her father’s skill mounting.

Despite losing once, then 57 times, then 201 times, she always remembers that “if a pawn makes it to the other side [of the board] it becomes a queen.” She never forgets the image of “a little pawn magically blossoming into royalty on that last square.” She says: “It became something I longed to see. Sometimes when all was lost, I’d just inch a pawn forward, but the piece never made it.” She holds on to this hope of her pawn becoming a queen, just as many of Scott’s characters hold on to the thing they long for as the world throws stones at their heads.

Over the course of these many losses, the daughter has improved. She’s been visiting a nearby park, where players congregate around boards to play chess in public, and learning new strategies from these strangers. In their 202nd game, the daughter’s newly acquired skill gives her father something to sweat over. She’s moving in ways he’s never seen, and it’s clear he’s worried about the game. This is how she describes the moment when she has her father, for the first time, close to checkmate:

I imagined my father’s mind racing, cataloging everything that had ever tumbled down around him. I put my hand on a bishop, my would be assassin, and thought of my father’s heights when he won, how he galloped around. The depths of his despair at losing, I expected, would be equal to the peaks. He’d mope about, his face fallen and miserable, his posture stooped as if his back ached. I took my hand from the piece and leaned back in deliberation.

Although she slyly lets her father take the game, the daughter finally gets a pawn across the board and becomes a queen. Her kindness, in not defeating her father at his own game, is repaid with a brief moment of grace, the blossoming she’s waited for all along.

There are many other moving stories in Scott’s collection, most of which were originally published in literary magazines before the book’s release. Insurrections is an invitation into the inner lives of people in hard circumstances, but it is also a highly imaginative collection. One of the more unusual stories, “Party Animal: The Strange and Savage Case of a Once Erudite and Eloquent Young Man,” uses footnotes to cleverly introduce Reverse Animalism, a disorder that causes functioning members of society to retreat into the wild and abandon civilization. This disorder concerns scholars in Cross River, who fear for the future of the afflicted. Those suffering from Reverse Animalism might be on to something, though. Life in Cross River is often difficult, sometimes cruel, as Scott knows life is for many of us. When Scott’s writing ventures away from strict realism, as in the invented disorder in “Party Animal,” the imagined world he creates captures something intensely real. In each of these thirteen stories, there is surprise and sadness, Scott’s beautiful language and the deepening mythology of Cross River. These stories consistently achieve the level of the best hard, humane fiction.

THE INVISIBILITY CLOAK, a novel by Ge Fei, reviewed by William Morris