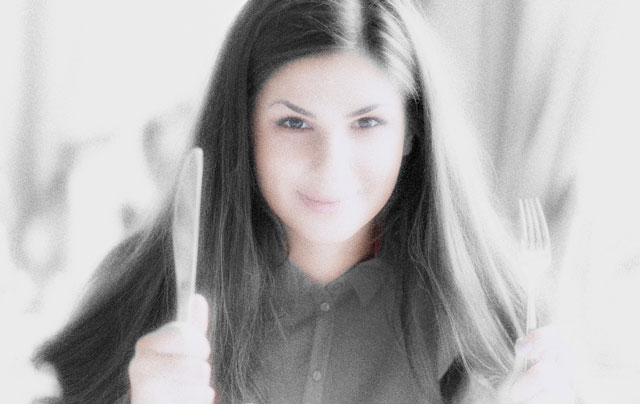 I was sitting at my friend Bebe’s kitchen table. She was standing at the counter using a black and yellow handled screwdriver as an ice pick. I was telling her about it while she chopped.

When I tell you that she was the most beautiful woman I have ever seen, you best believe me. She sat like a picture; real still, you know, with her middle swayed, shoulders back.

Louis shouted at me from the counter. If you don’t pick up three, I’ll give it to Gwen.

Give it to Gwen. Like Gwen needed another table. She’d already cycled through her station twice. But me? Oh no, not me. I was stuck with a foursome at table one that had been there since my shift started and a couple at table two making a night out of dessert and coffee.

Anyway, I poured a glass of water, added a lemon wedge and walked to table three.

Hello. Is this your first visit to Brownwood’s?

Her skin was perfect. She looked airbrushed.

In that case, if you don’t mind, I’d like to tell you about our specials and answer any questions you might have about the menu.

By all means. And then she smiled.

Bebe, when she smiled I could hardly remember my own name let alone the specials. Her teeth were perfect. I don’t even think they were capped. I couldn’t stop staring at her mouth. She had this extra little pucker around the cupid’s bow and her lips were glossed in a very tasteful nude-colour.

That sounds delicious, she said.

Shall I give you a minute to decide?

What can I get for you?

I’ll have the specials.

All of them, she said. And I’d like a house salad with extra bleu cheese dressing. And do you have spinach of any kind?

I pointed out the spinach queso starter and the creamed spinach side.

Excellent, she said. I’ll have both.

Will that be all?

Would you like to start with the spinach queso?

I’d like it all at the same time, she said.

So I took the menu from her and went over to the posi-touch and started tapping in the order. It took me a long time because I had to over-ride the system so that everything would go at once. If you placed an order for say a starter, a salad, a main and a dessert, it’ll automatically put a few minutes delay on each course. Stagger them, you know.

I walked the long way around so that I could check on my other tables, still gabbing, all of them.

Refusing to make eye contact with me, refusing to be rushed. I mean, seriously, Bebe . . . how do they think I’m going to make a living?

When I came through the alley Louis pulled me to the side.

What the hell is this?

Send it all at once, I said.

He took two steps back so that he could see.

Where’s the rest of her party?

I think it’s just her.

Louis shouted to the kitchen.

He started to walk over.

Well, I mean, I don’t know how to explain it but I felt this strong urge to protect her.

No, I said. Leave her alone.

Nobody comes in by themselves and orders food for four or five people. What’s her deal?

I shrugged my shoulders.

Fine. You’ll be paying if she skips.

Fire it up for table three, he shouted to the kitchen.

The house salad with extra bleu cheese dressing was already sitting in the window, so was the spinach queso. Gwen ran the salad before I could tell her to wait and so I decided to take the spinach queso too.

She smiled at me again when I brought the food.

Don’t worry about it, she said.

I went back to the salad station so that I could watch her without being too obvious. She pushed the plate with the house salad to the far right of the table and she put the bowl of spinach queso at twelve o’clock. I folded napkins while the rest of her order cooked.

She sat there with a devastatingly placid look on her face. She looked around the restaurant and admired the paintings, watched the other customers. She seemed genuinely interested in what was going on around her. She looked comfortable, not at all conspicuous. She sipped her water but she didn’t touch the salad or the queso.

When Louis sent the mains the table was crowded, barely room.

I gave her a few minutes and then I went to make sure everything was OK.

Can I get you anything else?

Not right now, she said.

The foursome at table one had left without bothering to ask for the tab. They left two twenties and a ten which covered it, barely. I cleared the table and told the hostess that I was ready to be seated again.

It’s a slow night, she said. You’ve already been cut.

I was feeling pissy at that point, Bebe. It’s a really pissy feeling when you go to work and don’t even make enough to dry clean your uniform, you know?

As I walked back to the kitchen the woman got my attention and gave me the bring-me-the-bill, air signature. I thought, fuck it. But I smiled and got her the tab.

No thanks, she said.

Everything was exactly as it had been placed. She hadn’t taken a single, solitary bite out of anything. I was in a mood by then, a real mood, and I don’t know why but I just stood there. I stood there and stared at that big table of untouched food.

Oh, I’m sure it’s all delicious.

There was a time when I would have eaten every single bit of this, she whispered.

Everybody deserves a treat now and again. I whispered too.

It wasn’t just now and again for me, she said. I was fat.

I don’t believe it. You’re gorgeous.

I was morbidly obese.

Bebe, I did. I did look closer. I looked into her big green eyes and, I swear, what I saw there liked to broke my heart. All I could think to say was, would you like to see the dessert menu?

She laughed. I was never a sweets girl, she said.

Then she paid and I cleared the table.

Bebe was filling a graduated blender with ice, midori, whisky sour mix and Sprite. When she realized that I had stopped talking she looked at me.

Then what, Bebe asked.

Then nothing, I said. She left.

Did she stiff you?

Oh. And she didn’t eat any of the food?

I felt my bad mood coming back. Bebe didn’t get it. I didn’t want to explain.

People are strange, she said.

Bebe turned on the blender and the noise of the blender made my teeth hurt. She bent close to the blender and watched the green liquid spin. I closed my eyes and tried to imagine a different life, a different place. I thought, somewhere in the world there is a place with black-sand beaches and old, grey-boarded fishing boats anchored just beyond the break, sorting the daily catch; rejoicing. 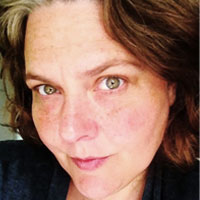 Amy Burns holds a PhD in Creative Writing from The University of Glasgow. She currently serves as the Managing Editor for Mulberry Fork Review. She is nearing completion of her second novel and is represented by Lucy Luck Associates. For more about Amy please visit: http://amyelizabethburns.com/