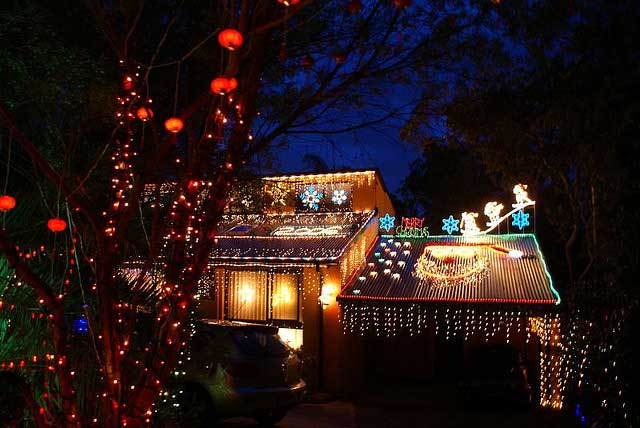 In the flat, heavy heat, I was walking home from the Christmas dinner in our small country town with my wife. There was a cool change trying to affect the heatwave that had made everyone sweat and complain for the past week and as a result there were muscles of blustery wind, and random flashes of lightning tailed by crunching thunder; a thunder that really never ended, a continual electric sound like a large concrete ball rolling around on the wooden floor of an old Scout Hall. At times, the elements combined and parted layers of cloud, allowing the moon to spot the ground at certain points. It was past midnight and the roads and tracks of the small country town were empty. People in their homes didn’t see the gum tree branches thrashing at the power lines in the wind. Only my wife and I saw the goats tethered to the lamp-post out front of the old morgue sitting quietly in the dark watching as the wind took their hay bales away straw by straw. They were all waiting for Christmas; waiting for something magical to happen, for some Christmas cheer to occur as if Christmas cheer was a panacea for human hardship, or the key ingredient in therapeutically diverting them from their own personal existential conundrums, the questions their reptilian brains refused to address; resulting in visions that chilled them intermittently, even in their sleep, evidenced through dreams of giving up on life by driving their dream-cars, filled with their families, off cliffs next to dream-roads into a frozen blackness then waking with a start to the blankness of their lives. These people didn’t see the fallen limbs that we dragged from the road to the shoulder. No-one saw my wife and I, arm in arm sipping piss-poor Shiraz from the bottle, a bottle whose cork had disintegrated into the wine over time. We found ourselves continually spitting out cork and wine, whilst walking, and kissing. We had taken the wine with us as a traveller from the Christmas dinner that we had for the most part enjoyed, put on by the local recreation reserve volunteer committee. Cutting through the old racecourse recreational reserve, which saved a good six to seven minutes of walking, there were no animals to be seen anywhere; only the old winning post was visible in the random moon and lightning. The old winning post, now a series of aged concrete blocks and steps with a remnant of corrugated iron roofing, was saddled with a story of a nineteenth century Victorian Governor who had sat in that very spot, and abused the jockeys and horses through being drunk, on one particular occasion. Just beyond the boundaries of the racecourse and lit with an extensive range of Christmas colors, a small group of three houses were bunched together, across the way. From a distance it could have been a mini-carnival, or a group of emergency service vehicles attending a silent Christmas incident. One home in particular had lights all the way along the enormous front wire fence. Flashing three different colors the herd of electronic deer signified the centerepiece of the Christmas display, being beautifully lit, flashing and moving simultaneously as if to eat grass, then, miraculously, raising their heads, as if to detect a predator in the wind, then returning to eating the grass, then raising their heads in a slow, lifelike fashion. The dirt roads we continued to walk intersected dry paddocks, which were a blunt bronze in the random lightning and moonlight, until we met the hill where the darker bushland and Ironbark forest started. Here the wind was pushing the trees over one way then the other, and we could hear nothing but the wind through the trees as we were being showered with debris and leaves and twigs. In flashes of lightning we saw scores of sheep huddled together at the bases of hundred year old trees, frozen with terror driven by their primordial instincts to self-stupefy. We felt small and afraid and held onto one another, and the bottle. 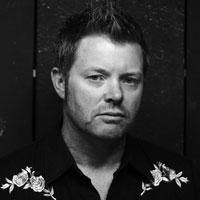 Neil Boyack was born into State Care in 1967, married in Las Vegas in 1997. He has kids, a wife, and lives in Australian wilderness dotted with old gold mines and ghosts. He lives on solar power, and water tanks. He loves reading, writing, and cutting wood. He is the director and founder of Newstead Short Story Tattoo and has had stories and poems published worldwide. Check his website for all available work: www.neilboyack.com.