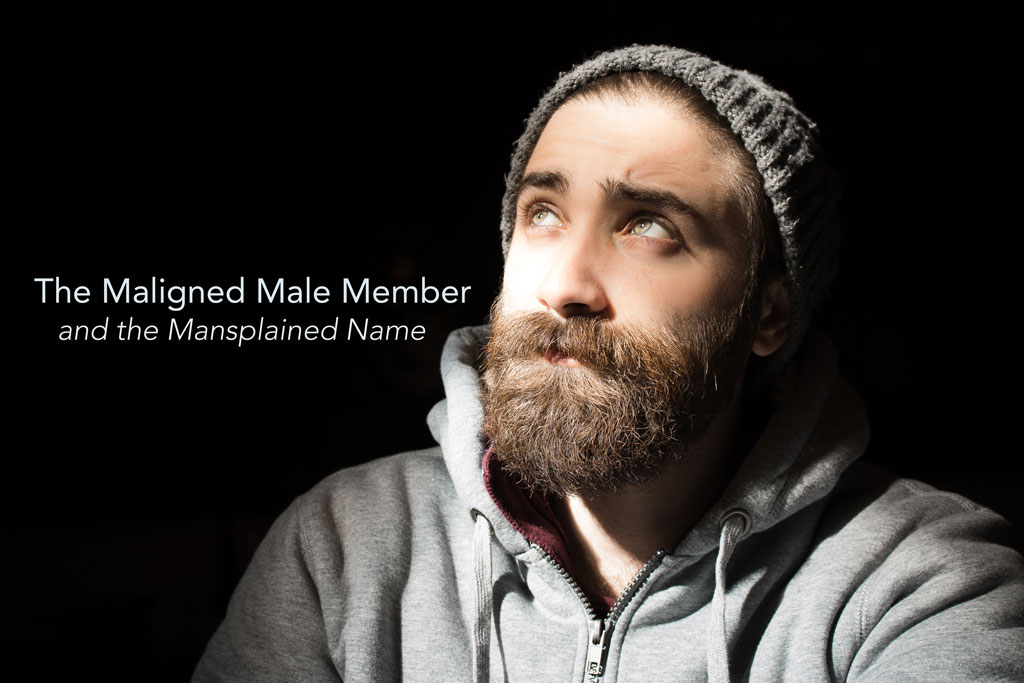 Although I agree that there are an astonishing number of nicknames for the penis, I can actually come up with only a few that are regularly used as insults. How many people say “That dude’s such a Johnson!” or “Don’t be a willie”?

I also disagree with your assessment that “everybody” thinks it’s okay to use the male terms and not the female ones. But I grasp your broader point. Besides, upon examination I find that I am one of those people who occasionally, in highly informal situations, use a couple of the less creative male-member nicknames (specifically, those ending in “ick”) to express extreme disapprobation for a man—almost always one I find overbearing and mean—but never, ever disparage a woman by referring to female genitalia.

Okay, so why do I, and many others, make this distinction? Is it fair and justified? Is it understandable, at least?

Although, of course, none of these words has any place in polite, scholarly, etc., conversation, I do find that the c-word (and the less-used t-word) crosses a line the p- and d-words and their like do not. The obvious reason is the relative power of men and women. I am not sure people say “honky” any more but, if they do, it strikes me as far less offensive, in almost any situation, than the n-word, given the history and current state of racism in our society. Similarly, words disparaging white people tend to, and should, become more offensive as their target becomes less apparently powerful—as with “poor white trash” or, if applied to an ordinary citizen and not, say, a powerful politician or someone who just shot you, “cracker.”

It also seems to me, although reasonable people (including one watching ESPN in the next room) may differ on this next point, that words like “prick” and “dick” actually connote a misuse of power, or at least an overbearing or nasty person. The c-word, on the other hand, is sometimes used simply as an expression of total dismissive contempt. This makes the use of the male-directed insults somewhat more understandable.

Justifiable, though? Although I have a soft spot for the judicious use of vulgar insults against the powerful and obnoxious, I can see why the higher-minded among my readers would object to the reductionism—and lack of linguistic originality—of ever referring to anyone, male or female, as a sex organ. Far be it from me to encourage moronic metonymy or simplistic synecdoche among this magazine’s exquisitely-educated readership.

If, as it appears from your letter, it’s not the reductionism and immaturity per se that bug you, but rather a sense of unfairness engendered (tee-hee) by your sense (however erroneous) that women have come far enough that they should be able to take as well as dish out organ-specific insults, you could always turn to gender-neutral naughty body parts for your name-calling. “Asshole” comes to mind.

How should I tackle men—or women, but so far it has always been men—who tell me that I pronounce my own name wrong? Sometimes it is young men who are peers, but most of the people who have “corrected” me are patrons or clients (I am a freelance artist and art teacher) I would not want to offend.

By the way, my name has a Gaelic root, and my parents chose a variant pronunciation of the name that is used in an old Irish ballad. So the pronunciation is hardly “wrong”—not that this matters.

I don’t think we have to spend any time debating the merits of “correcting” people’s pronunciation of their own names. Either these men are trying to impress you—which seems gauche in the extreme, since they have picked one area where you are virtually certain to know more than they do—or they are trying to parade their knowledge, perhaps even establish superiority over you, which strikes me as both gauche and condescending, maybe even bullying.

In cases where you don’t need to worry about giving offense, there are any number of ways to respond to these benighted individuals. You could simply say: “Hey, it’s my name. I own it. Let’s move on.” Or, if you want to keep it light, you could smile and roll your eyes, then say: “How about we change the subject?” If you want to display a bit more irritation, you might look skyward and say: “I can’t believe you are telling me how to pronounce my own name.” If you have the urge to educate, you could try: “I’ve heard that maybe a hundred times, but thanks.” Or, if you want to add a note of self-righteousness, and perhaps even move them, this could work: “What’s good enough for generations of my ancestors, including my mom and dad, is good enough for me.”

If you want to be more pleasant, you could say something like, “So I’ve heard, but my folks liked the way it’s pronounced in an old song.” A response like that is also good because it works for just about anybody, from the callow youth who somehow thinks you will find his knowing about your “real” name attractive, to the pedantic art collector who wants to show off his superior education and put you in your place—and knows you are not in a position to take offense. In the latter case, you might use a slight variant where you refer to the song as “the famous old song,” or even recite its title, preferably in mellifluous Irish. Since the pedant probably won’t want to admit that he does not know a famous song, this should put an end to the conversation.

The more I think about it, the more I like the idea of an all-purpose answer. Having one will save you the time and trouble of tailoring your response based on motives and power relations. With luck, it will become second nature to you, and leaving you a little more time to devote to your art.

There may still be those who pester you about your name, and think that kidding you about it is an example of that horror some call “good fun.” And, to be fair, even genuinely nice human beings sometimes like to focus on one or more of another person’s quirks as a way to establish what they see as an easy familiarity. My dry cleaner does that. (I’ll spare you the details, but pet hair is involved.) If this happens to you, and the person really is well-intentioned, decide how long you are willing to put up with it and then let them off easy. (“Hey, enough with my name, okay? Just call me [Insert Correctly-Pronounced Name Here] and I promise I will never call you [Insert Some Silly Pronunciation of Their Name Here].” Then laugh.)

If the pesterer is one of those patrons/clients, and you have tried civil measures—making it quite clear to them that you have heard it all before and are fond of your name—you may just have to grit your teeth. But nobody should have to make you choose between your livelihood and your sense of who you are. If at all possible, charge those clients a little extra and try to get a bit more money, or at least free wine and cheese, from those patrons.

Ask June: The Squirreling-Away Spouse and the Prolix Writer