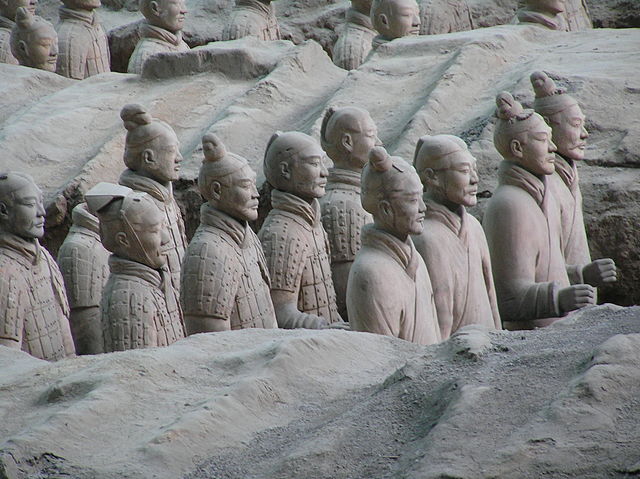 The day a welding rod shimmied down Zou’s collar and combusted his shirt into singed tendrils, the same day my stomach caught traction in the scoop of his lower back and I knew I was in love, also the same day the building gave way, all of us died.

It’s how these things happen, I guess. During our lives our bodies ricochet along until all we stumble into, all that’s rolled our ways, amasses into these blurred mirrors (I’m getting at corporeality here; I’m getting at ghosts). The building’s integrity flagged, and we all lurched ground-ward in common cataclysm.

It sure did surprise us. I mean, we built this place. Just that morning we’d been gawking at Zou’s computer at an image he’d found. It was what the building would finally look like. Twilight purpled on the Dell’s loose-hinged screen. The sky smoked with purple-bellied clouds in the Dream-Weaver image. Living space in the building would sell for eighty-eight thousand Chinese yuan per square meter. Zou turned, his face cracked in tragic reflection (the last cast of beauty he’d manage). If we, workers from unit 414, stopped eating, in ten years each of us could afford closet space.

Provided we were alive, I said, and ventured a hand to Zou’s hip.

We’re not alive, though. Now we drift through beams. Our handprints beat into climaxing clarity then fade. We have bodies that seem whole, but that are invisible. This is no metaphor.

Those of us who are dead worked long enough to raise the thirtieth floor. Beams glitter, almost blinding in the sun. A river runs beyond that. I could shoot my arms out, open them in front of me like an imitation of God, pierce through air and form a kind of slide-beam, an escalator angling from this skeleton. Down below, white hats surround the spot where we landed. They are looking up but cannot locate me. I’ve taken my white hat off. It’s rough around the rim. The smell of tar should be stinging my nose. We slathered it over joints for water resistance. We knew it would rust over time.

We once smoked Hongmei cigarettes. Smoking’s something off limits when dead. Eating steaming spicy soup, then smoking these cigs, would singe your lungs like inhaling chili peppers. The Hongmeis went for five yuan from street vendors. A red rose with a couple leaves and a thorny stem arced on the cover (a more affordable dream than luxury condos). I offered Zou one that morning. When he refused, I knew he’d really quit. I never smoked myself. Just kept that pack for him. He might’ve noticed that I traced the peck of his fingers that smooshed the filter in no casual, coworker way. He bit the tips. You always knew which butts were Zou’s by the four little incisor indentations, two on top, two on the bottom. I had a half pack at the time of the structural break.

My hand is trembling now. From this height, the wind roars.

The wide-hipped girl who operates the elevator—she’s the one to blame here.

She reads romance novels, almost all day. They’re printed on cheap paper and strung together with thread. The books are pirated, and we couldn’t stop thinking about her being interested in sex. She’s young, sure, and her face is smooth and bronze. Her hair is always in a ponytail.

Her name is Meimei, and she made it hard for Zou to sleep. After a day on the upper levels, after being lowered from the cocoon of bamboo scaffolding and debris-catching netting, I could smell her when she opened the elevator doors—all shampoo and laundry-detergent clean. When she looked up at us from the ground, we must’ve seemed like insects at work inside some bandage. Last night Zou left the encampment. His cot lay empty. I watched and watched but he never came back. I thought he’d left, escaped back to family and (God help him) work that pays.

Below me now, on the ground, the concrete workers mix. No point stopping over a few dead men. Yellow hats have arrived. They have probably parked their BMWs a block down and walked, which is why it’s taken so long. Last year, when the Production Office stalled on paychecks, we squatted around one manager’s car. Yellow hats point with hoarse, smokers’ voices. They’ll want to know why work paused. We’re dead, someone should say.

The intercom crackles beside me. “Hello? Hello?” They ask who is up here though they damn well know.

Meimei must be one hundred and fifty pounds. Plump arms make her hands seem delicate. I studied those hands. What was I missing? I watched and wondered why the answer wouldn’t come to me. Such a simple image had to be hiding intent.

Just minutes before the starting whistle, Zou showed up. Zou and Meimei didn’t look at each other.

He had his gloves in his hands, though, both of them, and slapped them on her hip. A small amount of dust exploded and Meimei’s face flushed. When the elevator gate closed, her eyes trailed him until beams broke her line of sight. The elevator’s pulley engine geysered steam and hissed. Zou stared off over the city, gazing through smog toward the last traces of blurred stars.

“What’d you do that for?” I finally asked.

The elevator gate screeched opened. One gate gave way to the crisscrossing of beams we’d welded, the other to the cityscape. His arms pin-wheeling, I didn’t have time to say I was sorry.

The voice through the intercom is a woman’s now.

It doesn’t matter. We’re dead down there. We fell, and there’s nothing Production or Meimei or Zou’s parents can say to bring that back. 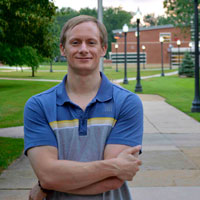 Justin Nicholes received an MFA from Wichita State and is the author of the novels River Dragon Sky (2012) and Ash Dogs (2008). His stories have appeared in The Saint Ann’s Review, Prick of the Spindle, The Summerset Review, Stickman Review, Sassafras, Outside In, The Medulla Review, and elsewhere. He’s the chief editor of The Pavilion and teaches English composition in China.