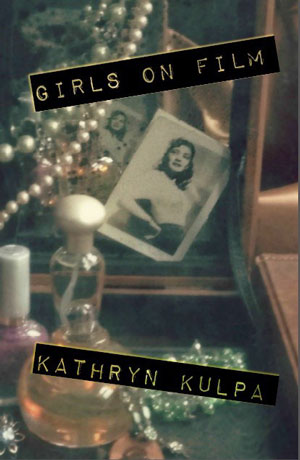 I had the chance to catch up with fellow Cleaver editor Kathryn Kulpa about her chapbook, Girls on Film. It is just out from Paper Nautilus and was a winner of the press’s Vella Chapbook Contest. An intriguing part of the prize is that the writer receives a hundred copies of the beautifully designed chapbook to distribute as she likes. Kathryn will be selling signed copies through her Etsy shop, BookishGirlGoods, and she’ll also have them available at readings, writing workshops, and other events. Paper Nautilus will also have the book on sale. For more about the Vella Chapbook contest and Paper Nautilus Press, have a look at the press’s website.—M.F.

MF: Congratulations on winning Paper Nautilus’s Vella Chapbook Contest, and the publication of Girls on Film. I wondered if you might talk a little about the process of writing the chapbook.

KK: All the pieces in the chapbook were already written, and most of them had been published by the time I put it together, so it was more a process of selecting and matching complementary stories to create a cohesive chapbook. Some of the stories, like the “Child Star” series (“Wendy in Rehab,” “Child Star,” and “Wendy and Brian on the Last Night of the World”) were written about the same characters. I wrote “Wendy in Rehab” first, and the characters stayed with me, so I kept returning to them. Since I knew those three went together, it was a good starting place, and then I looked at other stories that fit thematically. The contest had a limit of twenty-five pages, so I had to cut some stories I really liked, but that didn’t work with the others. It’s a good way to evaluate your work and see the recurring themes that thread through different stories.

MF: I was interested in the way children’s literature had a place in this work. Can you talk a little about that? You seemed to create a little Narnia in a swimming pool.

KK: Yes, exactly! I’ve always been a ridiculously passionate reader—the kind of person who’ll read cereal boxes if there’s no other reading material handy—and so many of my own childhood memories are tied in with books I was reading and the fantasy play that grew up around them. I’m often inspired by fairy tales and their more modern equivalents—comic books, movies, children’s and young adult literature—and the enduring myths they create. I actually have a newer piece that didn’t make it into the book, but that touches on the same theme, where I ask: “Who’d choose the man-village over the jungle? Who’d give up being kings and queens in Narnia to be solicitors and vicars’ wives in Wolverhampton? Who’d choose Kansas over Oz?” Not me—I’d choose Oz, or Narnia, or Hogwarts, in a heartbeat.

MF: You write of “hours of glorious neglect.” Wendy and Brian may have an exaggerated experience of a certain kind of parenting, but it feels true to the culture of the time, pre-helicopter parenting. I feel like you manage to show us nostalgia as a positive force, and I wondered if you would talk a little about the theme of nostalgia in your work.

KK: It’s become kind of a cliche now—oh, kids of the 70s and 80s got to ride their bikes without helmets and stay outside all day without parents—and we did, but there was a dark side to that, for some kids more than others. So I have a true nostalgia for the freedom of that era, the unstructured, unscheduled time that, for some of us, opened the imagination. At the same time, I want to avoid romanticizing it, because there were a lot of Wendys and Brians, kids whose parents were just too self-involved or messed up to be there for them, and you don’t come out of that without some kind of damage.

MF: From black Maybelline eyeliner to yellow sunglasses, your use of color creates a visual progression through the pieces. Is visual art important to your writing? What are some of the themes and artistic elements that you find yourself returning to in newer work?

KK: Visual imagery is very important to me, and I’ve been told my work is cinematic—appropriate for this collection, of course. I have taken part in some ekphrastic poetry and art exhibits in Rhode Island, where writers were matched with visual artists and we created works inspired by their art, or they created art inspired by our writing. It was such a rich interplay. When I teach writing workshops, I often use old photos, postcards, or even found objects as writing prompts, and many of my own stories have grown out of those exercises. The yellow sunglasses image came from a teen writing workshop exercise where I asked students to freewrite images based on the color of a crayon they picked from a box of crayons. (I always do my own writing exercises with my students—it feels like cheating not to.) As far as recurring themes, I often find myself returning to the idea of coming of age, passages, doorways, bodies of water, things that are lost, the separateness of the self, connections and disconnections, orphans, and secret worlds that coexist with our own—which could be literal places or states of consciousness.

MF: Are there writers out there who are particularly important to what you’re up to?

KK: This is the kind of question I agonize about for weeks on end, so I’ll try to avoid listing every author who’s ever influenced me, which would be impossible, and just focus on a few books I’ve found a strong connection to lately. Short story collections I wish I’d written: A Manual for Cleaning Women by Lucia Berlin and 13 Ways of Looking at a Fat Girl by Mona Awad. I just read a wonderful flash fiction collection by Joy Williams, Ninety-Nine Stories of God—she is not a writer I associate with flash fiction, so it was a joy (no pun) to discover this—all the pieces feel so fresh and effortless. Also, the novels Find Me by Laura van den Berg and Green Girl by Kate Zambreno: those are stories that let me fall into them like a wardrobe; I remember staying up all night to finish Green Girl and then wanting to stay up and write. Finally, what I’m reading right now: Kiss/Hierarchy, by Alexandra Van De Kamp—it’s a collection of poetry and prose poetry, some pieces that hover right on the edge of poetry and flash, and there’s a strong cinematic influence in many of them: poems about film noir or about the actress Jean Seberg. Alex has Rhode Island connections, and we met up there recently and noticed all these parallels in our work.

KK: I saw the contest announcement online in a few writers’ forums, and I liked the name of the press—that caught my eye—and their aesthetic, and I just decided to try them. I was a finalist in 2014, and then I entered again in 2015 with two different chapbooks, and one was a finalist and Girls on Film was a winner. The editor, Lisa Mangini, is very respectful of writers, and she gave me a lot of freedom as to the design of the book. I had an idea of the look and feel I wanted for the cover, and I asked a friend, Gigi Thibodeau, who is a writer and photographer, to take some photos that would capture the kind of dreamy, vintage mood I wanted, and she did an incredible job. The mirror, the picture of the 1940s film star, the vintage perfume bottles and jewelry—I didn’t tell her to use those elements specifically, but when I saw those images, I knew they were right for the collection. I also had in mind a kind of DIY look, like 80s mix tapes and early zines, and Lisa found a label maker font that fit that aesthetic perfectly.

MF: Any thoughts about the importance of places like Cleaver and Paper Nautilus for writers?

KK: They’re huge. Small presses, lit mags, online journals—they are everything. When I was a kid and first started trying to be “a writer,” I would send my stories to The New Yorker and The Atlantic and even Ladies Home Journal, because those were the only magazines I knew of—the ones I saw in the magazine racks at CVS. Now there’s such a diversity of lit journals, and it’s so easy to find them online—not only online journals, but even print journals usually have some kind of online presence, so you can read examples of what they publish and learn about their style. It’s much easier for new writers to find a home for their work.

At the same time, the book publishing world has shrunk. There are fewer major publishers, and it feels like the ones that are left have become more conservative, more “brand” oriented, less willing to nurture new talent. But I think small presses are really coming into their own. There are more of them, and they’re publishing strong, exciting voices. Some of my writing friends have published work recently with Engine Books, Rain Mountain Press, and Jolly Fish Press, and I also have work in anthologies from Spider Road Press and Hyacinth Girl Press. That world is opening out, and I think it can only contribute to the diversity and vitality of contemporary literature.

Kathryn Kulpa is the author of Pleasant Drugs, a short story collection, and Who’s the Skirt?, a microfiction chapbook. She is the flash fiction editor at Cleaver and has published work recently in Smokelong Quarterly, The Flexible Persona, Carbon Culture Review, and Litro.

Michelle Fost is a writer living in Toronto. Her fiction has appeared in The Painted Bride Quarterly and her book reviews have appeared in The New York Times Book Review, The Philadelphia Inquirer, and The Boston Phoenix Literary Section. She is a book review and fiction editor at Cleaver.