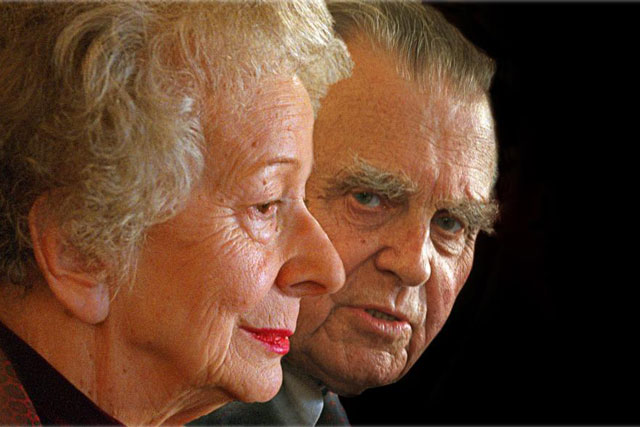 TO STAY OR TO GO INTO EXILE:
Milosz and Szymborska
by Niels Hav
translated by Heather Spears

This year Patrick Modiano received the Nobel Prize for Literature and, as often before, it was a complete surprise when the secretary of the Swedish Academy opened the door and released the name to the press. Every year this event is a celebration, and the joyous news spreads round the world with the speed of light.

I was in Warsaw the year Tomas Tranströmer was awarded the Nobel Prize. Sitting in the mild October sunshine in front of the Literature-House with a group of poets from many countries. It was a few minutes past one, and Transrömer’s name passed cheerfully from table to table. Wislawa Szymborska, Nobel prizewinner from Poland, was asked by a journalist, “What did you think when you heard that Transrömer won the Nobel Prize? “I was so pleased,” she answered, “that I hopped on one foot.”

An unforgettable reply. At the time Szymborska was 88 years old, and the memory of her happy hop is a blessed thought.

Many modern writers have become a species of nomad, living in exile because in their homelands freedom of speech is limited. One of the most important tasks of PEN International is to support imprisoned writers and journalists around the world, and there is more than enough to tackle there.

The written word is regarded in some regimes as a threat, and censorship of both the internet and the printed media is well-known. To avoid criticism, some provide writers with free food and lodging in prison. Very generous, and totally idiotic—what a healthy society requires is free debate and free exchange of views. We do not live by bread alone. It is the duty of the state to support literature in every way; while it is the duty of the writer to write good books and, if necessary, to maintain a critical stance in relation to those in power.

Such is the distribution of roles in a healthy society. When Fleur du mal was published in 1857, Charles Baudelaire was dragged into court and accused of blasphemy. Who was emperor or president at the time? No one remembers or cares today: the political figures have slipped back into the region of shadows while Baudelaire’s book remains, an unchangeable masterpiece.

In Poland’s history, we find examples of the choice writers must face when freedom of expression is not respected—to stay, or to go into exile.

Wislawa Szymborska was born in 1923, she witnessed the Nazi depridation, followed by the Soviet époque of despotism. She stayed in Poland, living most of her life in Kraków, studied, taught and wrote poetry. She distanced herslf from the powerful and concenetrated on her writing. Her collected works number some 350 poems. Asked why she had not published more, she answered, “I have a trash can at home.”

This ironic humour is also found in Szymborska’s poetry. Simple, everyday events are transformed by the power of metaphor into great poetry. Her work is full of an ordinary life’s inventory of objects and situations, as in the poem “Cat in an Empty Apartment”: the cat is alone at home with the furniture, lamps, carpets and bookshelf, while the owner is away—perhaps at work, perhaps dead.

In the famous poem “Nothing Twice”, Szymborska writes: “Nothing can ever happen twice./ In consequence, the sorry fact is / that we arrive here improvised / and leave without the chance to practice.” As for Szymborska, she died for the first and only time in 2012.

One of the nomads, one who chose exile, is Czeslaw Milosz. Already in the 50s he left Poland and settled first in France, then in the USA where for many years he was a Professor of Slavic Languages and Literature at Berkeley, the University of California. In 1980 he received the Nobel Prize. After the upheavals in Poland and the fall of the Berlin Wall, he returned to his native land. It is 10 years now since his death. He was buried in Kraków as, later, was Szymborska.

But Czeslaw Milosz’s oeuvre is still of prime importance for lots of people worldwide. His experiences in youth, trapped in between Nazism and Stalinism, may be compared to the situation faced by many writers today, with the world again in the midst of great disruption and change. How do intellectuals adjust to a totalitarian state? Milosz has thoroughly explored this theme with an insider’s sensibility to its impossible paradoxes.

His work is pervaded by a strong ethos which, coupled with a robust irony, gives his poetry its lasting quality. In the poem “Ars poetica?“ he writes: “Poems should be written rarely and reluctantly, / under unbearable duress and only with the hope / that good spirits, not evil ones, choose us for their instrument.”

In Warsaw, I enter a book store. Milosz and Szymborska are well represented on the shelves—autobiographical works, essays, poems. I buy a cup of coffee, and spend an hour or so nosing among the books and leafing through the Polish journals. Finally I buy “Proud to Be a Mammal” by Czeslaw Milosz—it has to be the one.

I take the bus across the Wisla River to Praga, the only quarter in Warsaw that was not destroyed during the Second World War. The tumbled old houses in Praga have seen Poland rise again in the 30s, watched as Stalin’s and Hitler’s grandiose madness fell to ruin. German and Russian tanks, filled with nervous, cigarette-smoking young soldiers, rolled over these paving stones. Here Milosz could have walked in the 40s, newly composed poems in his shoulder bag, on his way to a reading or to meet a friend.

He relinquished his homeland, went into exile, turned his back on the proclamations of authority issuing from the corridors of power. This is why his poetry continues to be read, and he is remembered around the world. Most intensely by those who have felt, on their own foot, the pinch of the shoe.

Read the full text of “Cat in an Empty Apartment”  by Wislawa Szymborska, translated by Stanisław Barańczak and Clare Cavanagh at the New York Review of Books.

Niels Hav is a poet and writer based in Copenhagen. His publications in English include a book of poetry, We Are Here, as well as poetry and fiction in numerous magazines. In his native Danish, he is the author of six collections of poetry and three books of short fiction. His work has been translated into several languages including Arabic, Turkish, Spanish and Chinese.